Nonparametric Techniques for a Single Sample

(Note: all the previous publications in the basic statistics  category are listed on the right-hand side.  Select "Return to Categories" to go to the page with all publications sorted by category.  Select this link for information on the SPC for Excel software)

This month’s publication introduces nonparametric techniques for a single sample. Over the years, we have produced several publications involving analyzing sample results. For example, you might want to determine if the mean of a process is a certain value. To do that, you take samples from the process and then compare the results using either a t-test or a z-test. Many statistical techniques, like the t-test and z-test for a mean, are based on the assumption that your data are normally distributed.

There are techniques called nonparametric statistical methods that can be used when the data are not normal. These techniques are distribution-free; they make no assumptions about the distribution from which you take the sample.

Please feel free to leave a comment below. You can download a pfd copy of this publication at this link.

We will cover two nonparametric techniques below. These deal with a single sample and discovering something about the population median being sampled. The example data and the mathematical equations to do the analysis come from the book “Statistics and Data Analysis: From Elementary to Intermediate” by Ajit Tamhane and Dorothy Dunlop.

In this test, a random sample is taken from a population. The results are then used to determine if the population median is equal to some value or different from some value. For example, a sample of ten thermostats are taken at random from a production lot. The design setting for these thermostats is 200. We want to know if this is true for the production lot. So, each thermostat is tested. The results are given below.

The sign test for a single sample is used below to see if the population median, based on this sample, is 200. Using the statistics hypothesis route, we are testing the following hypotheses:

The first steps are easy to do. In this example, s+ is 8, while s- is 2. There are 8 values greater than 200 and 2 values less than 200. Step 3 is the one where you make your decision though. Like many statistical tests, you must select the probability of making a mistake. This usually focuses on the alpha value (α). It is the probability of rejecting the null hypothesis when it is actually true. Typical values of α include 0.05 and 0.01. You decide that you want α to be 0.05. This means that there is only a 5% chance of rejecting the null hypothesis when it is true.

You can calculate the p value for the sign test by using the binomial distribution. With this distribution, there are only two possible outcomes. In our example, it is either larger than or less than 200.

The p-value is given by the following equation:

where n = sample size, smax = max(s+, s-) and smin = min(s+,s-). In Excel, you don’t have to perform the calculation shown in the equation above. You can use the BINOMDIST or BINOM.DIST functions with the equation above with the smin.

The p value for the data is 0.110. This is larger than 0.05, the value of α we selected. The conclusion is that the thermostat design setting is not different from 200. We accept the null hypothesis.

where b is the lower α /2 critical point of the binomial distribution.

The first step in finding the confidence interval is to sort the data in ascending order. This is shown in Table 2.

To find the confidence interval, start with the first thermostat setting and calculate the following:

Now go to the second point and do the following calculation:

The output from the SPC for Excel program for this data is shown below. 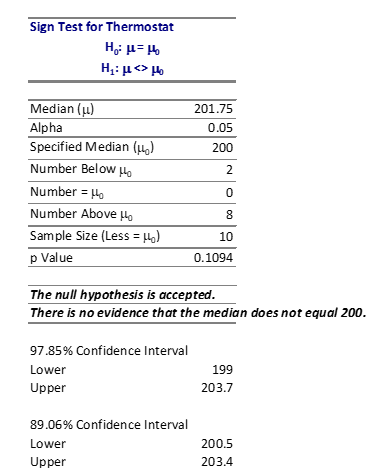 What happens if the sample result is equal to the design setting (ũ0)? The process above assumes that this does not happen. But, of course, it can happen. The easiest thing to do is to ignore ties and just use the rest of the data. This does impact the sample size of course, but it is rare that there will be many samples that equal ũ0. If there are, then the null hypothesis is probably true – or your measurement system needs some work because it can’t tell the difference between samples.

The Wilcoxon Signed Rank Test is another parametric method to analyze sample results taken from a non-normal distribution. In general, the steps are:

Once again, you have to calculate the p value to determine if w+ is considered large or if w- is considered small. This involves the use of the null distribution. We will continue to use the thermostat data from Table 1.

Table 3 shows the thermostat data with the differences and the ranks.

You have to look up this probability from a table of the upper probabilities of the null distribution of the Wilcoxon Signed Range statistic. You can download this table at this link. This table handles samples up to 20. The probability from the table is 0.024. Thus,

Note that p value calculated for the Wilcoxon Ranked Sign test is less than α = 0.05 – so we conclude that the population median is different than 200. The Sign Test did not find a difference.

The Wilcoxon Signed Rank Test has two types of ties. One is when the sample result equals ũ0. Like the sign test, these are ignored. The other tie is when several |di| values have the same rank. In this case, you assign an average rank to them. For example, suppose the first two |di| values are the same and ranked 1 and 2. Then the average range for both is 1.5.

You can calculate a confidence interval as well, but it involves looking at all pairwise averages. We will not do that here.

Figure 2 shows the output for this test using the SPC for Excel software. 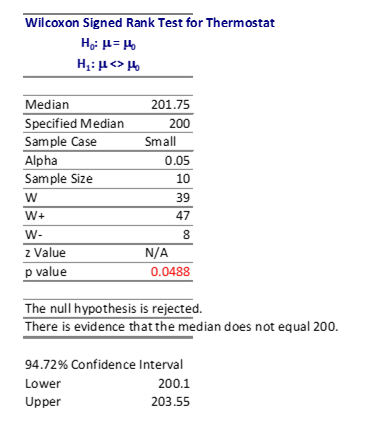