(Note: all the previous publications in the comparing processes category are listed on the right-hand side. Select "Return to Categories" to go to the page with all publications sorted by category. Select this link for information on the SPC for Excel software.)

Sometimes there is a need to compare processes to see if they are the same or they are different. The question you should ask is the same or different with respect to what? Two basic ways processes can differ are in terms of the average and the amount of variation. The Levene's test is used to evaluate if multiple processes have the same (equal) variances. It is answering the question:

Do one or more of the processes have a significantly different variance than the other processes?

Please feel free to leave a comment at the end of this newsletter. You may also download a pdf copy of this newseltter at this link.

The modified Levene's test for equality of variances determines if processes are operating at the "same" variance. Of course, things vary as we know, so the variances calculated from different processes will not be identical. But this does not mean that they are statistically different. The modified Levene's test is used to determine if the differences in variances are statistically significant.

There is also a more visual method of checking for equality of variances. It is the analysis of ranges method. For more information on this technique, see our SPC Knowledge Base article, The Analysis of Means and Ranges.

Suppose we have k processes that are used to make the same material. These processes are often referred to as treatments. Levene's test is just that – a test. So, with a test, there must be something we are trying to prove or disprove. These are given by the null and alternate hypotheses. The null hypothesis for k treatments is given by:

where σi2 is the variance of the ith treatment.  The null hypothesis is that all treatments have the same variance.

The alternate hypothesis is given by:

The alternate hypothesis is that at least two of the treatment variances are statistically different – they are not all equal.

The calculations primarily involve computing Levene's statistic and then comparing this statistic to a critical value or a p value. This statistic is denoted by FLevene and is given by:

Dij is the absolute deviation of observation j (Yij) from the ith treatment median (Ãi):

Di is the average of the ni absolute deviations for treatment i.

D is the average of all N absolute deviations.

It is the use of the median in Dij that makes this the "modified" Levene's Test. You could use the treatment average in place of the median.

Consider a situation where you are examining four different treatments that are used to produce the same material. Note that a "treatment" can be as simple as changing operating conditions, raw materials, etc. Fifteen samples are taken from each treatment. The results are shown in Table 1. The four treatments are A, B, C and D

There are total of sixty results (N) over the 4 treatments (k).

The calculated average, standard deviation, and variance for the four treatments are shown in Table 2.

The test involves calculating Levene's statistic as shown in the equation above. The first step is to find the median for each treatment. You can use Excel's MEDIAN function to do this. The medians are given below:

Table 3 contains the absolute deviations from the medians for all the results.

Another value needed to complete the calculation is D, which is the average of all the absolute deviations. This value is 8.52.

Look at the last two sets of averages: the four individual treatments and the overall. Can you begin to draw some conclusions? It is clear that Treatment D has the largest deviation. This means there is more variation in Treatment D than the other three.

Treatment C has the smallest deviation. This means there is less variation in Treatment C than the other three. Do we conclude that these are "real" differences?

Everything varies. We aren't going to get the same result each time. The question is:

Are any of these differences statistically significant?

The modified Levene's test is going to answer that for us.

The numerator in Levene's statistic is:

The denominator in Levene's statistic is:

Once again, consider the first sample for Treatment A. The value of D11 was found above in Table 3. It is 0.1. The value of the average absolute deviation for this treatment (6.99) is then subtracted from D11. Then:

Table 4 shows these calculations for each result.

Table 4: Square of Deviation of Each Result from the Treatment Median

Levene's statistic is then given by:

Finally, we have the value of Levene's statistic. Now what does it mean? Is it significant? Are the variances the same?

Deciding if the Variances are the Same

So, based on our analysis, we conclude that the four processes are not operating at the same variance.

Will Control Charts Help in this Analysis? 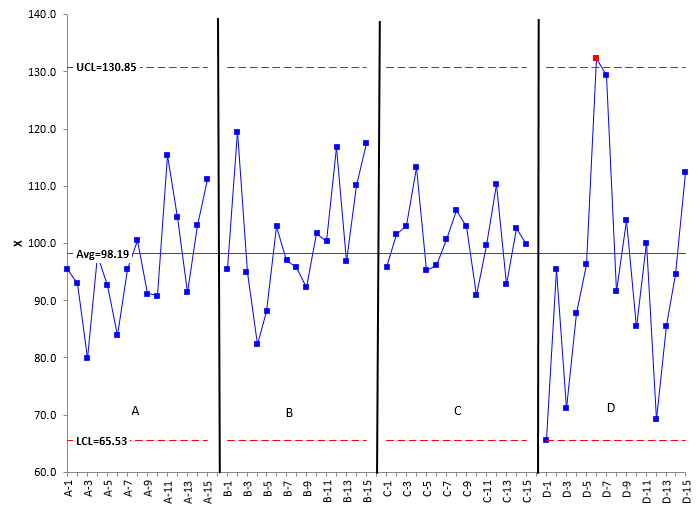 What does Figure 1 tell you about the four treatments? They appear to be operating around the same average, no significant difference. But there seems to be more spread in the data for treatment D. In fact, there is an out of control point for Treatment D when you consider all treatments in calculating the average and control limits. The moving range chart should confirm the more variation in Treatment D. The moving range chart is shown in Figure 2. 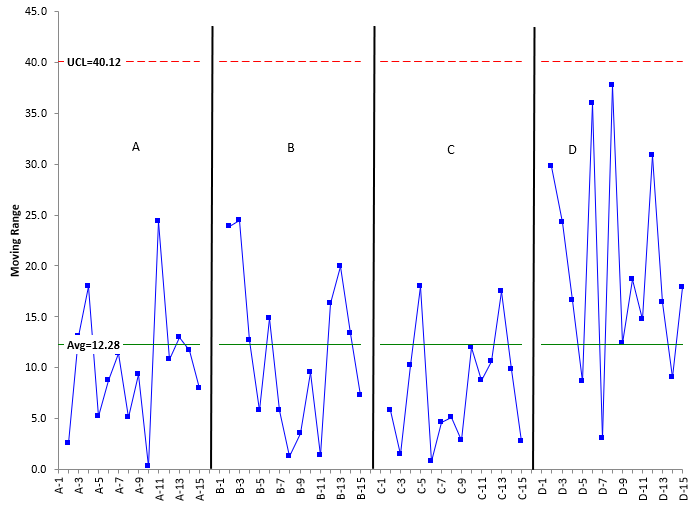 It is clear from Figure 2 that treatment D has more variation than the other three. You could do a X-mR chart for each treatment. If you did, you would find that each treatment is in statistical control (consistent and predictable) and the average moving ranges (mR)for the four treatments are:

The calculated and estimated statistics are fairly close and show the same pattern. Treatment D appears to have more variation than the other three treatments. Control charts, as usual, do provide insights into the process.

This publication examined how the modified Levene's test for equality of variances is performed. It is useful when there are departers from normality.

Levene's statistic is calculated and compared to either a critical value of F or to a p value to see if there is reason to reject the null hypothesis that all the variances are equal. There are alternatives to this test, in particular the Analysis of Means and Ranges and Bartlett's test.