The various parts of this worksheet are described below.

The design table is at the top of the All Factors Analysis worksheet.  This classic design table shows the standard runs and the results.  The design table for the etch rate example is shown below.  The significant effects are in bold in the row labeled 'Effects.'

The information below the design table starting with the row labeled "Sum +" is the table analysis using Yates's algorithm.  This will be demonstrated using Factor A results.  The rows perform the following functions:

The last row in this section is labeled MSE.  This stands for Minimum Significant Effect.  It is one way of determining which effects are significant.  The equation for MSE is:

where t is the t value for 95% confidence with the degrees of freedom =  number of factorial observations – number of cells, σ is the estimated standard deviation obtained from the range values, and N is the total number of factorial runs.  In this example, MSE = 47.7028.  If there is only one replication, a different method is used to determine which factors are significant.

When multiple replications are run, the program uses the range values to estimate the variability in the process and to check for out of control situations.  The output for the range control chart on the All Factors Analysis Worksheet is shown below as well as the calculations.

The average range and the control limits are calculated using the following equations:

where Ri is the range of standard run i, k is the number of range values, and D4 and D3 are control chart constants that depend on the number of replications (the subgroup size).

There is no lower control limit on a range for 2 replications.  The values for D4 and D3 for various subgroup sizes are available in many publications and on our website.  Since no range value is above 158.8579, we conclude that the ranges are in statistical control and there were no special causes present when the experimental design was run.  The residuals analysis will also check to determine if there were any issues present when the design was run.

Note that the average range is used to estimate the value of the standard deviation used in the MSE equation above (where d2 is a control chart constant that depends on the number of replications):

ANOVA Table for Factors and Interactions

The next portion of the All Analysis Factor worksheet is the ANOVA table for the factors and interactions.  The output for this example is shown below.  The significant effects are those with a p-value ≤ 0.05.  A p-value is in red if it is less than 0.05.  If the p-value is between 0.05 and 0.20, the p-value is in blue.  This effect may or may not be significant.  It is border-line and probably should be considered for inclusion in the model.  In the example, A, C and AC are significant.  This agrees with the result from the design table.

The columns in the ANOVA table are:

Source: the source of variation which includes the factors and interactions in the model as well as the error and the total

SS: sum of squares for each source of variation

The error degrees of freed (dfError) is the given by:

The mean square for a source is the variance associated with that source and is determined by dividing the source sum of squares by the degrees of freedom for that source:

F: value from the F distribution

p-Value: the probability value that is associated with the F Value for a source of variation

% Cont: the % of the total sum of squares the source of variation accounts for

Smaller p-values will generate larger % contribution. % Cont = SS/SSTotal where SS is the sum of squares for a given source of variation.

ANOVA Table for the Model

The model’s ANOVA table is listed next on the All Factors Analysis worksheet.  The output for this example is shown below.

Average: the average of the experimental runs

Standard deviation: the square root of the mean square error

Coefficient of variation: the error expressed as a % of the average, 100(Average/Standard Deviation)

R Squared: measures the proportion of the total variability measured explained by the model

Adjusted R Squared: the value of R squared adjusted for the size of the model (the number of factors in the model)

PRESS: Predicted Error Sum of Squares is a measure of how well the model will predict new values and is given below where ei is the ith residual and hii is the diagonal element of the hat matrix (H=X(X’X)-1X’)

R Squared Prediction: indication of the predictive capability of the model; the percent of the variability the model would be expected to explain with new data

Information on the factors is listed next on the All Factors Analysis worksheet.  This information includes the factor, degrees of freedom, the standard error and 95% confidence limits.  The output for this example is shown to the below.

Factor: the intercept, factors and interactions included in the model

Coeff: the regression coefficients for the factors

Degrees of Freedom: the degrees of freedom associated with the factor (always 1 for two level designs)

Standard Error: the estimated variance of the factor which is defined as the following for n = number of replications and k = the number of factors:

95% Upper and Lower Confidence Limits: The upper and lower 95% confidence limit around the coefficient; if it contains zero, the factor is usually not significant 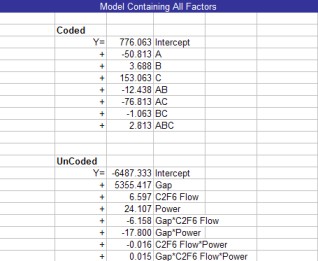