One of the many things we share in common is that we all live on this earth.  And, according to the data, this earth of ours is getting warmer.  This month (December 2015), almost 200 countries approved a climate accord that seeks to dramatically reduce emissions of greenhouse gases.  These gasses are blamed by many for the increase in global temperatures that we have seen.

There are many climate models that are used to predict global temperatures in the future.  These are, I am sure, very complex mathematical representations of the many interactions between the forces about our earth – oceans, land, atmosphere, our sun, etc.  You don’t know how a model will perform in the future.  So, scientists test the model to see how well it predicts the past.

That is the problem with data.  It is all historical.  Using historical data to predict the future of a complex variable like global temperatures is not easy.  But like all analysis, it should begin by looking at the data over time.

This publication demonstrates how a control chart can be used to identify different periods of homogeneity in a set of data – periods of consistency and predictably.  And from this consistency comes the ability to predict for the future.

So, instead of using all those fancy global warming models, we will use a simple control chart to predict the average global temperatures for 2015 and 2016.

The data used in this analysis covers the time period from 1880 through 2015 and was downloaded from the Goddard Institute for Space Studies (GISS) website at this link.  GISS is part of the National Aeronautics and Space Administration (NASA).  You can also download the data in an Excel workbook by selecting this link.   The data includes monthly and annual data.  Only the annual data are used in this publication.  The data for 2015 contains the months of January through November.

(Update note 1/24/2016: Please note that the data used below are based on the meteorological station data, which is called the dTs  data.  There is also the LOTI (land ocean temperature index).  According to the website, the LOTI "provides a more realistic representation of the global mean trends than dTs below; it slightly underestimates warming or cooling trends, since the much larger heat capacity of water compared to air causes a slower and diminished reaction to changes; dTs on the other hand overestimates trends, since it disregards most of the dampening effects of the oceans that cover about two thirds of the earth's surface.")

The data from 1880 to 2015 were first analyzed using a simple run chart – just plotting the data (in degrees Celsius) over time to see what it looks like.   This chart is shown in Figure 1. 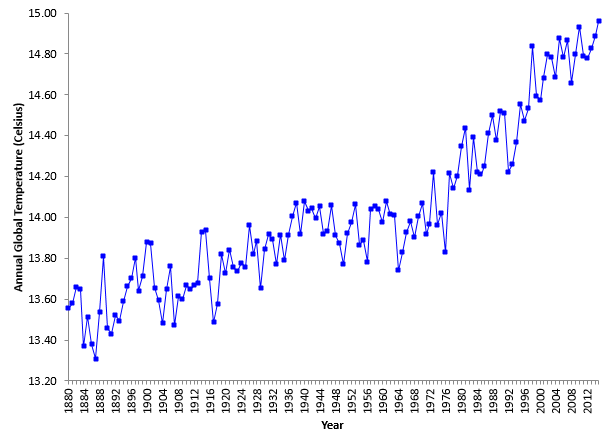 Well, it is easy to see that the annual global temperature is definitely increasing over time.   In fact, it looks like 2015 - the last point on the chart - will be the warmest year since 1880.  Remember, the 2015 temperature in the run chart is based on the first 11 months of the year.

What else do you see in the chart?  It does look like there are several fairly “level” global temperature periods – times when the global temperature was not increasing.    We will use those “level” periods of times to build a control chart that shows a movie of global warming over time.  This will help us find periods of homogeneity that can be used to predict the future. 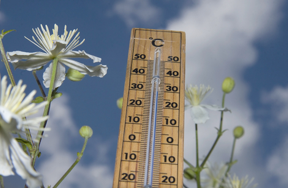 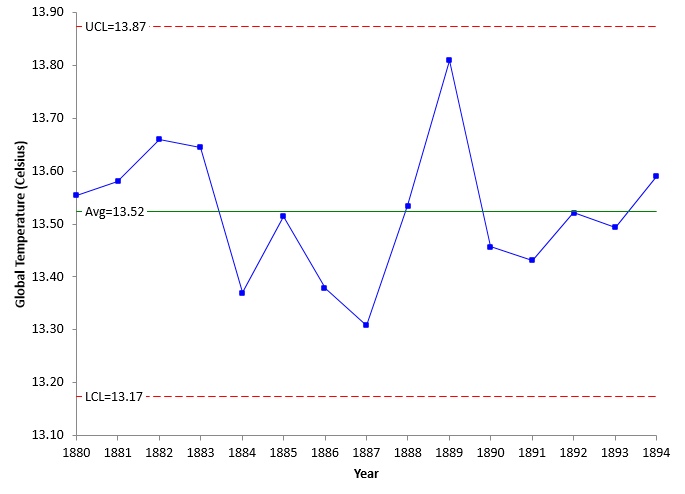 The control chart is Figure 2 is in statistical control.  There are no points beyond the control limits and no patterns - such as a run above the average - within the control limits.  So, this was a period where the global temperature was not increasing but staying the same – averaging 13.52 °C.

The key phrase above is “as long as the process stay the same.”  But, it didn’t.  Something happened.

To help see the magnitude of the change, the control limits can be split in 1895.  This is shown in Figure 4.

Figure 4: Global Temperatures for 1880 to 1918 with Split Control Limits 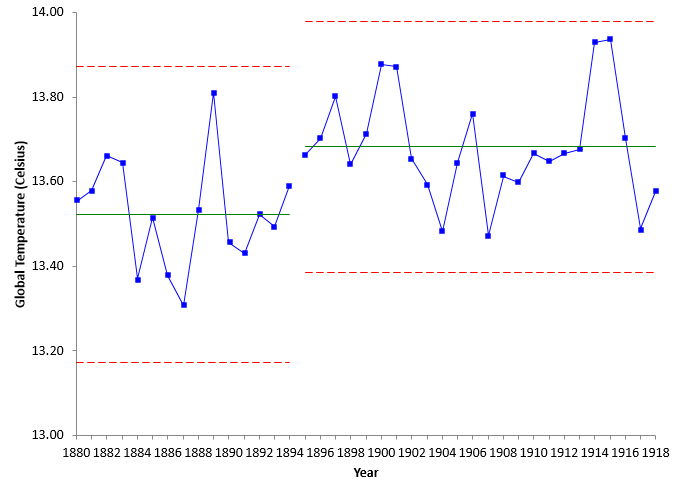 Figure 4 shows that there was step change in global temperature starting in 1895, increasing the average from 13.52 to 13.68 – an increase of 0.16 °C.  These data now represent the new norm – at least for that time period.   What caused this step change to occur?  Time for another step change.

The data from 1919 to 1935 is the next “level” period of temperature.  This time period has been added to the data using the split control limit approach and is shown in Figure 5. 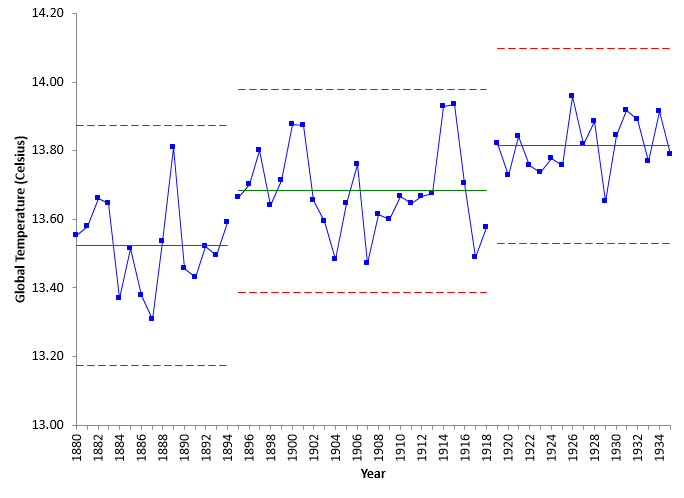 Another step change for the period of 1919 to 1935 is apparent.  The average temperature for this time period was 13.81 – an increase of 0.13 °C over the previous time period.  What caused this step change to occur?  Now for 41 years of consistent global temperature.

The 41-year period from 1936 to 1976 represents a long period where the global temperature did not increase or decrease – it just stayed the same.  This time period has been added to the control chart and is shown in Figure 6. 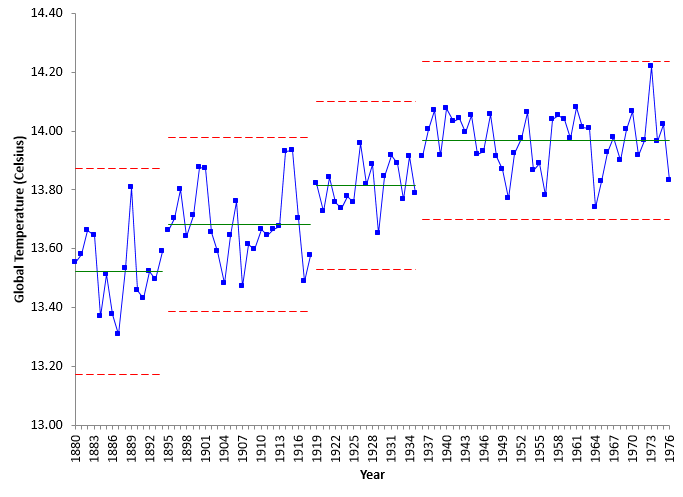 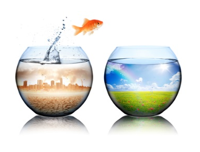 But, once again, something changes – and more dramatically - in 1977.  The “level” periods of global temperatures appear to be going away.

This 21-year period changes the way we have looked at the data so far.  Yes, there is a step-change up, but for the first time, there is an indication that the temperature is not level during this time period but increasing.  The data from 1977 to 1997 have been added to the control chart as shown in Figure 7. 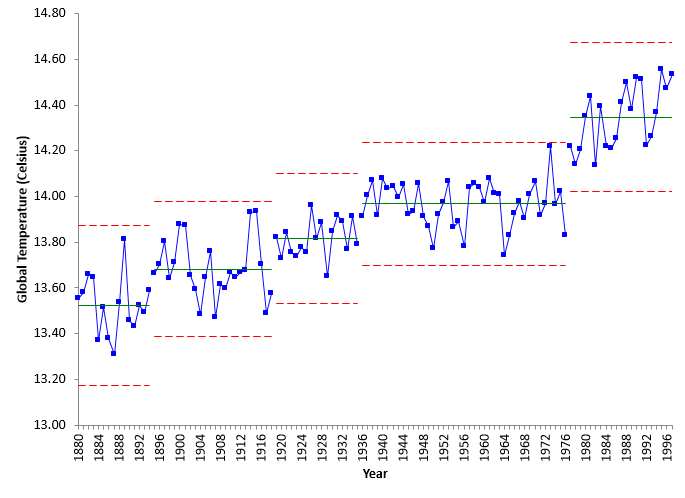 But look closely at the data plotted from 1977 to 1997.  Most of the data starting in 1997 are below the average for the time period while most at the end of the time period are above the average.  This is an indication that the temperature is increasing.   If you do a regression analysis on the 1977 to 1997 data, you will find that there is a significant correlation between the year and the global temperature.  The p value is less an 0.05 – which implies there is statistically significant relationship between the global temperature and the year number.  The ANOVA table for this regression is shown in the table below.

The model (best-fit equation for the data) is given by:

For the time period from 1997 to 1997, the global temperature increased an average of 0.0136 °C per year.  The slope is the coefficient for the year number.  Now for the last time period.

There appears to have been another step change in the global temperature beginning in 1998 – in addition to the average yearly increase seen from 1977 to 1997.  The time period from 1998 to 2015 has been added to the control chart as shown in Figure 8. 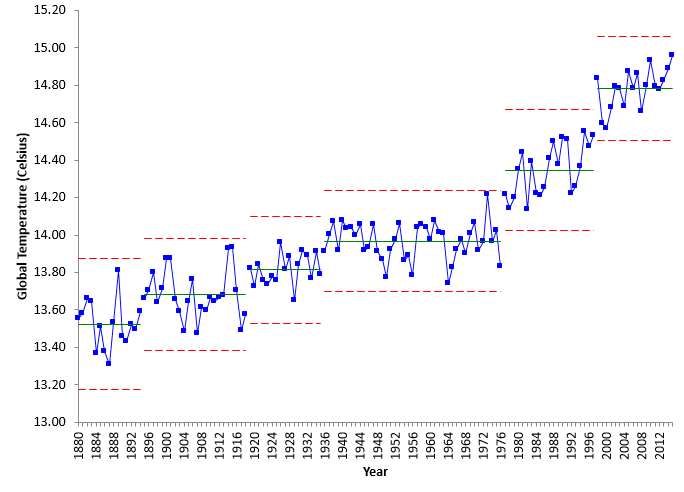 A regression analysis was performed for the global temperature versus year number for the time period from 1998 to 2014.  Note that the partial result for 2015 was not included in this regression. The ANOVA table for this regression is shown in the table below.

The p-value is 0.0303, which is less than 0.05.  So, we conclude that there is significant relationship between the year and the global temperature.

The best fit regression equation is:

If there is a significant trend in the data, a trend control chart can be used to analyze the results.  Take the last time period of 1998 to 2014.  The regression analysis shows that the global temperature is increasing each year for that time period.  Is the process in control during this time period?

Figure 9: Trend Control Chart for Global Temperatures from 1998 to 2014 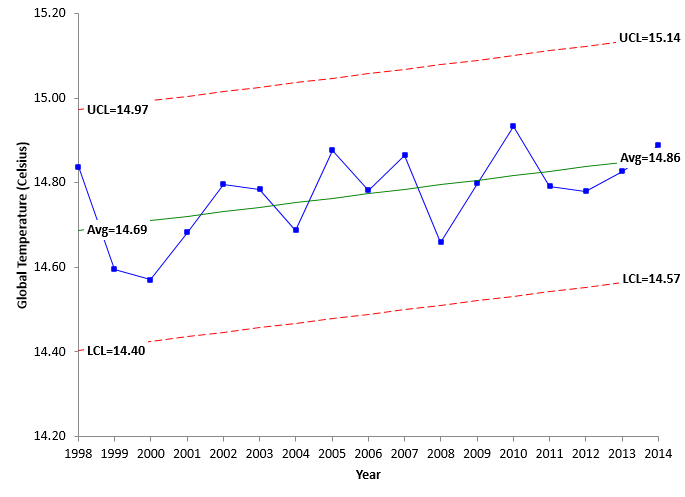 This trend control chart is in statistical control.  There are no points beyond the control limits and no patterns.  Thus the data are homogeneous and can be used to predict the future – again as long as the process stays the same.  For 2014, the value of the center line is 14.86, while UCL = 15.14 and LCL = 14.57.

The control chart in Figure 9 can be used to predict the temperature for 2015 since it is in statistical control (again as long as the process stays the same).

Using the best-fit equation, the predicted temperature for 2015 is:

It could range between the upper and lower control, which will range from 14.59 to 15.15.  The average temperature for the first 11 months of 2015 is 14.96.  So, our estimate may be a little low, but it does appear to be within the control limits.

If we use 14.96 as the final average temperature for 2015 and re-run the regression, the trend control center line equation is:

The predicted value for 2016 is then:

We will check back in a year and see how we did.

It is interesting that there have been 6 step changes over time.  What caused these step changes in average global temperatures?  What is causing the yearly increase starting in 1977?  It may well be greenhouse emissions.  Maybe the topic for a future newsletter.