It is hard to believe that another year has gone by.  We hope that you had a great year – both personally and professionally.  With this issue, we have completed 9 years of monthly newsletters.  We hope that you have enjoyed the newsletters, and that the information has been useful to you. Best wishes to you and yours in the New Year.

We end this year on a light note – SPC Jeopardy. We still teach a statistical process control course (SPC) at times.  At the end of the course, it is always good to judge how much the attendees learned.  Some people might give a test before the training and then after the training.  But, to us, that is just too serious.  After all, SPC is fun!  So, we end the course on a less-serious note with our version of Jeopardy for SPC.

Jeopardy is the game where there are five major categories, each with 5 “questions” of differing point values.  They aren’t really “questions” because in Jeopardy you see the answer – and then you put your answer in the form of a question.  For example, the answer might be “Barack Obama.”  You then form your answer in terms of a question: “Who is the president of the United States?”

This month’s newsletter explains how we use the game of Jeopardy at the end of the course. The rules are a little different than the TV version of Jeopardy. You can also download (for free) the SPC Jeopardy file that we use.  It is a PowerPoint file so you will need to have PowerPoint to use it.  All the answers and questions are there – just in case you are worried that you might need a refresher.  Also, all the questions and answers can be found in our newsletter over the years.

As always, please feel free to leave comments at the end of the newsletter.  And, once again, best wishes from us to you for the New Year!

As stated above, the SPC Jeopardy game came into being because we wanted a fun way to see how well participants learned the material we covered.  At the same time, we wanted it to be non-threatening and done in a team environment.  We had seen Jeopardy used on-line for a few school courses and thought that this would be a great way of accomplishing our objective.  PowerPoint with a few hyperlinks provided an easy method of putting together the game.

How to Play SPC Jeopardy

To get started, we tell the attendees that we are going to “test” their knowledge of SPC.  But, to make them more comfortable, we will do this in a team environment.  Then we divide the class into teams of three to five people.   Four is the best number.   The easiest way to do this is to divide the number of attendees by four.  Suppose there are 22 people in the class.  22 divided by 4 is 5 with a couple left over.  So, you would ask the class to number off from 1 to 5.  Teams 1 and 2 would have five people each; teams 3 – 5 would have four each.  Appoint a leader for each team.

Each team then gets together.  Chairs are needed because they will be working together for a while.  It takes about 40 to 60 minutes to complete SPC Jeopardy.  The teams are separated as much as possible so there is a minimum chance of a team’s discussion being overheard by other teams.  Each team is given paper and a pen.

At this point, we start the PowerPoint presentation in the Slide Show format.  The first slide comes up as shown below. 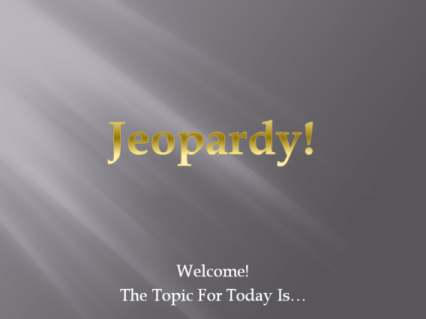 And the topic for today is (on the next slide): 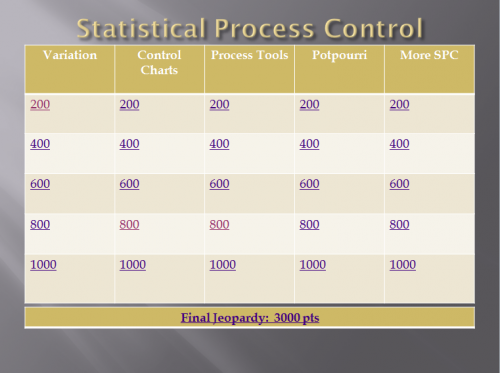 The five categories are Variation, Control Charts, Process Tools, Potpourri and More SPC.  Of course, you are free to change this as well as change the answers and questions in the file you download.

That is not quite the way we do it.  Team number one goes first.   The leader selects a topic and amount.  For example, suppose the leader selects Variation for 200.  You then select the 200 under the Variation category.  The following appears in the presentation: 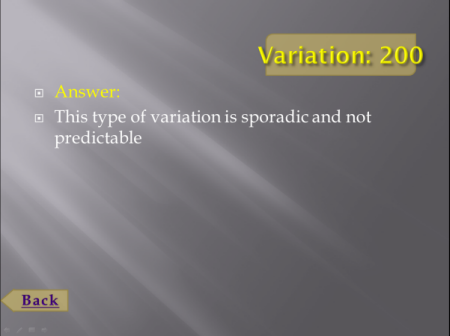 Each team is given 30 second to write down the question that goes with this answer.  It must be written in the form of a question on their paper.  After 30 seconds, ask each team to give its question starting with team number 1.  Allow all teams to give their question.  After all teams have given their questions, hit the “enter” key once to show “Question” and again to show the question: 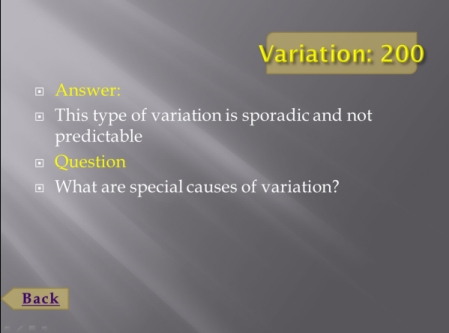 Then Team 2 picks the next category and point amount.  This process continues until all the categories and amounts have been used.

There are two hidden Daily Doubles on the board.  If a team selects one of these, the following screen will appear: 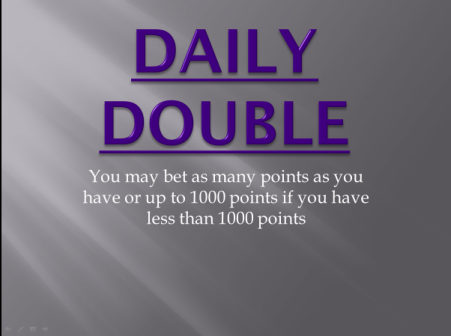 Each team may bet as many points as they have or up to 1000 points if they have less than 1000 points.  Ask each team to decide how many points they want to bet and write it down on their pad of paper.  Look at each pad to be sure that the points are recorded.  Then select the “Daily Double” on the slide.  This will take you to the answer and the process is the same as before – except the teams win or lose the number of points they chose to bet for the Daily Double.

The team with the most points wins the game.  If you want, you can have a prize for the first place team.

You can download the SPC Jeopardy PowerPoint file here.  This file should work with versions of PowerPoint from 2003 through 2010.  If you have any problems, please let us know.  You are free to edit or change this file in any way you want.  We hope you find it useful.  You don’t have to use it for just SPC – you can use it for anything you are teaching or just for fun!

Ending on a light note for the year - SPC Jeopardy.  Happy New Year!