A surgical facility is tracking the number of times a certain infection occurs after surgery each month. These do not happen very often so they are considered "rare" events. The facility's quality assurance group has data for the last two years. The monthly data is shown in the table below.

The first step the group must do is to decide how to track the data.

Use a c Control Chart?

The QA group developed a c control chart based on the data in the table. The resulting chart is shown below.

Figure 1: c Chart for Number of Infections per Month 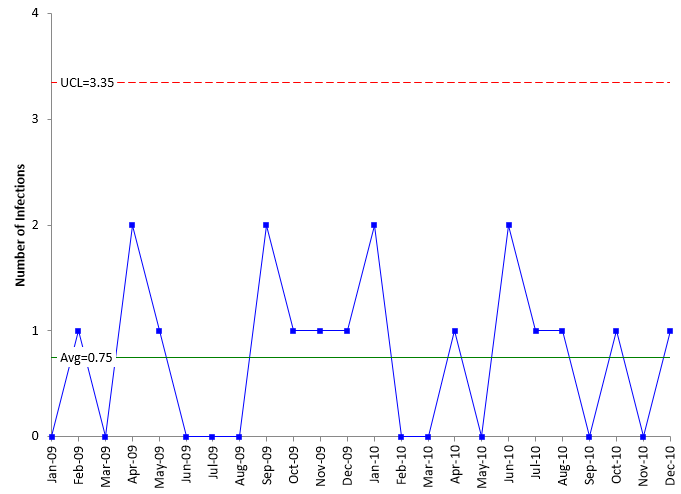 The average number of infections per month is 0.75; the upper control limit is 3.35. Take a hard look at this chart. Is it very useful? If you make a change to the process that you hope will reduce the number of infections, how will you know from the chart that an improvement has occurred? You would need to wait for the control chart to signal an improvement has been made. You would need a run below the average - seven months in a row with no infections. Not a really useful chart when you think about it.

where  c is the average infections per month.  These are not really the appropriate control limits in this case.  This is actually the small sample case for the c control chart. If you use the approach outlined in our March 2008 newsletter, the upper control limit is equal to 5. Either way, this c control chart is not that useful.

There are different methods of calculating the centerline and the control limits. One common method, based on a geometric distribution, is to use the following equations: 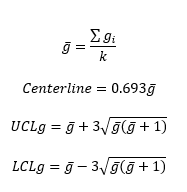 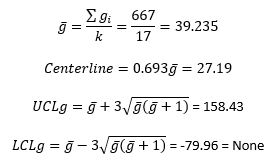 If the LCLg is below zero, the lower control limit can be set to 0 or to "None." The g control chart with these calculations is shown in Figure 2. 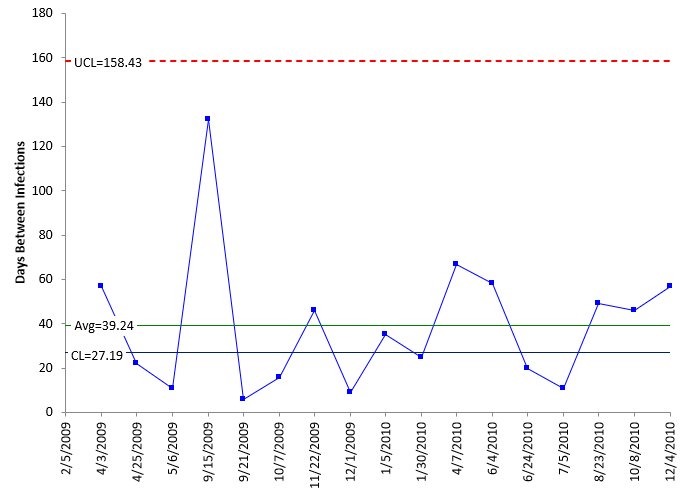 This chart is in statistical control.  There are no points beyond the UCL and no patterns.

Another method for the g control chart calculations is to use a probability approach. In this approach, you start by calculating the value of p, which is an event probability.

This value is used to calculate the centerline and the control limits. The probability-based equations are: 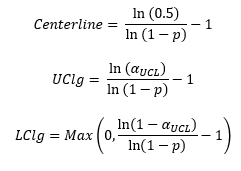 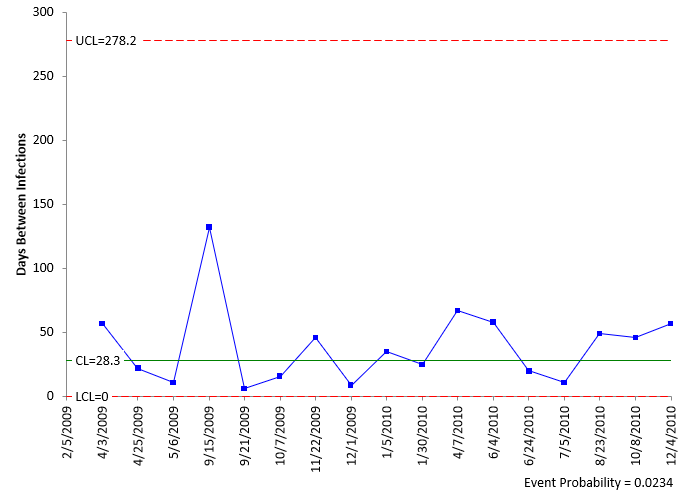 All the points on this chart are within the control limits and there are no patterns.  The "process" is in statistical control.

You can see that the g control chart gives you a much better picture of what is happening in the infection process than the c control chart. You obviously want a point to be above the upper control limit. So, if you can go 158 (by the first g chart) days or more, you have significantly reduced the frequency of infections. A run of 7 or more in a row trending up is also an indication that the process is improving, as is 8 points in a row above the centerline.