Analysis of Variance (ANOVA) and the Variability Chart

Just like most techniques, it takes some thought to determine how to design the experiment and how to interpret the results. There are different types of ANOVA designs: crossed, nested and mixed. Designs can have different types of factors – fixed or random – or a mixture of the two. The analysis method changes depending on the type of design and factors that you have. Misclassify and you may draw the wrong conclusions.

The SPC for Excel software was used to analyze the results in this publication. This software includes ANOVA for up to 5 factors as well as the variability chart.

ANOVA is a statistical technique that determines if the means of two or more treatment combinations are the same. It is basically used to analyze the results of a properly planned experiment to find out if certain factors impact a response variable.

The null hypothesis in an ANOVA is that all treatment means are the same. If µi is the mean for one treatment combination out of k treatment cominbations, then:

One of the simplest types of ANOVA involves only two factors. This is the example that we will use in this publication. It is from Design and Analysis of Experiments, 6th Edition by Douglas Montgomery.
In this example an engineer is designing a battery that will be subjected to some large variations in temperature. The engineer wants to test three different materials to be used for the plate. He has no control over the temperature in the field but can control them in the laboratory. He selected three temperatures that represent the range of temperatures that the battery will see in the field (15, 70 and 125 °F). So, the engineer has selected the factors to include in the design (two factors: temperature and material) and the levels for each factor (material: 1, 2 and 3; temperature: 17, 70, 125). The factors are the independent variables in this experiment. The response variable is battery life – the dependent variable in this experiment.

The next thing the engineer must decide is how many times he wants to replicate each treatment combination. The replications are used to determine the "normal" variation in the process. This "normal" variation is used to determine if any of the treatment means are significantly different, as you will see below. The engineer decides to replicate each treatment combination 4 times. The experimental runs are conducted in a random order.

The results from the experiment are shown in Table 1. 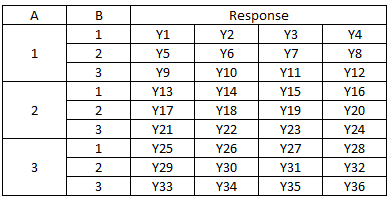 The first treatment is for A = 1 and B = 1. The four replications are given as Y1, Y2, Y3 and Y4. It is easy to see that every level of A is associated with each level of B during the experiment. 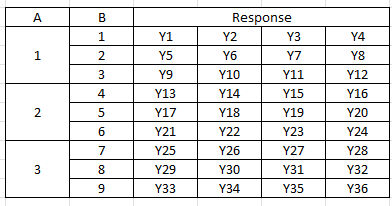 Here is an example of a nested design. You have three suppliers for a raw material you use in your process. You want to see if there is a difference in purity of the raw material they send you. The suppliers are Factor A in this case. For each supplier, you select 3 batches. This is Factor B. You select four samples from each batch. This is the design shown in Table 3.

Just to complicate things a little bit, you can have a mixed design where you have both fixed and nested combined. An example is shown in Table 4 for Factor A with three levels, Factor B with two levels, and Factor C with 12 levels. 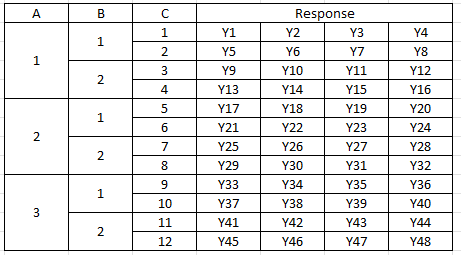 Factors in ANOVA are either fixed or random. And it does make a big difference because the analysis is will change depending on the type of factors. A fixed factor is controlled. In our example, there are three temperature levels. These are controlled. You only care about the results from these temperatures. You are not trying to say anything about all the other temperatures.

Fixed factors and random factors require a different type of analysis. If you misclassify a factor, you can generate incorrect results.

The ANOVA table for battery life is shown below in Table 5. This is a crossed design with fixed factors.

The second column is the Sum of Squares (SS). The SS is a measure of the variation that is attributed to each source of variation. The calculations for this example are shown below. These calculations assume that this is a crossed design with fixed factors, where a = number of levels of factor A, b = number of levels for factor B and n = the number of replications. Also, the value of Ai is the sum of the results when A is at level i. Bj and ABij are found similarly. The "Within" source is often called "Error." 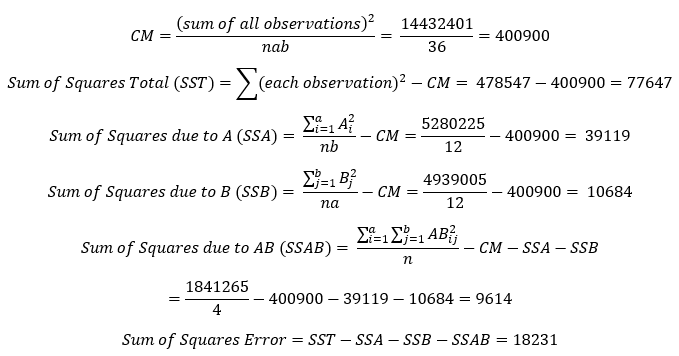 The fourth column contains the mean square values for the various sources of variation. These are obtained by dividing the sum of squares for each source by the degrees of freedom for each source. The treatment mean squares (e.g., A, B and AB) represent the variation between sample means. The mean square error (MSE) is obtained by dividing the "within" sum of squares by the "within" degrees of freedom. The MSE represents the variation within the samples.

The F values are shown in the fifth column.

In this example, the p value for temperature, material and the interaction of temperature*material is less than 0.05. All are statistically significant and impact battery life.

If you would like to see the calculations for one factor ANOVA, please see our SPC Knowledge Base article One Factor ANOVA.

The variability chart for the battery life experiment is shown in Figure 1. 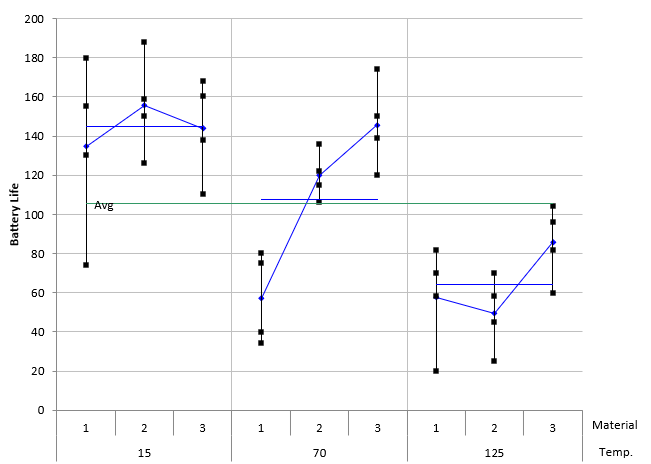 It appears that a temperature of 15 and material type 3 (across all temperatures) gives the best result for battery life.

You can switch the factors on the x-axis to make it easier to see different factors. Figure 2 shows the variability chart with the results grouped by material.

Figure 2: Variability Chart with the Results Grouped by Material 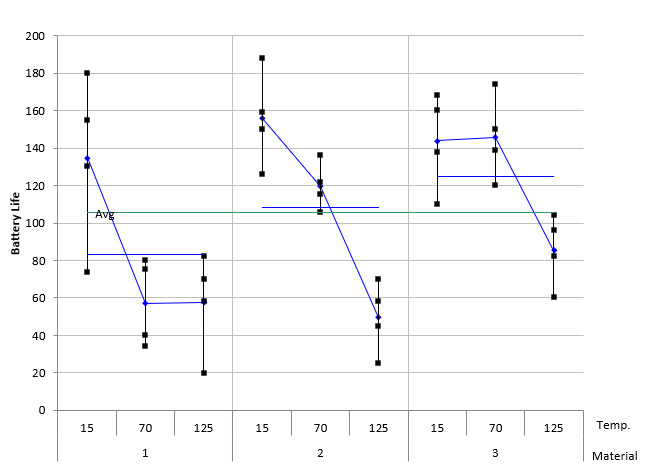 The conclusions are still the same, it is just sometimes easier to see the results by looking at the different views the variability chart gives you.

This publication examined the Analysis of Variance (ANOVA) to determine what factors and/or interactions significantly impact a response variable. The variability chart was used to determine what the factor levels should be to give the optimized response variable. An example using a crossed design and fixed factors was used to demonstrate this. Designs can be crossed, nested or a mix of the two. Factors used in a design can be fixed, random or a combination of the two.