As 2008 draws to an end, we want to wish you and yours the best in the coming year. 2008 has been a turbulent year for many on the economic front - the credit fiasco, the housing market burst, layoffs, bailouts - just to name a few. We hope you have been spared the effects of these. Hopefully we will see a turnaround in 2009.

This newsletter also marks a change for us. This is number 60 for us - five years of providing monthly newsletters. Over this time, we have presented a variety of topics related to process improvement through the use of SPC (statistical process control). These topics have included variation, many types of control charts, Pareto diagrams, histograms, scatter diagrams, a problem solving methodology and much more.

We are now expanding the scope of our newsletters to include more statistical topics that are commonly used in process improvement efforts. These topics, for example, will include hypothesis testing, experimental design, ANOVA, nonparametric testing and chi-square tests among others. These topics reflect the expansion of statistical techniques in the new version of our SPC for Excel software. While we will retain the name SPC for Excel, the new techniques are designed to meet the needs of anyone involved in statistical data analysis, particularly those who use Six Sigma as their methodology for improvement. To start this process, we will introduce a commonly used statistical tool: Analysis of Variance. Once again, best wishes in the New Year!

We will use an example from the excellent book Design and Analysis of Experiments, 6th Edition, by Douglas C. Montgomery. The example involves a plasma etching process. An engineer wants to determine if there is a relationship between the power setting and the etch rate. She is using four different power settings (160W, 180W, 200W and 220W). The engineer tested five wafers at each power level. The data from the experiment are shown below.

The experiments were run in random order. The four power settings are the column headings. The results for each of the five wafers from each setting are below the headings. For example, when the power setting was 160, the five etch rates obtained were 575, 542, 530, 539 and 570.

The ANOVA table has the following basic form.

The second column in the table contains the sum of squares. These are calculated variances as shown below.

The third column is the degrees of freedom. The number of levels is given by a. N is the total number of experimental runs.

We will now determine the sum of squares for each source of variation.

The sum of squares calculations for the three sources in the ANOVA table are shown below. The information in the table below is helpful for the calculations.

The total sum of squares is given by the following:

The treatment sum of squares is given by the following:

Filling in the ANOVA Table

The rest of the ANOVA table can now be filled in. The ANOVA output from the software is shown below for this example.

Most software packages (including ours) give a p value associated with the F value. This is the probability of obtaining the calculated F value (66.80) if there were in fact no difference between the treatment levels. If p is less than 0.05, we usually conclude that there is a significant difference. In this example, p is less than 0.0001.

Which Treatment Means are Different

The ANOVA table simply tells you that the treatment levels are significantly different. It doesn't tell you which ones are significantly different. More analysis is needed for this. One method is to create a scatter diagram. This chart from the software is shown below. The results are plotted versus power level. You can easily see that the etch rate increases as the power level increases. 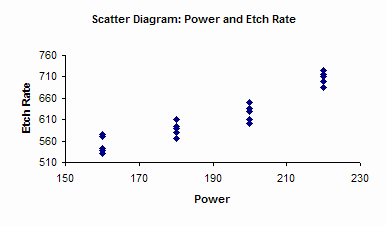 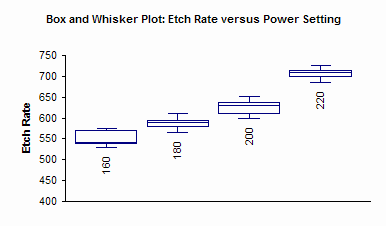 Additional analysis that can be done includes developing confidence intervals for each pair of treatment means as well as applying the Fisher's LSD method, Tukey's Method or Bonferroni's method for determining if significant differences exist between treatment means. You can also apply Bartlett's or Levene's test for equality of variances. These techniques are in the new version of the software. Next month's newsletter will examine one of the three methods for determining which treatment means are significantly different from others.

This month we introduced the single factor ANOVA.  This type of analysis is designed to determine if levels of a single factor impact a response variable.  The ANOVA table was developed along with the calculations required.  The scatter diagram and Box-Whisker plot were used to graphically show which levels could be different.  Next month, we will look at a mathematical way to determine which levels are significantly different.