Like all control charts, a CUSUM control is a method of looking at your process variation.  A CUSUM control chart monitors the deviations of individual samples results (X values) or subgroup averages (X values) from a target value.  The target value is the same as your process aim – where you want the process to operate.  The cumulative sum is the sum of these deviations over time.

To use a CUSUM control chart, you have to answer two basic questions.

1. What shift from the target do you want to be able to detect?

This shift is usually ½ or 1 standard deviation of the parameter being plotted.  Thus, the data helps you set the shift to detect.  This shift is often referred to as the “allowable slack” in the process.

2. Where do you want the action limits set?

It is clear you will need a method of estimating the standard deviation of the process.  This is covered below.

You are producing a chemical that contains a small amount of component Y that is important in the use of the chemical.    In addition, you know that the optimum concentration for that component is 0.16 wt. %.  You want to control the manufacturing process as close to that as possible.  You take a sample every batch.  The results for the last 25 batches are shown below.

Since our batch data represents one data point at a time, an individuals control chart (X-mR) can be used to monitor the results.  This is the most common way the data would be analyzed.  But remember, the purpose of a Shewhart control chart is primarily to keep the process in control and to see the impact of process improvement efforts.  With a CUSUM control chart, you are trying to detect small shifts away from the process target. 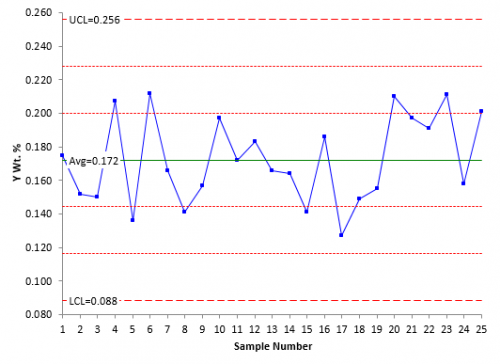 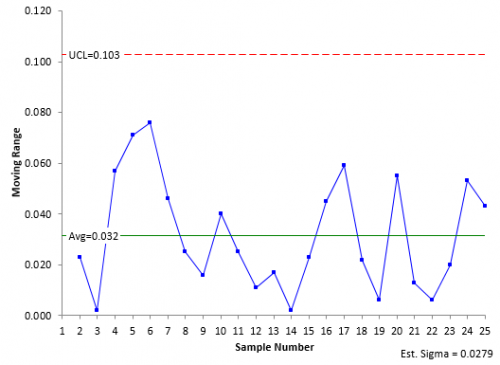 The X chart is in statistical control.  There are no points beyond the limits and there are no issues with the zone tests or run tests.   The process average is 0.172.  This is different from the process target of 0.166.  But not by much.  Is it significantly different?  The individual results can vary between the lower control (LCL) of 0.088 and the upper control limit (0.256).  The process is consistent and predictable.

Note that 5 out of the last 6 points are above average.  Is this a problem?  Under the classical control chart approach, it is not a problem.  There is not enough evidence of you to assume that a special cause of variation exists and spend time looking for that special cause.  For more information on interpreting control charts, please see our April 2004 publication.

The next step is to determine the allowable slack (k).  It is common to set this value at ½ to 1 standard deviation.  We will use ½.   So,

The next step is to determine the action limits (H).  These are usually set as +/- 4 sigma. So,

The next step is to calculate the cumulative sums on the high side (SH, above the target) and on the low side (SL, below the target).  We know that our target is 0.16.   The following are the definitions for SH and SL.

Take a look at the equation for SH(i).  It contains:

So, if Xi > (Target + k), then the ith sample result is outside the allowable slack range on the high side.

So, if Xi < (Target – k), then the ith sample result is outside the allowable slack range on the low side.  Figure 3 shows this.

Figure 3: On or Off Target 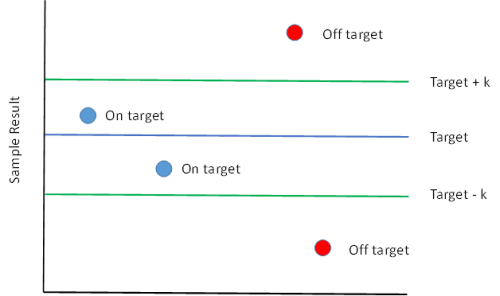 The first sample result is 0.175.  Note that this result is above our aim of 0.16.  If it is far enough away, then it should add to the high side value of SH.

The second sample result is 0.152.  Note that this result is below our aim.  It if is far enough away, then it should add to the low side value of SL.

Table 2 shows the results of the calculations for all 25 samples.   Note that both SH and SL return to zero several times.

Remember that our action limits are +/- 0.1116.  This value is exceeded by SH(23), our 23rd sample.  This tells us that the process has moved significantly off target and needs to be adjusted to return the process to the target value.

You could simply use this tabular form for the cumulative sum.  However, it is better to chart the results.  Figure 4 is a plot of the CUSUM chart. 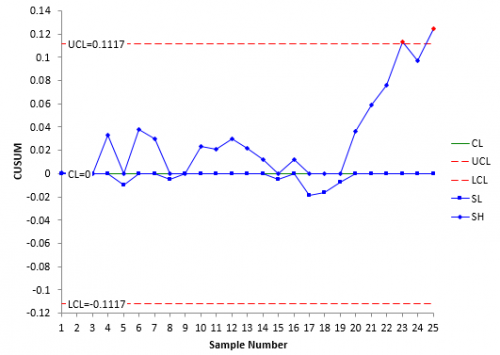 The center line on the CUSUM chart is zero.  Both the SH and SL values are plotted.  You can see how the cumulative sums on the high side begin to pile up around sample 20 and continue until the action limit is exceeded.

Once the process has been adjusted back to target, the values of SH and SL are set back to zero.  However, there is technique called Fast Initial Response (FIR) in which the values are not set back to zero, but are set to certain value, usually 2 standard deviations.  This provides a method of responding faster to off-target operations.  You can also start a CUSUM chart with a FIR.  Figure 5 shows that results where the FIR method is used to initialize the chart. 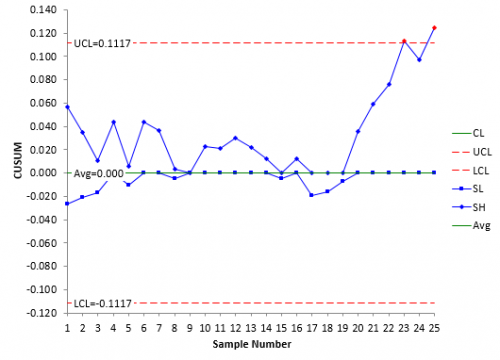 You can see from this chart that both SH and SL are further away from 0 than in Figure 4.  If the process is off target, then the CUSUM control chart will pick it up faster.  If it is on target, the CUSUM values will trend back to zero as shown in the middle of the chart.

If the action limit on the low size is exceeded, you find the current process average using:

Note that there are other control schemes for the CUSUM control chart.  These schemes are based on the ARL – the average run length.  ARL is the average number of samples required before an out of control situation occurs.  To minimize the number of false out of control points, the ARL should be large when the process is operating on target.  It should be small if the process average has shifted off target.  Different values of k and H create different ARL.  Using k = 0.5 and H = 4 provides a CUSUM control chart that has good ARL for a shift in process average of one standard deviation.  For more information, please see “Introduction to Statistical Quality Control” by Douglas C. Montgomery.  You can also search online for “CUSUM ARL” to find more information.   The ARL is based on a point beyond the action or control limits.

This publication has introduced the one-sided CUSUM control chart.  This type of control chart monitors the cumulative sum of deviations from the process target.  It is designed to detect small shifts in the process average from the target value.  It is called “one-sided” because there is a cumulative sum on the high side (above the target) and a cumulative sum on the low side (below the target).  You can adjust the CUSUM ability to detect shifts by changing the values of k (the allowable slack) and H (the action limits).  This type of chart will detect the process shift much quicker than waiting for a point beyond the control limits for the individuals control chart.  However, applying the zones tests to the individuals control chart improves its ability to detect those small shifts.