The classical X-R control chart is designed to look at two types of variation:

Suppose you are making a product. At the start of each hour, you collect five samples from the production line and measure a quality characteristic, X. This is your subgroup. You take those five measurement results and calculate a range. The range is the maximum value - minimum value. It is a measure of the variation in the individual results. You plot those range values on the R chart - which monitors the variation within a subgroup. You also calculate the subgroup average - the average of the five measurement results. You plot the average on the X chart - which monitors the variation between subgroup averages.

The X with the two lines above ("X double bar") is the overall average; Rbar is the average range and A2 is control chart constant that depends on subgroup size.  The control limits for the R chart are given below.

Consider the following example. You are running a batch reactor. Each batch takes about four hours to run. You measure the purity of the batch four times in the last hour to ensure that it has stabilized. You want to monitor the results using an X-R chart. The data you have collected for the first 10 batches are given the table below.  X1, X2, X3 and X4 are the four samples you pull from the batch in the last hour.

The subgroup averages (X) and range (R) have been included in the table as well. You then plot the X  values on the X chart and the range values on the R chart. Then you calculate the overall averages and control limits using the equations given above for the X-R chart. A summary of the calculations are given below. 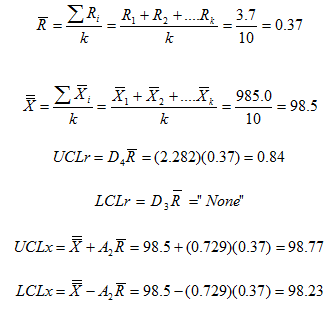 The resulting control charts are shown below. 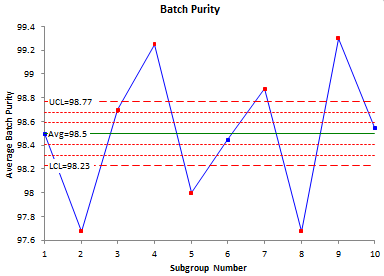 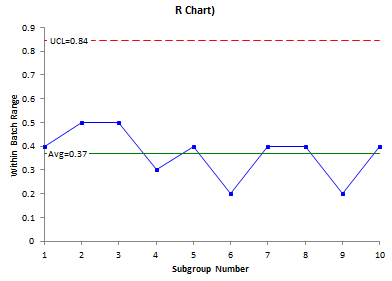 The range chart looks great. It is in statistical control. But the X chart looks terrible - almost everything is out of control. It is easy to see what happened in this example. Look at the data. There is very little variation within a batch - an average range of 0.37. Now look at the batch averages. They vary a lot more. And since you use the average range in the calculation of the control limits for the X chart, the control limits are very tight and everything looks like it is out of control. Plus, it is not reasonable to expect the within-subgroup variation to be consistent with the between-subgroup variation because of the process. So how do you handle this case?

There are really three sources of variation you want to monitor in this situation. One is the within-subgroup (batch) variation. This is given by the range chart above. So, we will keep that one. The issue is the X chart. It doesn't help tell us anything about the process. To make it useful, we will exchange the X chart for two charts. We will use the individuals chart (X-mR), but in this case, the individual values are really the subgroup averages. The mR chart will be the moving range between the subgroup averages.

The calculations for the X-mR based on subgroup averages are shown below. Please see our newsletter for more information on individuals control charts. 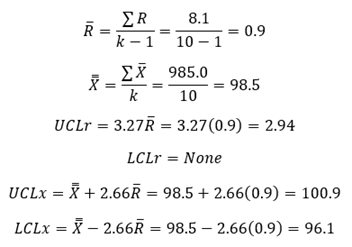 Note that the average range now used in the control chart equations is 0.9 compared with the 0.37 used in the classical X-R calculations.

The X chart is shown below.  Its control limits are based on the individuals control chart using each subgroup average as an individual value. 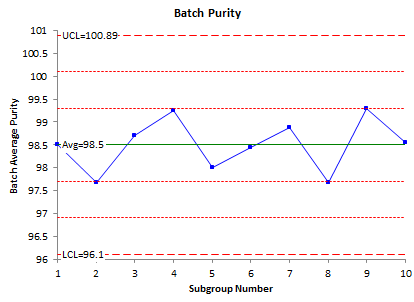 The moving range chart is shown below.  This chart plots the moving range between subgroup averages.  The average range on this chart was used to calculate the control limits on the batch averages above. 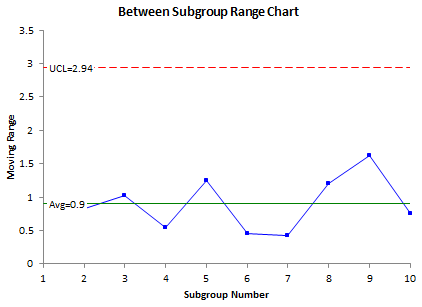 The third chart is the within-subgroup range chart.  This is the same as the range chart shown before. 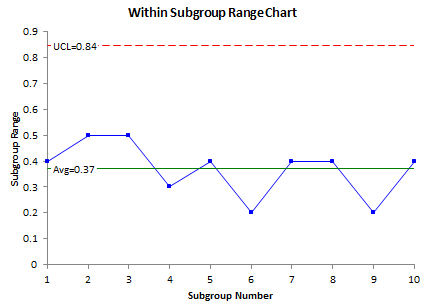 This newsletter has examined how to handle the situation when the within-subgroup variation is naturally different from the between-subgroup variation.   In this case, the classical X-R chart gives an X chart where most of the points are out of statistical control.  The approach described in this newsletter uses three control charts to handle the problem: an X chart where the subgroup averages are treated as individual values and the limits are based on the moving range between the subgroup averages; the between subgroup range chart which is that moving range between the subgroup averages; and the within-subgroup range chart, which is the normal range chart for the X-R chart.