The most common control chart for years has been the  X-R chart. This control chart uses the range to measure the variation within a subgroup. For the measurements within a subgroup, the range is the maximum - minimum value. The range is an easy concept to understand - and to calculate. This was important when the control chart calculations had to be done by hand or with a calculator. But with computer software, this is no longer an issue. One problem with the  X-R chart is that the range becomes a poorer and poorer measure of within-subgroup variation as the subgroup size increases. A different method is needed for the larger subgroup sizes. This is where the  X-s chart provides the solution. This month's newsletter introduces the  X-s chart.

In the past, there has been reluctance to use the  X-s chart in place of the  X-R chart. The standard deviation is just not as easy to understand as the range. Plus, there was the calculation issue. 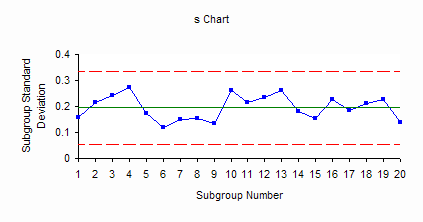 When to Use  X-s Control Charts

X-s charts are used to analyze a process operating over time. Like all control charts, they will send a signal when a special cause of variation is present. You can use  X-s charts for any subgroup size greater than 1. This means they can be used in place of  X-s charts all the time. But, you definitely should use the  X-s charts when the subgroup size is 10 or more. The standard deviation gives a better estimate of the variation in large subgroups than the range does.

In situations where either the  X-s chart or the  X-R chart can be used (small subgroups), the choice is one of convenience more than anything. The control charts will generally look very much alike and you will reach the same conclusions.

The Steps in Constructing an  X-s Control Chart

Select the subgroup size (n). Typical subgroup sizes for an  X-s chart are 10 or more. However, you can use the  X-s chart with any size subgroup of two or more. The concept of rational subgroup should be considered. The objective is to minimize the amount of variation within a subgroup. This helps you "see" the variation in the averages chart easier.

Select the frequency with which the data will be collected. This will be part of the rational subgrouping. Time is always important in taking data and in interpreting the data. Data should be collected in the order in which they are generated (in most cases).

Select the number of subgroups (k) to be collected before control limits are calculated. You can start a control chart with only 5 subgroups. You will need to recalculate the averages and control limits for each new subgroup until you have at least twenty subgroups of data.

For each subgroup, calculate the subgroup standard deviation:

Plot the subgroup standard deviations (s) on the s chart and connect consecutive points with a straight line.

Plot the subgroup averages on the  X chart and connect consecutive points with a straight line.

Plot s on the s chart as a solid line and label.

Calculate the overall process average, where  X1,  X2, etc. are the subgroup averages for subgroups 1, 2, etc:

Plot the overall process average on the  X chart as a solid line and label.

Plot the control limits on the chart as dashed lines and label.

Plot the control limits on the  X chart as dashed lines and label.

4. Interpret both charts for statistical control.

If the s chart is in statistical control, the process standard deviation can be calculated as:

c4 is a control chart constant that depends on subgroup size.

Below are the control charts constants for the  X-schart for subgroup sizes up to 25.

Next month, we will continue our look at the  X-s control chart.