This month is the second publication on X-s charts. Last month we introduced the chart and provided the steps in constructing an X-s chart. This month, we will look at a detailed example of an X-s chart. The X-s chart is a type of control chart that can be used with variables data. Like most other variables control charts, it is actually two charts. One chart is for subgroup averages (X). The other chart is for subgroup standard deviations (s). These charts are a very powerful tool for monitoring variation in a process and detecting changes in either the average or the amount of variation in the process.

A process involves the filling of bags with sand. Each bag is supposed to weigh a minimum of 50 pounds. The process has an automatic method of weighing the bags. Once the bag reaches 50 pounds, the filling operation is supposed to stop. To determine how much variation there is in the bag weights, an operator takes the first four bags filled each hour and manually weighs them using a calibrated scale. The data is shown in the table below.

We want to use an X-s chart to find out if this process is consistent and predictable (in control) as well as if it is capable of producing bag weights with a minimum of 50 pounds.

The calculations needed to construct the X-s chart were covered in last month's newsletter. For practice, you can enter the data from this newsletter into Excel and see if you can get the same results as shown below. The subgroup size is 4. For the data above, the following averages and control limits can be generated.

For the X chart:

For the standard deviation chart:

X-s Charts for the Bag Weights 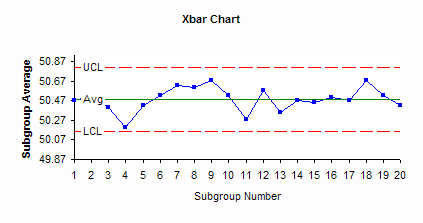 What does it mean for the X chart to be in statistical control? It means that the variation between subgroup averages is the same from subgroup to subgroup. For the bag weight example, it means that there is no statistical difference between the subgroup averages. As long as the process stays the same, we can predict the average bag weights for the four samples. The long-term average will be 50.49. The average will vary from 50.16 to 50.81.

Is the Process Capable? 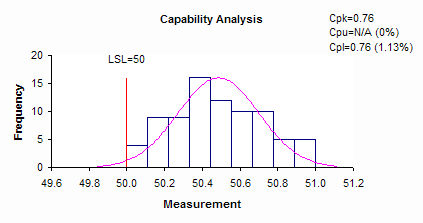 There is very little difference in the conclusions you reach if you use an X-R chart or an X-s chart. The control limits on the X chart will essentially be the same. In 2005, we had a multi-part series on X-R charts. If you look at the April 2005 newsletter, you will see the same bag weight example. The results are essentially identical.

This month’s publication continued our look at X-s charts.  A detailed example was covered.  The X-s chart was interpreted and explained.   Being in control does not mean being capable.  In this example, the processes was not capable.  The X-s and X-R charts give very similar results.