What Happened to the Complete Game?

What Happened to the Complete Game?

In 1968, Bob Gibson, a pitcher for the St. Louis Cardinals started 34 games. He finished the season with 22 wins and 9 loses, with an earned run average (ERA) of 1.12 and 13 shutouts. He had 268 strikeouts. He was one of the best pitchers ever in the major leagues.

Most amazingly, he had 28 complete games in that season – he finished 28 of the 34 games he started. Last year the National League (NL) had a total of 17 complete games while the American League (AL) had 25 complete games – both less than Gibson’s total by himself in 1968. Where did the complete game go?

The Baseball Reference website has a huge amount of data related to baseball. I used that data to track the number of complete games in the two leagues from 1950 – 2018. The chart is shown below. 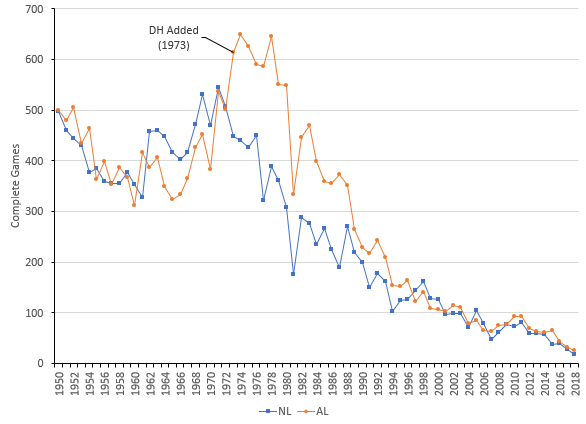 One reason for the decrease in complete games is that it appears that the age of specialization has arrived in baseball. This is particularly true for pitchers. There are starting pitchers, long -relief pitchers short-relief pitchers, right-handed pitchers, left-handed pitchers, and closers. So starting pitchers don’t have to go the complete game anymore. The chart below shows the innings pitched per starter from 1950 – 2017. 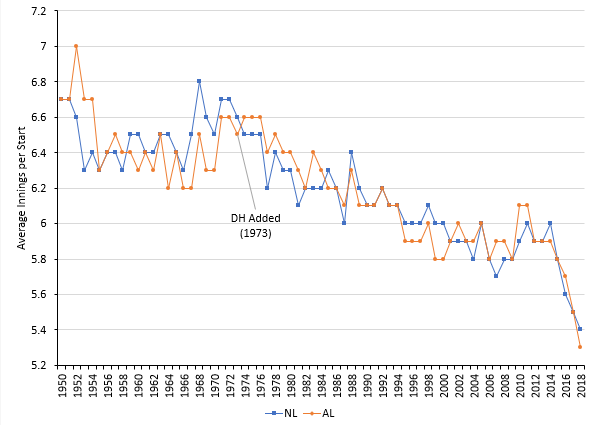 The innings pitched by the starting pitcher continues to decrease in recent years. And the number of pitcher used in each game continues to increase as shown in the chart below. 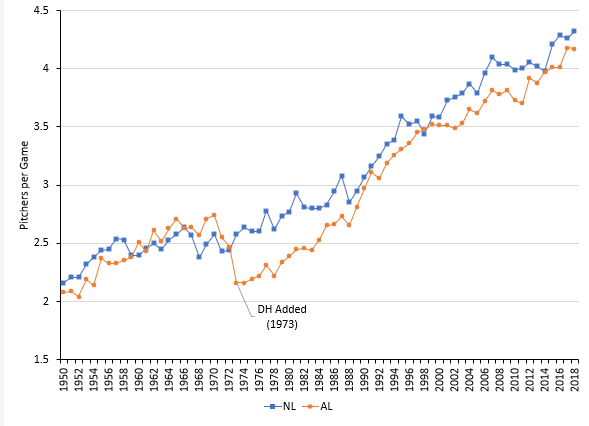 So, baseball, like all things, changes over time. It appears that the complete game is on its way to being a thing of the past with perhaps one exception: a no-hitter or a perfect game.  Justin Verlander of the Houston Astros pitched a no-hitter this past week - and a complete game!

This blog includes some updated charts from a 2018 SPC Knowledge Base publication Baseball Has Changed.