Fifty years ago, one of my baseball heroes, Bob Gibson, pitched in 34 games for the St. Louis Cardinals.  He finished with 22 wins and 9 loses.  His earned run average per game was 1.12.   Nobody has come close to that since then.   He had 268 strikeouts.

And most amazingly, Bob Gibson had 28 complete games in that 1968 season.  28 out of 34 games – he started, and he finished – no one came into relief him.   Last year the National League only had 27 complete games – less than Gibson’s total by himself in 1968.  The American League didn’t do much better.  It only had 32 complete games.  Yes, baseball has changed.

This month’s publication looks at some data from the baseball diamond, much of it comparing the NL with the AL.  Of course, that means a discussion of the designated hitter rule.    We will use the simplest of tools to determine what is happening – a run (time series) chart.  Simply plotting the data over time.  So much you can learn just from that.  But we do finish with a control chart – that gives you even more information.

Please feel free to leave a comment below.  You may also download a pdf copy of this publication here.

Baseball has lots of data.  And one website has done a great job of putting it all together:

The data used in this publication comes from this website.  It has batting, pitching and fielding stats dating back to 1876.  For our purposes though, we will just use a small portion of their data from 1950 through 2017.

In 1973, the American League adopted the Designated Hitter (DH) rule.  The National League did not.  Prior to this, the pitcher had to bat.  With the DH, the pitcher does not bat.  Instead, a person who isn’t in the game defensively bats in his place and is called the DH.  The DH was started as an experiment.  Well, 45 years later and there is still not agreement on the use of the DH.  Most likely, if your favorite team is in the American League, you like the DH.  If your favorite team is in the National League, you don’t like the DH.

So how did this come about?  Back in 1972, the American League owners wanted to do something about the game.  They felt there were not enough runs being scored and that the fans were getting bored.  So, they implemented the DH to improve the offense – more hits and more runs scored.  After all, that pitcher who can’t hit isn’t batting.  Instead a better hitter is batting.  It also meant to some that the starting pitcher could stay in the game longer since he is not batting, and the manager didn’t have to make a choice about leaving the pitcher in or pitch-hitting for him when there is the opportunity to score runs later in the game.

So, if the DH makes an impact for the AL, the starting pitcher should stay in longer, the batting averages should be higher, more runs should be scored, more homers should be hit, etc.  Time to look at some data.

Average Innings Pitched for the Starting Pitcher per Game

Figure 1 is a plot of the average innings pitched by the starting pitcher for the NL and AL. The chart shows where the DH was added.  For about 9 years, the AL average is above the NL, but it is not by a large amount.  But there is no longer a difference in looking at the later years.  It does not appear that the DH significantly impacts how long the starting pitcher stayed in any more. The NL and AL seem to track very closely. 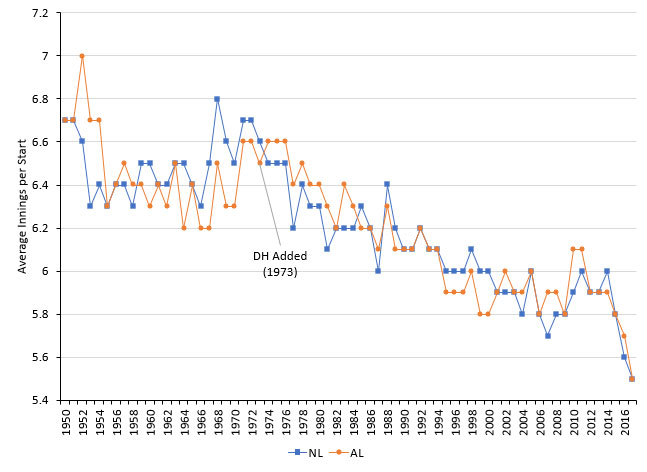 The average innings per starter is trending down though for both the NL and the AL.  Why is that?    The use of relief pitchers is expanding.  Let’s look at two other interesting charts.

Number of Pitchers Used per Game

Figure 2 shows the average number of pitchers used per game.  From 1950 to about 1958, the NL tended to use more pitchers per game than the AL.  From 1958 to 1972, the AL used more pitchers.  Then the DH was added.  You can see what happened.  The number of pitchers per game in the AL dropped significantly.  It has remained below the NL since then, except for one year, although the gap between the two leagues has become less.  Why does the starter not go more innings than the NL pitcher but the number of pitchers per game is lower for the AL?  It is probably due to the relief pitchers. In the NL, managers often have to take a relief pitcher out of a game if they have an opportunity to score runs to get the lead or back into the game. 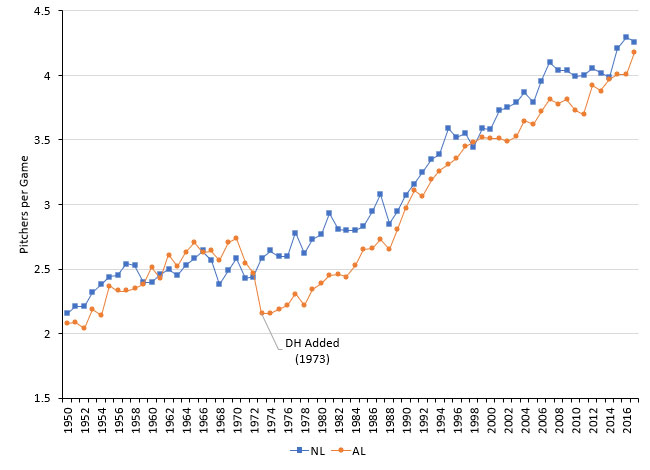 The AL manager does not have to make that choice.  So, that relief pitcher will stay in longer than he would have in the NL.

The number of pitchers used per game continues to increase in both leagues.  This is due to the relief pitcher specialization mentioned earlier.  Relief pitchers may only face one batter now and then be pulled out of the game.  Quite often managers go with the percentages: it is better to have a right-handed pitcher pitch to a left-handed batter.  So, relief pitchers are being used more and more.  And that is causing the demise of the complete game. 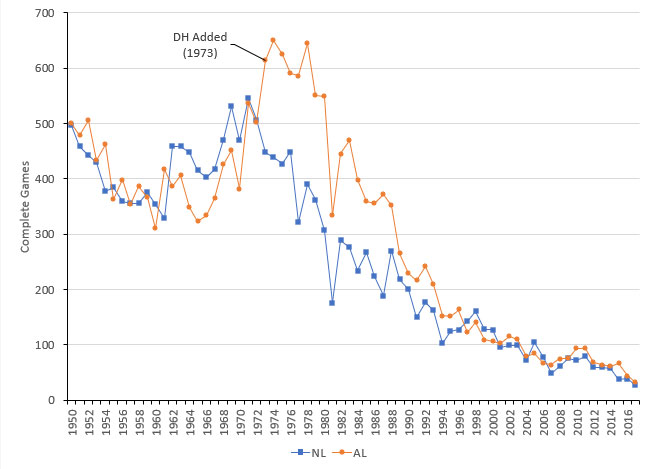 But there has been a steady decline in the number of complete games as the role of the relief pitcher developed over time.  There were very few complete games last year.  There may come a time when the only complete games are the no-hitters. But the demise of the complete game is very apparent from the chart. 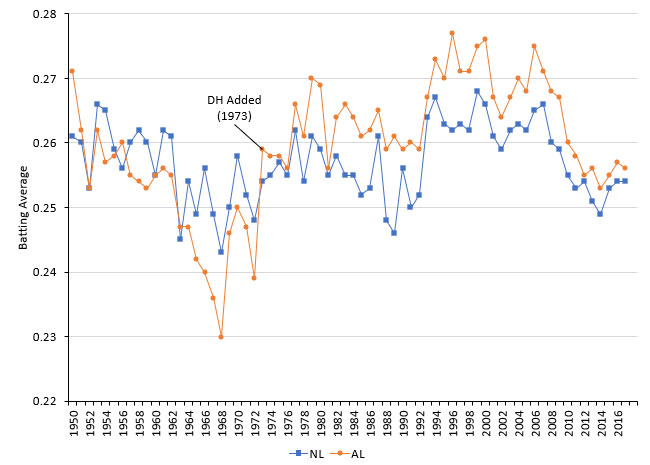 What about home runs?  One would expect more home runs in the AL than the NL when the DH was added.  Figure 5 is a plot of home runs per year for the two leagues.  It appears that the DH did not have a huge impact on home runs for the AL.  There was an increase from 1972 to 1973 – which people probably attributed to the DH.  But the number of home runs is in line with what happened several years before that. 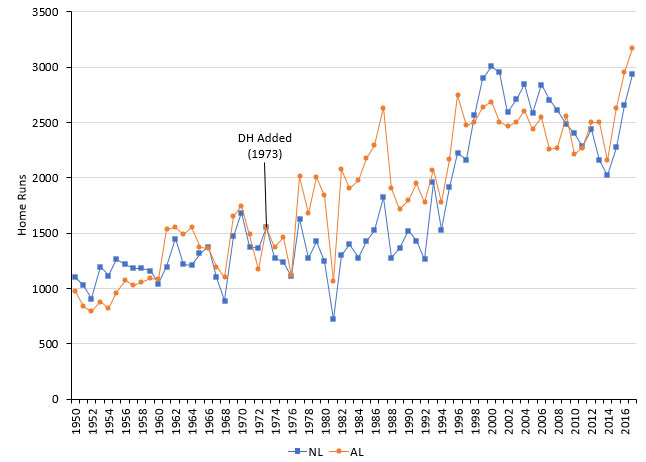 Figure 6: Home Runs per Year in the AL 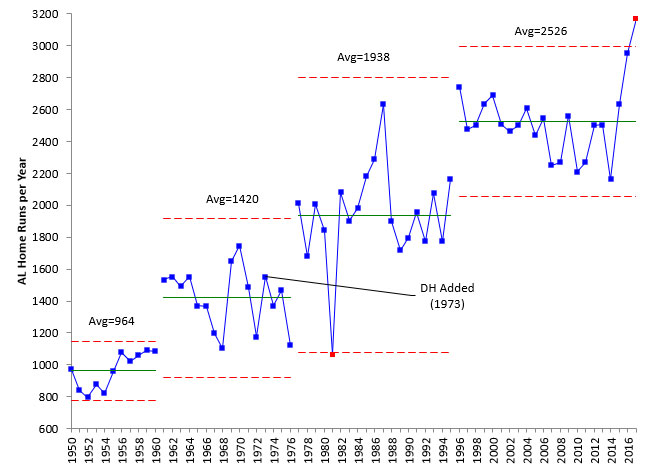 There is another step change upward in 1977.  Again, I don’t know why but it is clear on the chart.  This step change lasted until 1995.  The average number of home runs was 1938 during this time.  There is an out of control point in 1981.  That year was below the lower control limit for home runs.  The reason?  There was a players’ strike that year that shortened the season.  Yes, control charts do show you what has changed.

The last step change occurred in 1996, again for unknown reasons.   Maybe the baseball has changed?  There have been several studies on why the home runs have increased. The average number of home runs during that time is 2526.  Note the last point for 2017.  It is out of control.  Could it be the start of another step change?  Time will tell.

This month’s publication looked at how simple run charts can show a lot about what a process is doing.  In this case, the processes revolved around baseball.  It showed how the changes in relief pitching is slowly doing away with the complete game in baseball as well as the impact that the DH has had on baseball.  A control chart was used to show how the step changes in home runs per year in the AL can be identified.