(Note: all the previous publications in the attribute control charts category are listed on the right-hand side.  Select "Return to Categories" to go to the page with all publications sorted by category.  Select this link for information on the SPC for Excel software)

Please feel free to leave a comment at the end of this publication.   You can download a pdf copy at this link.

Attributes charts are often used to monitor data that are counts. This includes yes/no type data - such as the product is within spec or not. It also includes counting-type data - such as the number of customer returns. These attribute charts are based on certain assumptions, which have been covered in a previous publication: Attribute Control Charts Review. These assumptions include assumptions about the underlying distribution (binomial and Poisson) and the average of the distribution is the same over time.

In 2002, David B. Laney published an article in Quality Engineering that described a new approach to handle the situations when the assumptions are not true, particularly when the sample size is very large.

The classical approach to monitoring these types of data over time is with a p control chart. This type of chart monitors yes/no data – either the member called or did not. Each month, you count the number of members (n) and the number who called in (np). You then calculate the % who called in for the month as number who called in/total number of members. This is the p value. It is plotted each month. After enough months, the average and control limits are calculated and added to the chart. Figure 1 shows the p control chart based on the data in Table 1.

Figure 1: p Control Chart for % of Patients Communicating by Phone 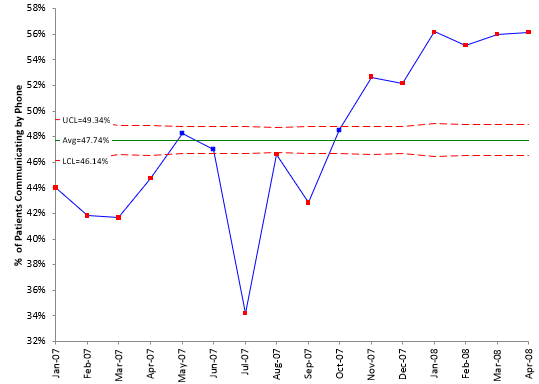 One reason this occurs is the large subgroup size. The control limits, based on this assumption of a binomial distribution, are given by:

where UCLpi and LCLpi are the upper and lower control limits for point i and p is given by:

When faced with this issue in the past, the easiest thing has been to treat the data as individuals values and use an individuals chart to analyze the data. The individuals control chart for the data is shown in Figure 2 (the X chart only, not the moving range chart).

Figure 2: X Chart for % of Patients Communicating by Phone 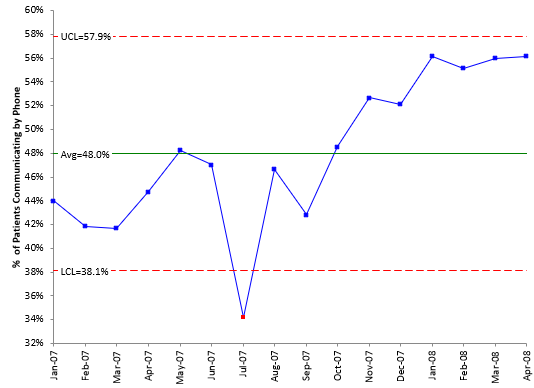 More information on individual control charts, including the control limit equations, can be found in our publication, Individuals Control Charts.

The Laney p’ chart is produced by combining z values with the individuals control chart. It begins with calculating a z value for each point. A z value tells you the number of sample standard deviations between the point and the average. The z value for point i is given by:

p is the average shown in the p control chart (0.4774). The denominator is the standard deviation for point i. Note that denominator under the square root size has the sample size for point i. For the first point, calculations are:

The next step is to calculate the moving range of z between consecutive points.

The results of the calculations are given in the table below (small differences due to rounding).

The next step is to calculate the average range. The average of the moving range values in the table is 10.4108. The standard deviation of the z values is given by the following:

For example, the UCLp’ for the first point is given by:

The control limits calculations for all the points are shown in Table 2.

Figure 3 Laney p’ Chart for % of Patients Communicating by Phone 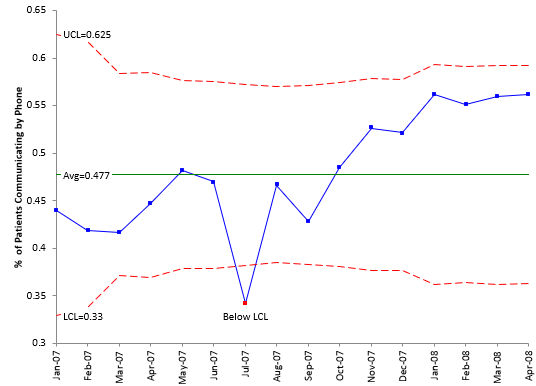 “It is the relative amount of process variation not explained by the binomial assumption alone. As n increases, the variation due to sampling diminishes, thus making the batch-to-batch component relatively larger. That is why applications with large subgroups reveal this situation very often.”

This Laney p’ control chart looks very similar to the X control chart, except for the varying control limits. The X chart does not have the ability to address situations where the subgroup size varies – and loses the information contained in the variation. The Laney p’ chart is simply an extension of the X chart that allows it to handle the varying subgroup sizes as well as large subgroups sizes. This can also be extended to the u control chart.

The last is a better method of analyzing your basic Gage R&R study where multiple operators test multiple parts multiple times. Version 6 produces detailed reports or overview reports. You can download an example of the detailed EMP Basic Study report at this link.

New items in Version 6 include:

Plus, you get the new builds for version 6 at no cost.  These new builds continually improve the software with new and enhanced techniques.  Find out more information on version 6 at this link.