Customers today not only expect a quality product, but they also expect quality in items associated with the product. This includes answering the phone when a customer calls, resolving a customer issue on the first phone call, correct invoicing and on-time shipments, just to name a few. These types of "attributes" are not easily measured in most cases. How can we monitor these types of situations over time? Attributes control charts can be used with this type of data.

These types of data, which are based on counts, are often called attributes data. There are two types of attributes data: yes/no and counting type data. With yes/no type data, you are examining distinct items (such as invoices, deliveries, or phone calls). With counting type data, you are usually examining an area where a defect has an opportunity to occur. Both types of data are explained below.

Counting Data: With counting data, you count the number of defects. A defect occurs when something does not meet a preset specification. It does not mean that the item itself is defective. For example, a television set can have a scratched cabinet (a defect) but still work properly. When looking at counting data, you end up with whole numbers such as 0, 1, 2, 3; you can't have half of a count.

If you don't have data based on counts, you have variables data. Variables data are taken from a continuum and are often referred to as continuous. Variables data can, theoretically, be measured to any precision you like. Examples of variables data include time, length, width, density, dollars, and height.

So, there are four different attributes control controls. With this newsletter, we will now have covered all four types. The links are given below.

A product or service is defective if it fails, in some respect, to conform to specifications or a standard. For example, customers like invoices to be correct. If you charge them too much, you will definitely hear about it and it will take longer to get paid. If you charge them too little, you may never hear about it. As an organization, it is important that your invoices be correct. Suppose you have decided that an invoice is defective if it has the wrong item or wrong price on it. You could then take a random sample of invoices (e.g., 100 per week) and check each invoice to see if it is defective. You could then use an np control chart to monitor the process.

The red bead experiment described in last month's newsletter is an example of yes/no data that can be tracked using an np control chart. In this experiment, each worker is given a sampling device that can sample 50 beads from a bowl containing white and red beads. The objective is to get all white beads. In this case, a bead is "in-spec" if it is white. It is "out of spec" if it is red. So, we have yes/no data - only two possible outcomes. In addition, the subgroup size is the same each time, so we can use an np control chart.

Data from one red bead experiment are shown below.The numbers represent the number of red beads each person received in each sample of 50 beads.

The np control chart from this data is shown below. 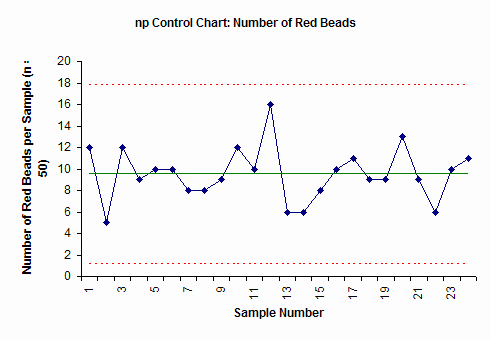 The np control chart plots the number of defects (red beads) in each subgroup (sample number) of 50. The center line is the average. The upper dotted line is the upper control. The lower dotted line is the lower control limit. As long as all the points are inside the control limits and there are no patterns to the points, the process is in statistical control. We know what it will produce in the future. While we don't know the exact number of red beads a person will draw the next time, we know it will be between about 2 and 17 (the control limits) and average about 10.

The steps in constructing the np chart are given below. The data from above is used to demonstrate the calculations.

In the red bead example, the subgroup size is 50.

b. Select the frequency with which the data will be collected. Data should be collected in the order in which it is generated.

c. Select the number of subgroups (k) to be collected before control limits are calculated. You can start a control chart with as few as five to six points but you should recalculate the average and control limits until you have about 20 subgroups.

d. Inspect each item in the subgroup and record the item as either defective or non-defective. If an item has several defects, it is still counted as one defective item.

e. Determine np for each subgroup.

a. Select the scales for the control chart.

b. Plot the values of np for each subgroup on the control chart.

In the red bead example, each of the six workers had 4 samples. So, k = 24. The total number of red beads (summing all the data in the table above) is 229. Thus, the average number of defective items (red beads) in each sample is 9.54.

b. Draw the process average number defective on the control chart as a solid line and label.

4. Interpret the chart for statistical control.

a. The following tests for statistical control are valid.

The red bead control chart (shown above) is in statistical control. All the points are between the control limits and there are no patterns. Remember that the upper control limit represents the largest number we would expect if only common cause of variation is present. The lower control limit represents the smallest number we would expect. As long as the process stays the same, we can predict what will happen in the future. Each person will have between 2 and 17 red beads in the sample. This won't change until we fundamentally change the process.

Suppose you are tracking the number of invoices with errors on a weekly basis. You have developed an operational definition of what constitutes an error on the invoice. You have decided there are five possible reasons: wrong item, wrong price, wrong person, wrong address, or wrong payment terms. You collect data for 20 weeks. The control chart for the twenty weeks is shown below. 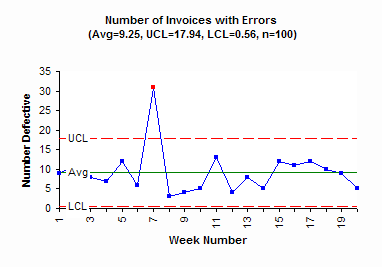 This chart has one out-of-control point. In week 7, there was an unusually high number of invoices with errors. The special cause should be found and eliminated. Then efforts at reducing the common causes of variation can begin. But to improve you must know what errors occur most frequently. This is where you can construct a Pareto diagram on the reasons for invoice errors. The Pareto diagram for this example is shown below. 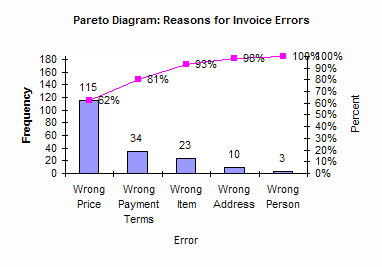 It is easy to see from this Pareto diagram that the number one reason for invoice errors is the wrong price. Working on reducing pricing errors will significantly improve the process. For more information on Pareto diagrams, click here.

When using an np control chart (or any attributes control chart), always track the reasons defects occur or an item is defective. This allows you to construct a Pareto diagram on reasons and bring focus to your process improvement efforts.