Just Plot the Data - It is So Simple!

We hear a lot about government spending these days – not just in the United States but in just about every country around the world.  Here in the United States, our two political parties snap at each other every single day.   The Republicans say that President Obama and the Democrats spend way too much money and we are too far in debt.  And the Republicans say they gave in to raising taxes so that door is closed in the future.   President Obama and the Democrats say that they have already cut spending and that the Republicans are blocking their ability to reduce the deficit by blocking tax increases on the wealthy and corporations.  And the Democrats say that the rate of spending increases has declined.  So, who is correct?  Well, it depends how you spin it, and our politicians are the pros at spinning things.

It is amazing how often people simply listen to their favorite news source and then assume what they hear is correct.  They might hear: “Spending is way up under President Obama” from a Fox News analyst.  Or they might hear:  “President Obama has cut spending” from an ABC news analyst.   Of course, this makes it easy on a person – no thinking, no checking for the facts – simply listen to what someone says or read what they wrote and assume you are getting the facts.  It takes a little work to delve into the facts.

Often though, it is quite simple.  You can learn a lot by merely plotting the data over time.  Many times, you don’t need to make a statistical control chart to see what is happening – a run chart will tell you a lot.    This month we will take a look at the United States government – how much money is spent and how large our deficit is.  We will start with a run chart and then move to analysis through a control chart.  Fun and games ahead.

Feel free to leave a comment at the end of the newsletter.

The Time Period Considered and the Data

In analyzing data, you have to make a decision about how far back to go in time.  We chose to go back to 1977, the first year Jimmy Carter was President of the United States.  Since 1977, we have had three Republican presidents (Reagan, Bush and Bush) and three Democratic presidents (Carter, Clinton and Obama).  We didn’t get into our financial problems  overnight and, the fact that both parties have been represented in the White House over the past 35 years, shows there is plenty of blame to go around.

The data included in the analysis are the yearly expenditures and the yearly deficits.  These data are available from the White House web at the time this was written.  Since the population has been increasing in the United States over time, we also decided to look at government spending per capita.  The data for the United States population came from this link.  The data are shown in the table below – along with who was president at the time.  The outlays per capita are given in $ per person, while receipts, outlays, deficit and population columns represent millions.

It is usually a little difficult to tell what is happening just from a table of numbers.  But if you look at the column called “Outlays”, a fancy name for spending our tax dollars, you can easily see that it has increased a lot over the past 35 years. It is still worth just charting the outlays over time to easily see the magnitude of the change over that time.  This is done in Figure 1. 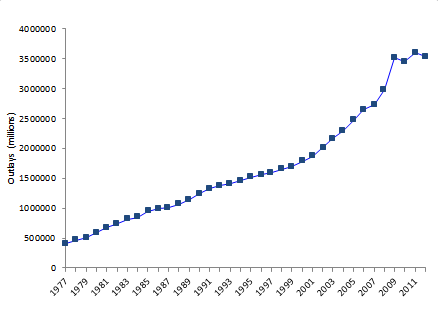 Wow - a large increase over time, from about 400 billion in 1977 to 3.5 trillion in 2012.  No doubt about it -  government spending has been increasing over the years.  That is kind of expected since we have had inflation and more people for the government to handle.  We will ignore inflation but will take a quick look at population growth. 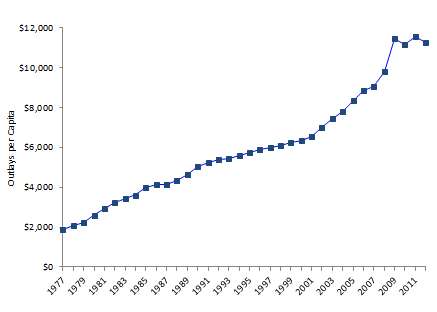 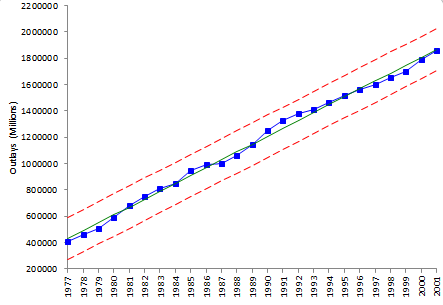 This chart is in statistical control.  It says that, on average, the outlays have increased by 59,789 million (or about 60 billion) per year since 1977.  This is the slope of the best fit line.  And since the chart is in statistical control, we can expect that trend to continue as long as the process stays the same.  However, the process changed as we will see below.

The chart shows that spending increased through each president’s term during this time period.  This includes President Reagan, who was known for pushing for smaller government.  The fact is that government spending did increase under his presidency from 1981 to 1988.  But it has increased for all presidents since 1977 (and before that as well).   Now let’s take a look at what happened after 2001.

Figure 4 shows a control chart based on the data from 1977 through 2008.  The control chart shows a break in the year 2002.  This is because the process changed with the 9/11 attack in 2001.  The government increased spending on anti-terrorist measures and on the two wars in Iraq and Afghanistan.

The time period from 2002 through 2008 shows increased spending.  The best fit line for that time period is:

This now brings us to the Obama years.  The run chart in Figure 1 shows the jump in spending that occurred in 2009 when Obama took office.   Or course, the Democrats blame Bush for this saying his fiscal policies caused the banking and housing crisis of 2008.  The Republicans blame it on the Democrats and their inability to address the housing issue and the large increases in spending on the social programs.  Probably Bush and Obama can share the responsibility for this spending increase.

But the chart also shows something else – four years in a row that spending appears to have leveled off – something that had not happened in the previous 30 plus years.  Figure 5 shows the control chart with this third stage added. 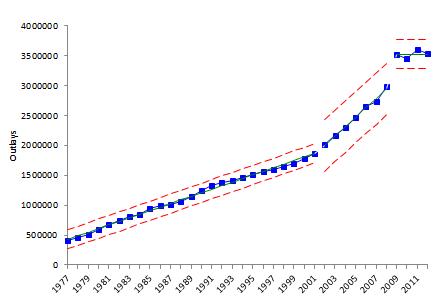 So, what can you say about government spending.  Under all presidents since 1977, government spending has increased (giving Obama partial credit for the spending increase in 2009), but since 2009, spending has leveled off - we aren't spending more - but we sure are spending at the highest level in the history of this country.  Spending went down slightly in 2010 and 2012 and up some in 2013 – but that appears to be normal variation now.

So did the deficit soar as government spending increased from 1977 to 2012?  Let’s take look.
Figure 6 shows the deficit over this time period. 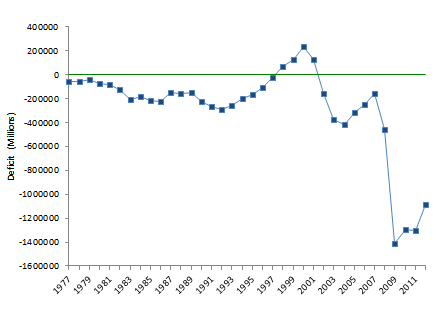 The run chart shows that there has been a deficit for all but the time frame from 1998 to 2001 (the Clinton years as the Democrats like to remind people).  Starting in 1991, there was a nice upward trend in deficit reduction (started in the Bush years, continuing through the Clinton years).  Then the deficit increased after 9/11 and then had a sharp increase with the banking and housing problems of 2008 and beyond.

The chart helps see the magnitude of the change in deficit - a real and scary problem for the United States and for many countries around the world.  Just about everyone knows you can't sustain a system where more goes out than comes in over the long run.   It would be nice if our politicians worked together to solve the problem and not just blame the other side and hope to make it to the next election cycle.  And that goes for politicians in both parties!  But just plotting the data over time shows the magnitude of the change - helping one see the true changes in the process.  Most of us have a hard time with billions of dollars, let alone trillions.

You can learn a lot by simply plotting data over time – you don’t always need to do a control chart.  Just seeing how the data arises over time will give you a much deeper insight into the underlying process than if you just looked at a table of numbers – or worse, relied on some news organization to tell you what the data means when they seldom know how to look at data and draw rational conclusions.  A picture is worth a thousand words.  Just plot the data - it is so simple!

An ending quote often attributed to another Illinois Senator of 50 years ago, Everett Dirksen:

"A billion here, a billion there, pretty soon, you're talking real money."