This is the first of a multi-part newsletter on rational subgrouping – a very important, yet often forgotten, part of statistical process control (SPC).  Far too often, people do not give enough (or any) thought about how to subgroup their data when constructing an  X-R control chart or any other control chart that involves putting the data into subgroups.  One needs to remember that control charts are really a study of the variation in your process.  And the variation displayed on the control chart depends on how you subgroup your data – which may or may not be the variation you would like to study.  We will use the sport of golf to help us explore rational subgrouping in this newsletter.

As always, please feel free to leave a comment at the end of the newsletter.

Golf is a great game – at least some folks think so.  Imagine that you are a pro golfer – getting to fly around the world to beautiful golf courses throughout the year and compete for million dollar purses in golf tournaments.  Golf tournaments consist of four rounds of 18 holes of golf played over four days.  So, suppose you are a golf pro – like Phil Mickelson.  You want to monitor whether your golf score is getting better.  How could you do this?

One method would be to track your average tournament score, i.e., the average of the four rounds.  You would like to see this score get lower since lower scores improve your ability to earn money in the pros.  You would also probably be interested in your consistency, i.e., how close the four rounds in a tournament are.  You won’t like a lot of variation your results – shooting a 72 one day and a 90 the next.  So, you could also track the range in your golf scores for a tournament.  The perfect chart to do this is the  X-R control chart.

You can continue this for each tournament you are in and plot the results on an X control chart.  This chart  shows you have much variation there is in your average tournament score from tournament to tournament – this is the variation between subgroups and is sometimes called the long-term variation.

You are pretty consistent!  You can continue this for each tournament you are in and plot the results on the R chart.  This chart shows you how much variation there is in your scores within a tournament from tournament to tournament – this is the variation within a subgroup and is sometimes called the short-term variation.

The R chart is examining the variation within the subgroup over time and will let you know if this within subgroup variation is consistent over time.  If you are new to control charts, please review our newsletter on the purpose of control charts. 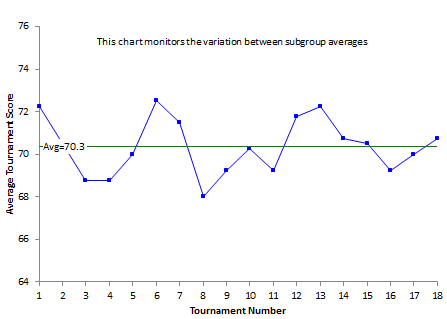 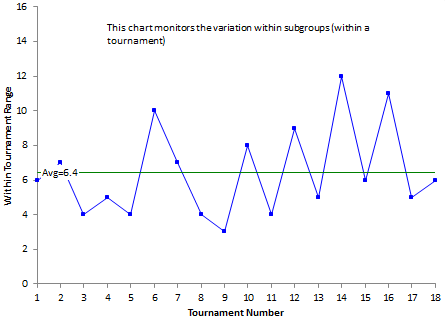 Whenever you look at a control chart, the first question you should ask yourself is

“What variation is this chart examining?”

“The  X control chart is monitoring the variation in the subgroup averages from subgroup to subgroup.”

Figure 2 is measuring the variation within the four rounds in a single tournament from tournament to tournament.  You are plotting this range (the maximum minus the minimum value) over time.  In control chart language:

“The R chart is monitoring the variation within the subgroup from subgroup to subgroup.”

where D4, D3, and A2, are control chart constants that depend on subgroup size (see our newsletter on  X-R control charts).  Our subgroup size in this case is 4, since there are four rounds per tournament.   R is the average on the range chart and

is the average of the X control chart. 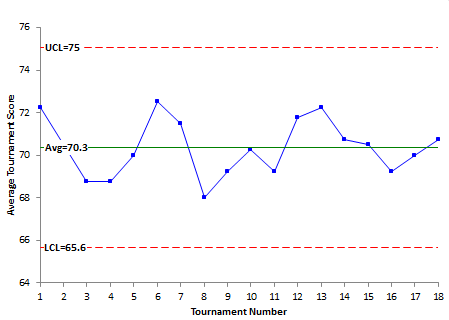 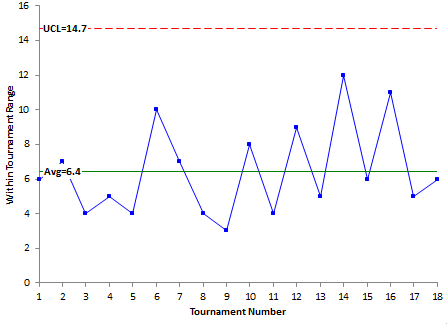 As long as there are no points beyond the control limits and no patterns, the X control chart is in statistical control.  This is the case as seen in Figure 3.  This means that the variation in the subgroup averages (tournament averages) is consistent over time.  The process is consistent and predictable.  It means that we can predict what will happen in the future.  We don’t know what the next tournament average will be, but we do know that it will be between 65.61 and 75.04 with a long term average of 70.32 as long as the process stays the same.  It also tells us that our golf score is not getting lower over time.

Figure 4 is the range chart with the control limits added.  Remember that this chart is monitoring the variation in the range of scores from a single tournament.  The average range (6.47) is the centerline on the chart.   The upper control limit (14.77) is also plotted.  In this example, there is no lower control limit.   Since there are no points beyond the control limits or patterns, the R chart is in statistical control.  This means that we can predict what will happen in the future.  We don’t know the exact range of scores that will occur in the next tournament, but we do know that it will vary between 0 and 14 with a long term average of 6.47 as long as the process stays the same.

Once a process is in statistical control, the only way to improve it is to fundamentally change the process.  If we want our average score to decrease or to be more consistent, we have to change the way we do things.  Fundamental changes could include a different golf coach, a new swing, or new clubs.

Table 2 shows his PGA tournament rounds for those tournaments where he made the cut from 2010 through 2012. He did not miss the cut on too many tournaments.  The data are from www.espn.com.

Figures 5 and 6 show the X and R control charts with the control limits based on the 2010 data.  Still a pretty consistent golfer!  Note that in Figure 6, there is a run of 8 points below the average.  Something happened to make his game more consistent from that point on.  We should probably re-calculate the control limits from that point on.  But I will leave that to Phil.  Or, if you would like to do it, e-mail me and I will send you the data in an Excel workbook. 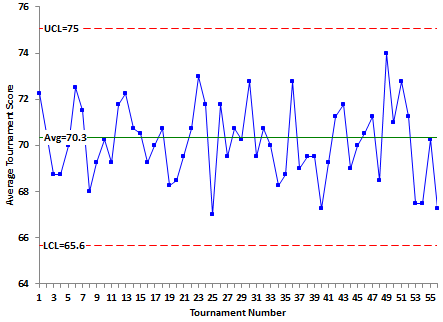 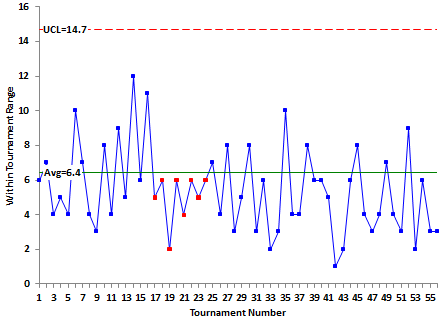 We used the X-R control chart in this newsletter.  The X-R control chart is a powerful tool for examining sources of variation but it is critical to set up the chart to explore the variation you are interested in.  In this golf example,  we were interested in monitoring our average tournament score as well as our consistency.  The chart we used was setup to examine that variation.  Note that, if we had plotted each individual tournament result, we would have been looking at different sources of variation.  This is the principle behind rational subgrouping.

Next month we will take a more in-depth look at rational subgrouping including some rules to follow.