When I was first introduced to control charts, the X-R chart was used the most. This was some years ago – back in the early 1980s. The control charts we did back then were done manually – doing the calculations using a calculator and manually plotting the points, averages, and control limits. There is still something to be said for teaching control charts using this manual method. We definitely tried to keep things simple.

There were a number of control charts I was exposed to back then. One was the X-s chart. This chart is similar to the X-R chart, except that the subgroup standard deviation is used instead of the subgroup range for the within subgroup variation.
In this publication, we will compare the two charts to see when you use one or the other. Traditionally, it has been suggested that you use the X-R chart with subgroup sizes of 9 or less; you use the X-s chart with subgroup sizes larger than 9. For the purposes of this publication, the chart to use is the one that gives you the best estimate of the process standard deviation. A simulation was developed to help do this.

The basic conclusion is that there is no reason not to use the X-s chart all the time.

These two control charts are quite similar. Each is really two charts – one to track the between subgroup variation and the other to track the within subgroup variation. You start with the individual values and then form subgroups of size n. For example, suppose you are tracking the weight of bags containing sand. You are measuring the weight for 5 consecutive bags at the start of each hour. You take those 5 weights and form a subgroup. In this case, the subgroup size, n, is 5. The average of each subgroup is calculated using the following:

where Xi is are the individual X results in the subgroup. This is repeated and the X values are plotted over time. So, the X chart monitors how the subgroup averages vary over time – this is why it is said to track the between subgroup variation.

The two charts differ in how they track the within subgroup variation. For the X-R chart, the subgroup range is used. The range within a subgroup is defined as the largest value minus the smallest value:

For the X-s chart, the subgroup standard deviation (s) is used:

Once you have sufficient data, you can begin to calculate the averages and control limits. These calculations are given below:

For more information on the X-R and X-s control charts, please visit our SPC Knowledge Base.

Another reason is that as the subgroup size, n, increases, the standard deviation becomes a better estimator of the process standard deviation – the variation in the process. Is that true? Quite often, the suggestion is to use the  X-R chart when n is less than 8 to 10. Different sources suggest either 8, 9 or 10. Otherwise, for larger subgroups, use the  X-s chart. The rest of this publication takes a look at how accurate this is.

where d2 and c4 are constants that depend on subgroup size. We will use the value of σ to help compare how well the  X-R chart and  X-s chart perform and when you should use one or the other.

To determine how well the X-R chart and X-s chart perform, a simulation was run multiple times. A "population" of 5000 randomly generated numbers was created using the random number generator in the SPC for Excel software. The normal distribution was used with an average of 100 and standard deviation of 10. The actual values for the 5000 points are:

These 5000 points represent all the possible outcomes from a process. The simulation uses subgroup sizes from n = 2 to 20. The number of subgroups for each simulation is k = 20. The simulation works in the following way:

The results of the simulation are described below.

Control Charts from a Stable Process

Figure 1: X Chart with Limits Based on the Average Subgroup Range 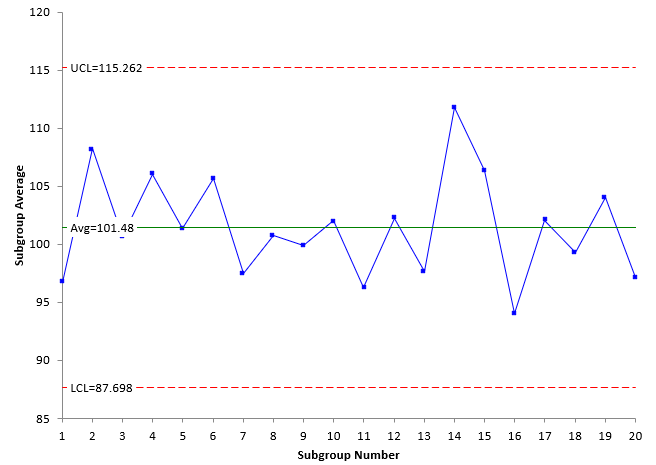 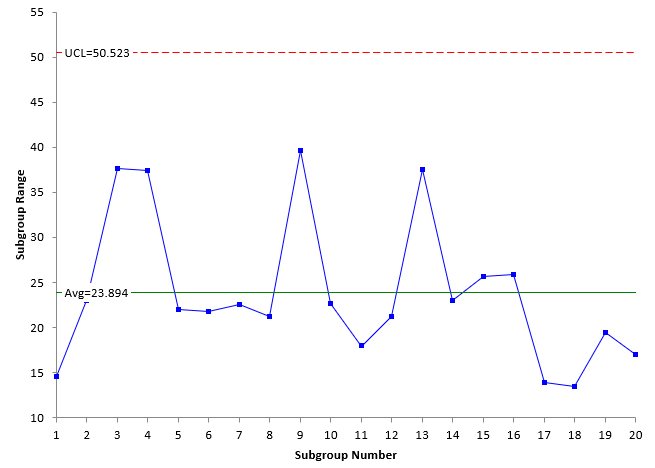 Figure 3 : X Chart with Limits Based on the Average Subgroup Standard Deviation 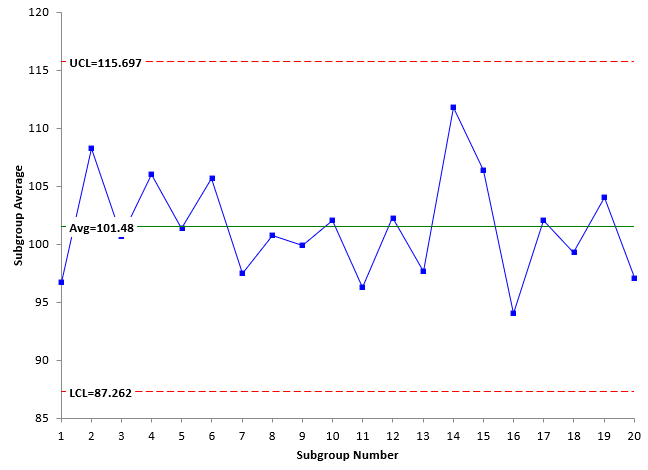 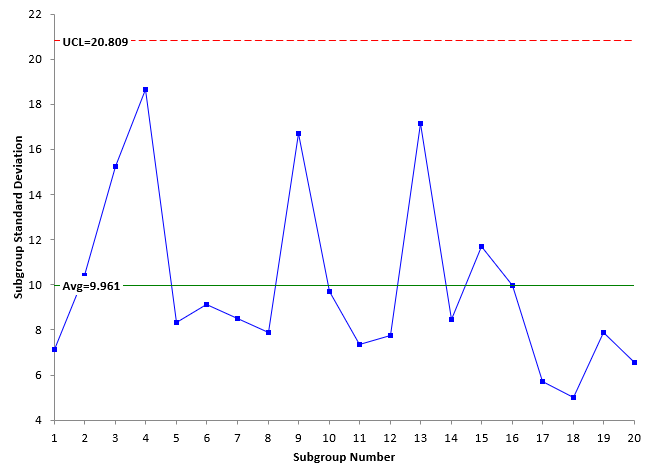 The control charts in Figures 1 to 4 are in statistical control – there are no points beyond the control limits or patterns in the data. The process standard deviation can be calculated for the two charts as shown below:

Note that is one time going through the process of determining the process standard deviation. The simulation does this 1000 times for each subgroup size and chart and takes the overall average of the 1000 results for each chart to estimate σ.

Simulation with a Stable Process

The simulation was run 1000 times to determine the average long-term value of σ as a function of subgroup size. The results are shown in Table 1.

This table contains the average of the 1000 estimates for R and s for the various subgroup sizes. It also includes the control chart constants needed to determine σ. The values of σ are included in the table. The values of σ are plotted in Figure 5 along with the "true" population average.

Figure 5: Values of σ from the Simulation for a Stable Process 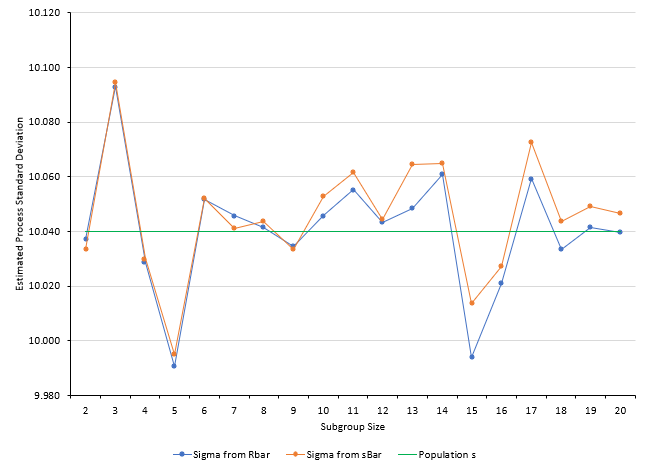 The values of σ are close to the population value of 10.0401. For n values up to 9, the estimate of σ is about the same between the two charts. Sometimes the σ from R is higher than the σ from s. Other times it is not.

It appears, that for a stable process, it doesn't matter whether you use the  X-R chart or the X-s chart for subgroups n = 2 to 20.

But what about unstable processes? Two cases are considered below.

The simulation was run again using this distribution. The tabular results are not included here but are in the workbook containing the simulation at this link. Figure 6 shows the results for σ.

Figure 6: Values of σ from the Simulation for Mixed Processes 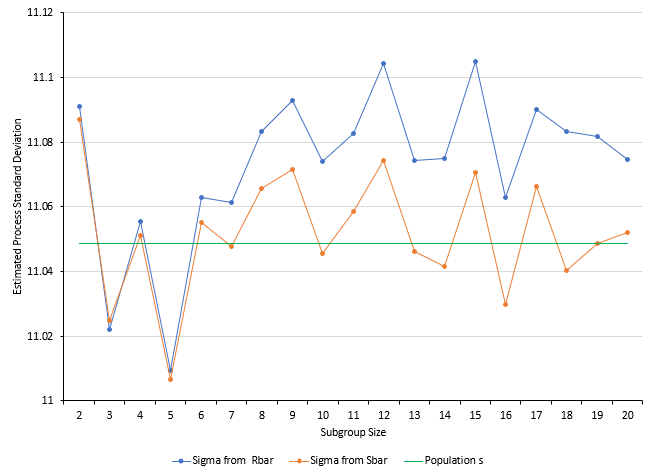 For n = 2 to n = 5, the results are similar. But from n = 6 on, the value of σ estimated from R is considerably higher than that estimated from s. So, when there is some additional variation added to the mix, it appears that s is a much better choice than R to estimate σ.

Simulation with Out of Control Points Added

Figure 7: Values of σ from the Simulation with Out of Control Points Added 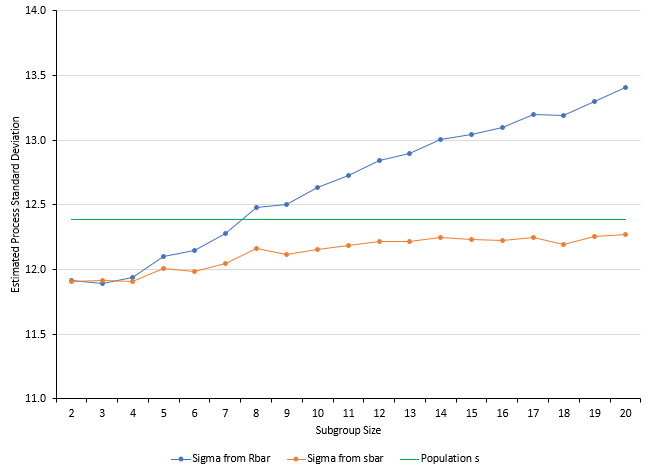 If the process is out of control, then neither method is that accurate although the s method appears to be a better choice as n increases.

The first scenario was a stable process. In this scenario, there was little different between the values of σ obtained from the two different charts. It really doesn't matter that much which chart you used.

The second scenario used a mixed process. In this scenario, using s gave better results. R seemed to overestimate the value of σ.

The third scenario added some out of control points to the process. Neither method predicted σ very well. This is not surprising since the process is out of control. However, it did appear that R definitely inflated the value of σ.

Final conclusion: it appears to me that you might as well use the X-s chart all the time. It works just as well as the X-R chart for the smaller subgroup sizes and it seems to handle out of control situations better overall.