Not all data are normally distributed.  There are many naturally occurring distributions.  For example, the exponential distribution is often used to describe the time it takes to answer a telephone inquiry, how long a customer has to wait in line to be served or the time to failure for a component with a constant failure rate.  These types of data have many short time periods with occasional long time periods.  These data are not described by a normal distribution.

So, how can you handle these types of data?  This publication examines four ways you can handle the non-normal data using data from an exponential distribution as an example.   In this issue:

You may download a pdf copy of this publication at this link.

To examine the impact of non-normal data on control charts, 100 random numbers were generated for an exponential distribution with a scale = 1.5.  The scale is what determines the shape of the exponential distribution.  Maybe these data describe how long it takes for a customer to be greeted in a store.   Usually a customer is greeted very quickly. The data are shown in Table 1. 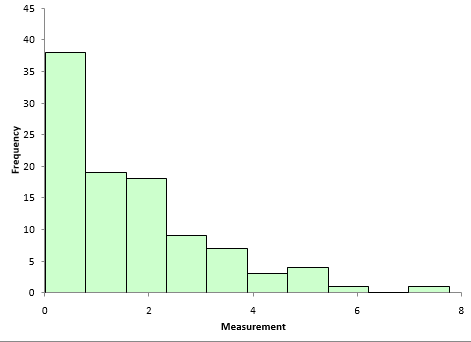 That is not the case with this distribution.  It is skewed towards zero.  The high point on the distribution is not the average and it is not symmetrical about the average.  For more information on how to construct and interpret a histogram, please see our two part publication on histograms. 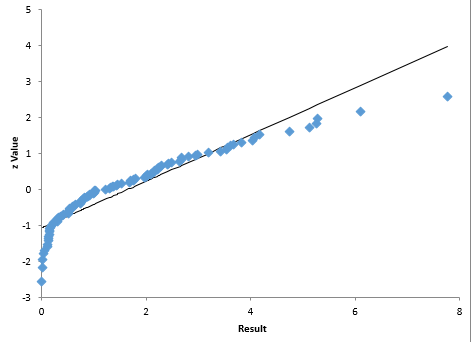 So, now what? How can we use control charts with these types of data?  What are our options?  Basically, there are four options to consider:

If you had to guess which approach is best right now, what would you say?  You are right!  Actually, all four methods will work to one degree or another as you will see.

The X control chart for the data is shown in Figure 3.  Since the data cannot be less than 0, the lower control limit is not shown.

The UCL is 5.607 with an average of 1.658.  The two lines between the average and UCL represent the one and two sigma lines.  These are used to help with the zones tests for out of control points.  Only one line is shown below the average since the LCL is less than zero.  For more information, please see our publication on how to interpret control charts.

If you look back at the histogram, it is not surprising that you get runs of 7 or more below the average – after all, the distribution is skewed that direction.  The conclusion here is that if you are plotting non-normal data on an individual control chart, do not apply the zones tests.  These tests are designed for a normal (or at least a somewhat symmetrical) distribution.  Using them with these data create false signals of problems.

Removing the zones tests leaves two points that are above the UCL – out of control points.  With our knowledge of variation,  we would assume there is a special cause that occurred to create these high values.  Are these false signals?  Remember, you cannot assign a probability to a point being due to a special cause or not – regardless of the data distribution.  So, are they false signals? In the real world, you don’t know.  But wouldn’t you want to investigate what generated these high values?

Figure 4 shows the moving range for these data.  Not surprisingly, there are a few out of control points associated with the “large” values in the data.

The amazing thing is that the individuals control chart can handle the heavily skewed data so well - only two “out of control” points out of 100 points on the X chart.  This demonstrates how robust the moving range is at defining the variation.  The +/- three sigma limits work for a wide variety of distributions. 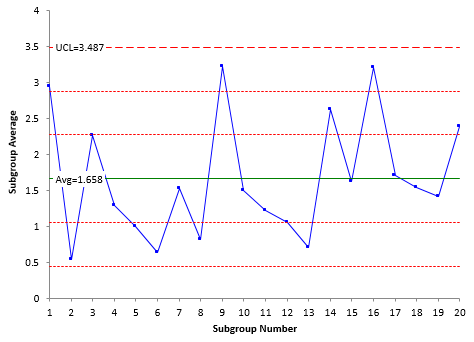 Note that this chart is in statistical control.  In addition, there are no false signals based on runs below the average (note: with a larger data set, there probably would be some false signals).  Subgrouping the data did remove the out of control points seen on the X control chart.  So, this is an option to use with non-normal data.  But, you have to have a rational method of subgrouping the data.

This control chart does still have out of control points based on the zone tests, but there are no points beyond the control limits.  So, transforming the data does help “normalize” the data. The biggest drawback to this approach is that the values of the original data are lost due the transformation.  You cannot easily look at the chart and figure out what the values are for the process. 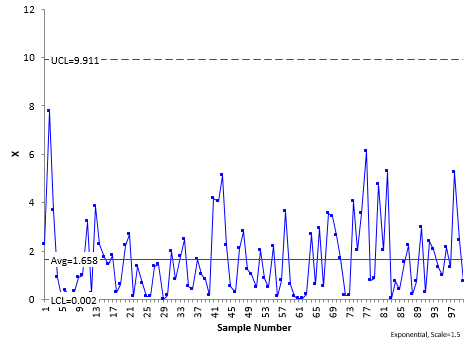 There is nothing wrong with using this approach.  It does take some calculations to get the control chart.  But with today’s software, it is relatively painless.

This publication looked at four ways to handle non-normal data on control charts:

Individuals control chart: This is the simplest thing to do, but beware of using the zones tests with non-normal data as it increases the chances for false signals.  The +/- three sigma control limits encompass most of the data.  And those few points that may be beyond the control limits – they may well be due to special causes.  But then again, they may not.  Probably still worth looking at what happened in those situations.

X-R control chart: This involves forming subgroups as subgroup averages tend to be normally distributed.  You need to have a rational method of subgrouping the data, but it is one way of reducing potential false signals from non-normal data.

Transform the data: This involves attempting to transform the data into a normal distribution.  This approach will also reduce potential false signals, but you lose the original form of the data.  No one understands what the control chart with the transformed data is telling them except whether it is in or out of control.

Non-normal control chart: This involves finding the distribution, making sure it makes sense for your process, estimating the parameters of the distribution and determining the control limits.  This approach works and maintains the original data.  But it does take more work to develop – even with today’s software.

So, looking for a recommendation?  Stay with the individuals control chart for non-normal data.  Simple and easy to use.   Don’t use the zones tests in this case.  If the individuals control chart fails (a rare case), move to the non-normal control chart based on the underlying distribution.  There is nothing wrong with this approach.  Only subgroup the data if there is a way of rationally subgrouping the data.  Stay away from transforming the data simply because you lose the underlying data.