(Note: all the previous publications in the variable control charts category are listed on the right-hand side.  Select "Return to Categories" to go to the page with all publications sorted by category.  Select this link for information on the SPC for Excel software.)

A control chart normally monitors one variable over time. Perhaps this variable is machine uptime, a product characteristic, or on-time delivery. There are times, however, when the simultaneous monitoring of two or more related variables is important. The group of control charts that do this are called multivariate control charts. The most familiar one of these is the Hotelling T2 control chart or just the T2 control chart. This control chart is introduced in this publication.

In 1947, Harold Hotelling introduced a statistic which allowed multivariate observations to be plotted on a single chart. This statistic is now called Hotelling’s T2 statistic. The statistic combines information from the mean as well as the dispersion of more than one variable. The calculations, which include some matrix algebra, are more difficult than those of “normal” control charts. This was a barrier to using multivariate control charts until software that could perform the calculations came along.

A few words of caution. The T2 control chart, like other multivariate control charts, plots a value on the chart that you really can’t explain too well. Suppose you have two variables that are important in an adhesive process. The adhesive is characterized by two variables, pH and viscosity, which need to be controlled. Data for 20 batches are shown below for pH and viscosity. The data in this example is adapted from “Advanced Topics in Statistical Process Control” by Donald Wheeler (www.spcpress.com). 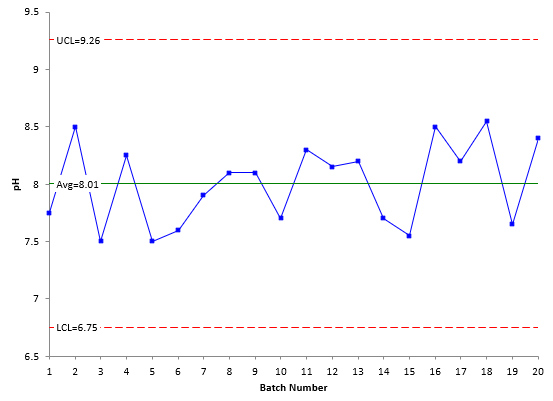 Figures 1 and 2 are both in statistical control. Look at the figures again. Notice anything? The two figures have very similar patterns. This implies that the two variables are correlated. A scatter diagram for the two variables is shown in Figure 3. 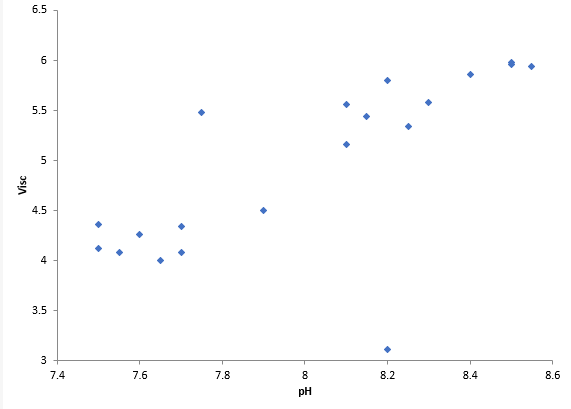 The scatter diagram shows that the two variables are related. As pH increases, the viscosity tends to increase. Note the point at the bottom of the scatter diagram for a pH of 8.2. This data pair looks like it might be an outlier, despite the X charts being in control. This is where the T2 control chart can be used. It is designed to see the impact of multiple variables at the same time.

Figure 4 is the T2 control chart for the data in Table 1. 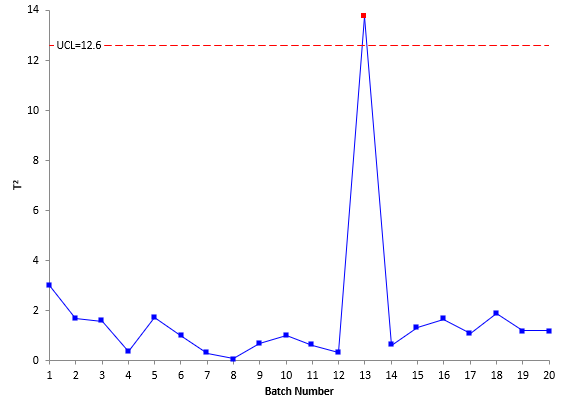 The first step in creating a T2 control chart is to calculate the values of T2. This is where matrix algebra comes in. The value of T2 is given by:

where x is the sample mean vector and S is the sample covariance vector. The bolded characters represent vectors.  This is clearly now a little more complicated than the calculations for the basic control charts, but we will give you the general idea of how it is done for the case of two variables.

The transposed matrix has a column for each point and a row for each variable.

So, for pH, v1 is the difference between the second pH value and the first pH value:

where m = number of samples. The components of V are given below for the two variables.

So V has a column for each variable and m – 1 rows. S can now be found using the following:

where V’ is the transpose of V. You can easily multiply two matrices in Excel using the function MMULT. If you multiply V’ by V, you get the following:

Remember that T2 is given by:

S-1 is the inverse of S. You can use the Excel function MINVERSE to find the inverse. Using that function gives:

So, for the first point:

You can use the Excel MMULT function to multiply these three matrices together. The result is given below.

This is the value of T2 for the first data point. The above process can be used to generate the T2 values for the rest of the data. The values of T2 are shown in the table below.

Table 2: Values of T2 for pH and Viscosity

These are the values that are plotted in the T2 control chart in Figure 4. The other calculation that is needed is for the UCL. And, of course, this is a little more complicated here as well. The upper control limit based on individual observations is given by the following:

Out of Control Points