Medians and the Individuals Control Chart

This publication explores using median values for the centerlines on the X and mR charts. We will start with a review of the individuals control chart. Then, the individuals control charts using median values is introduced. The charts look the same – the only difference is the location of the centerlines and control limits. Then we will look at an example of a process with a lot of out of control points on the mR chart and how using the medians impact the charts.

The first moving range value is the range between samples 1 and 2:

The overall average (X) and the average moving range (R) are then calculated using the following formulas:

The upper control limit (UCLr) for the moving range chart can then be calculated. 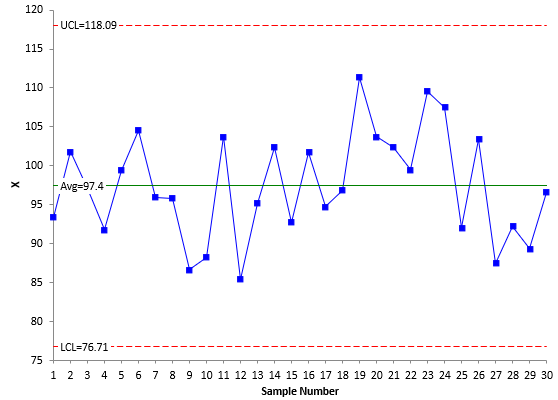 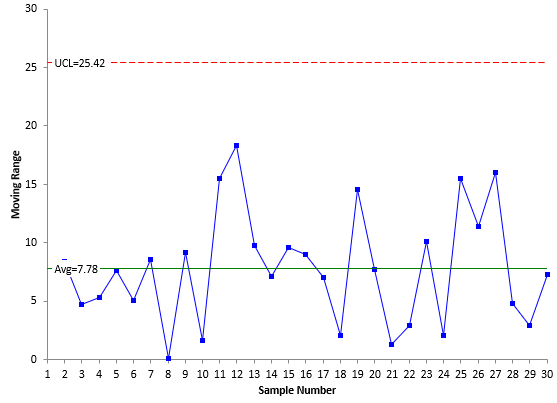 Both charts are in statistical control – there are no points beyond the control limits or patterns in the data (e.g., 8 points in a row below the average). Now let's compare the difference when the median values are used.

You can use the median for the X values and the moving range values in place of the averages. The charts look the same, but have different center lines – and therefore, different control limits. For a process that is in control, there is not much difference between the two.

The control limits based on the medians are given below: 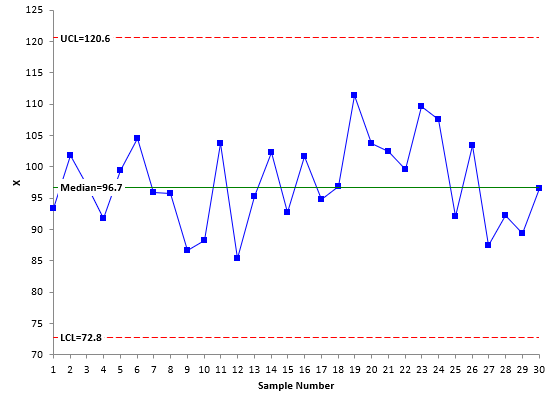 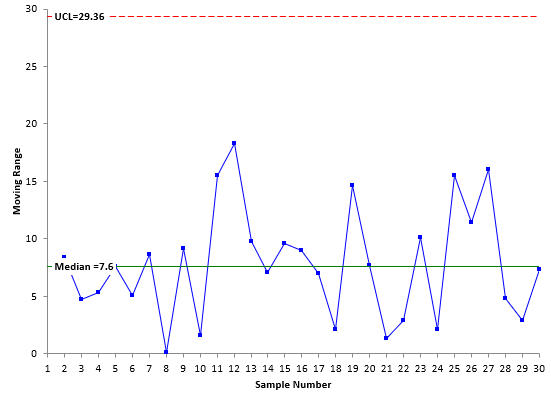 If you compare Figures 1 and 3 and Figures 2 and 4, you will see that they look essentially the same. The only minor difference is the location of the centerlines and control limits. This is not surprising for a process that is in statistical control. Table 2 compares the results.

So, for a straightforward case like this, the two methods give similar results. But what about times when there are out of control points?

A histogram of the time to complete the calls is shown below. 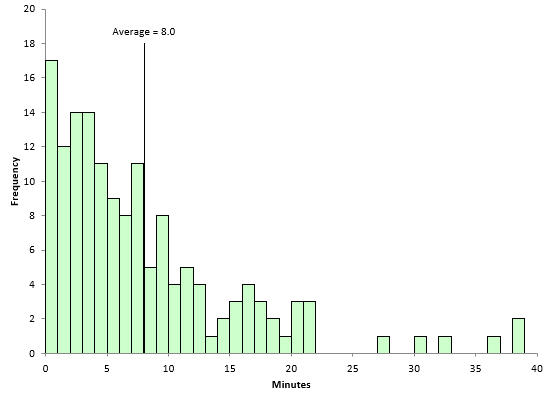 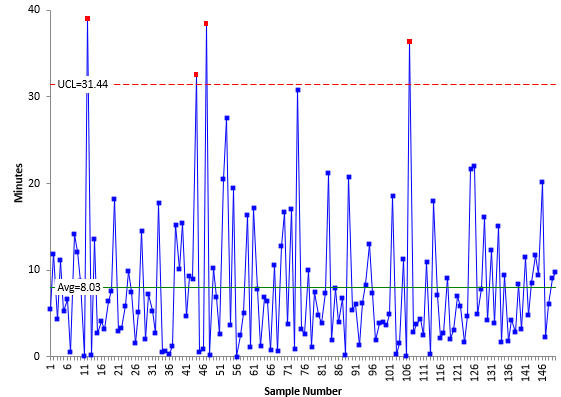 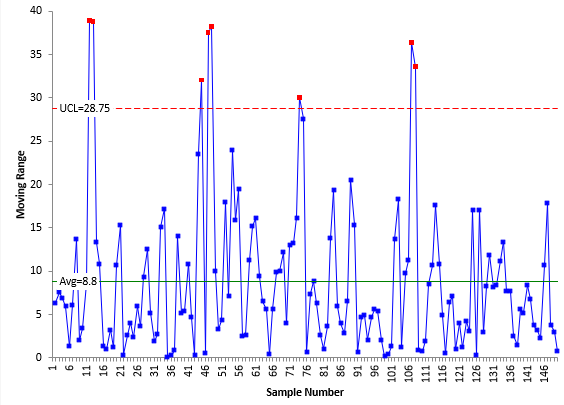 The X chart does not have a LCL since it is less than zero and that is not possible with time values. The mR based on the range between consecutive points never has a LCL. The X chart has 4 out of control points. The mR chart has 8 points above the UCL. A few are quite a bit above the UCL. This has the effect of inflating R – and thus increasing the width of the control limits on the X chart – leading to potential missed signals. 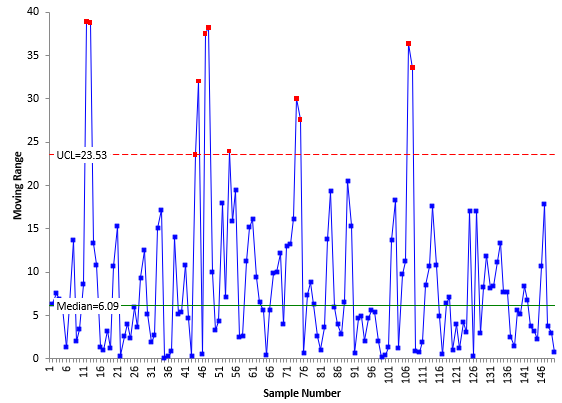 Compare Figures 7 and 8. Again the plotted points are the same. The differences are in the centerline and the UCL. The median moving range in Figure 8 is 6.09, significantly less than R of 8.8. The UCL based on the median moving range is 23.53, significantly less than the UCL based on R (28.75). The mR chart now has 11 out of control points, 3 more than when R is used.

Figure 9 shows the X chart with the control limits based on the median moving range. Note in Figure 9, the average of the X values is still used, not the median X value. 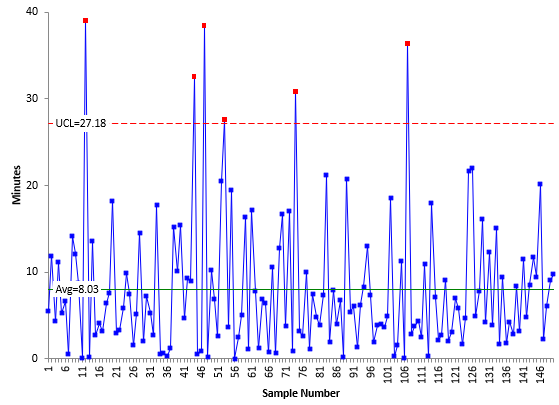 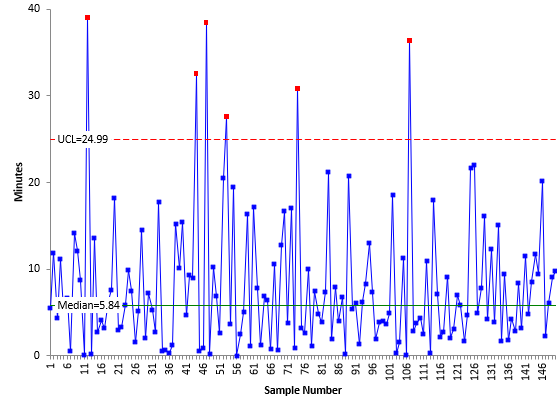 Comparing Figures 9 and 10, you can see that the median X value (5.83) is less than the average (8.03). The UCL is also smaller in Figure 10 then in Figure 9, 24.99 compared to 27.18. In this example, this change did not pick up any additional signals. Table 4 summarizes the differences in the approaches.

You can see how the centerline and UCL decrease when you used the median average range and out of control signals increase.

In this publication, we reviewed the individuals control chart and then introduced how the median X value and median moving range could be used in placed of the traditional centerlines on the X and mR charts. Sometimes R is inflated due to large, out of control moving range values. This potentially masks some signals on the X chart since the control limits on the X chart are based on R. If this is the case, you can use the median moving range. It is not impacted as much by outliers as R. You can also use the median X value.