Variation and the Funnel Experiment

Variation and the Funnel Experiment

Our last blog, The Red Bead Experiment, described a simple process to teach variation to everyone. This blog describes another simple experiment that shows the danger of not using the knowledge of variation you learned from the red beads.

An excellent example of over-controlling is the funnel experiment described by Dr. Deming. The objective of the funnel experiment is to drop a marble through a funnel and hit a target. A point on a level surface is designated as the target. A funnel is held a certain distance above the surface. A marble is dropped through the funnel. The spot the marble comes to rest on the surface is marked. This is repeated for at least 50 drops for each of four different rules, but we will only cover the two rules that govern the overcontrolling example above.

Both these rules lead to processes that are in statistical control. A computer simulation of these two rules is shown below. 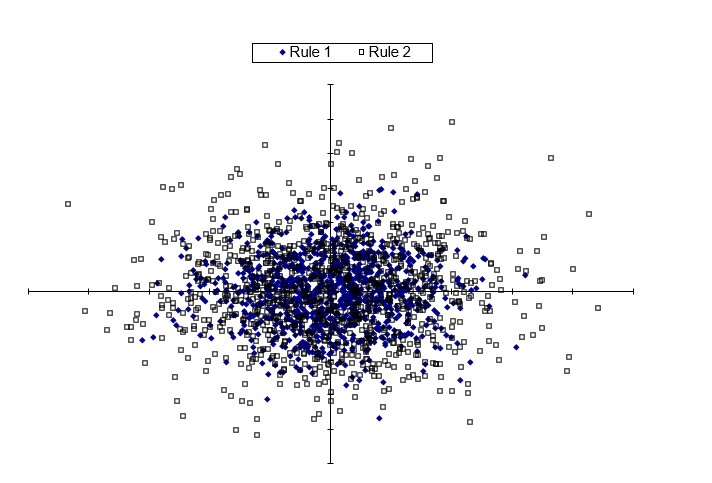 Both generate circles. However, as you can see in the figure above, Rule 2 has a much wider variation – in fact 40% more variation than Rule 1. So, attempting to adjust a process that is in statistical control will create more variation in the process.

For a complete description of the funnel experiment including all four rules, please see our SPC Knowledge Base article, Over-controlling a Process: The Funnel Experiment.

Click here to sign up for our FREE monthly publication, featuring SPC and other statistical topics, case studies and more!