Over-controlling a Process: The Funnel Experiment

This month's sales are lower than last month's sales. What happened? This is a common question heard today in many organizations. Unfortunately, most people don't know how to answer this. A major barrier to the use of control charts is the failure of people to understand the information contained in variation. If you understand this information, you will realize that the type of action required to reduce special cause variation is totally different from the type of action required to reduce common cause variation. You will also understand why costs decrease as quality improves, and management that blames all its problems on the employees is totally wrong.

To understand variation, it is essential to understand the difference between a process that is in statistical control (stable) and a process that is out of control (unstable). To determine the difference, we must know how to plot points and then decide by some rational method if the process is in control. There are many things we can plot, including weekly sales figures, customer complaints, product responses, inventory, absenteeism, accidents, accounts receivable, turnover, etc.

A key to understanding variation is to plot the points in the order they were produced. For example, you might plot accounts receivable on a weekly basis. After plotting a sufficient number of points, the next step is to question whether the process that produced the data is in statistical control. Why do we want to consider statistical control? The major reason is that the type of action required to improve a process is different for a process that is in control than for a process that is out of control. A major fault, which exists in many places today, is the assumption that every event (defect, mistake, accident) is attributable to someone or is related to one event. For example, suppose this month's expenditures versus budget (the variance) is slightly higher than last month's variance. Why did this occur? Is it attributable to one person or one event? We often spend a lot of time looking for these types of answers. The fact is, however, that most troubles with service and production lie in the system and are not attributable to one person or one event.

Good management of people and of processes requires the knowledge of how to separate the two kinds of causes. The only good way to do this is through the use of control charts.

A control chart sends us a statistical signal. This signal tells us if there is an special cause present or if the observed variation is attributable to the system. For example, if a point is beyond the control limits, this is a signal that a special cause is present. The front-line personnel should find out the reason for the special cause and permanently remove it from the system so it won't occur again. Is it possible that this out-of-control point is not due to a special cause and is really due to common causes (mistake 1)? The answer to this is yes, but it is highly improbable.

Assume that a process is in statistical control (only common cause variation present). If you plot 1000 points from this process, only three will be beyond the control limits. Therefore, anytime a point is beyond the control limits, there is only a 3 in 1000 chance that it is due to common causes. Since this probability is low, it probably is due to a special cause. Thus, the control limits help minimize how often we make mistake 1. (Note: since no process is really unwavering, you cannot assign any probability that a statistical signal may be wrong.)

We will make mistake 2 more often than mistake 1. Points that lie between the control limits are assumed to be due to common cause variation. It is possible that a special cause is present from time to time but the point will still lie between the control limits. We are willing to make this mistake more often because it does not require any action from us. If a point is out of control, it takes time and energy to find out what happened. We want to be sure that there is a special cause present before we start looking for it. Control limits help us accomplish this.

A process is in statistical control if there are no special causes present. It represents a random process that is predictable in the near future. For example, we don't know what the exact value of the next data point will be, but we do know that it will fall between the control limits. We also know what the long term average of the process will be. No action is taken on the "ups" and "downs" in the process. Being in statistical control is not a natural state. It is obtained by eliminating special causes one by one. In addition, costs are predictable and at a minimum for a process that is in control. Productivity is at a maximum.

The responsibility for improving a process in statistical control lies with management. Front-line personnel may have excellent suggestions on how to do this. Improving a process that is in control may mean changing the average or reducing variation. It is a never-ending process. The system must be changed to improve the process. Examples of system changes include new machines, new methods, and new materials.

Suppose your process is out of control and you try to improve the process by changing the system. For example, suppose you want to decrease the average turnaround time for memos. To accomplish this, you buy a new software package. The next point you get is below the average. Have you improved the process? You don't know, because the original process was not in control.

Dr. Deming has said "If anyone adjusts a stable process for a result that is undesirable, or for a result that is extra good, the output that follows will be worse than if he had left the process alone." This is often called tampering with the process. It is something that is done often by front line personnel and very often by management. This increases variation as well as losses in a process. Doing your best is no longer sufficient. You must know what to do.

An excellent example of over-controlling is the funnel experiment described by Dr. Deming. The objective of the funnel experiment is to drop a marble through a funnel and hit a target.A point on a level surface is designated as the target. A funnel is held a certain distance above the surface. A marble is dropped through the funnel. The spot the marble comes to rest on the surface is marked. This is repeated for at least 50 drops for each of four different rules.Each of the four rules is discussed below.

Rule 1 is to leave the funnel fixed over the target. The marble is dropped at least 50 times and the spot where the marble comes to rest is marked each time. The resulting pattern is shown in the adjoining figure. This is a computer simulation of 100 marble drops. The target is where the solid lines cross.

As can be seen in the figure, the variation is a rough circle and is stable. Surely we can do better than this! This circle is too big. Why don't we simply adjust the funnel after each drop so the next drop will be closer to the target?

For every drop, the marble will come to rest a distance "z" from the target. Rule 2 is to move the funnel a distance -z from its last position. The resulting pattern based on the computer simulation is shown in the figure to the left where Rule 2 is compared with Rule 1.

As can be seen in this figure, the pattern for Rule 2 is also circular and stable. However, the circle is larger than for Rule 1. It is about 41% larger. Using Rule 2 actually increases the variance of the process by a factor of 2 over Rule 1.

Rule 2 is often used in business by people just trying to do their best. This is why it is important to understand the information in variation. By responding to variation that is common cause as if it were special cause, you are increasing the variation in your process.

Under Rule 3, the marble drop swings back and forth. The pattern looks similar to a bow tie. This is not a stable process. The amplitude of the swings will continue to increase.

Rule 4 is simply to set the funnel over where the last drop came to rest. The pattern for this variation is shown in the adjoining figure. Under this rule, the marble eventually goes off in one direction. It will not return. This is not a stable process.

Examples of the Rules 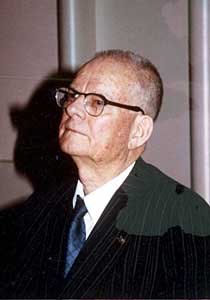 Examples of Rule 2 include:

Examples of Rule 3 include:

Examples of Rule 4 include:

Note: Permission to use the Media Gallery photo of Dr. Deming granted by Diana Deming Cahill of the W. Edwards Deming Institute.