In December 2015, we looked at global warming through the eyes of a control chart.  The data indicated that there were periods of stability – where the temperature neither increased nor decreased.  In between these periods of stability, there were sudden step changes until around 1977.  Since then, there appears to have been a steady upward trend in the global temperature on almost a yearly basis.

In January 2016, we examined the data from 1997 on using a trend control chart.  We predicted what we thought the global temperature increase would be in 2016.  We predicted an increase of 0.764 °C.  This publication looks at how close we were with our prediction and updates the charts with the most recent information.  It turns out that we didn’t do so well. The temperatures are getting hotter more quickly than our trend control chart predicted.

The data used in all our publications so far were downloaded from the Goddard Institute for Space Studies (GISS) website at this link.  GISS is part of the National Aeronautics and Space Administration (NASA).  Our first publication on global warming was entitled “SPC and Global Warming.”  came In this December 2015 publication, we looked at using a control chart to see periods of stability (homogeneity in the temperatures) and periods when the global temperature was increasing.  The data covered the years from 1880 – 2016.   The data used in that first publication were based on the meteorological station data, which is called the dTs data.

There is also the LOTI (land-ocean temperature index).  According to the GISS website, LOTI "provides a more realistic representation of the global mean trends than dTs; it slightly underestimates warming or cooling trends, since the much larger heat capacity of water compared to air causes a slower and diminished reaction to changes; dTs on the other hand overestimates trends, since it disregards most of the dampening effects of the oceans that cover about two thirds of the earth's surface."

I assumed that I would simply take the deviation for 2016, add it to my dataset and update the control chart to see how 2016 played out.  I re-downloaded the data and was surprised to see that the data had changed somewhat.  There were not big changes – in the range of 0.01 or 0.02 °C.   So, I contacted Dr. Reto A. Ruedy who oversees the on-line data to find out why the data changed.  Here is his response:

“https://data.giss.nasa.gov/gistemp/faq/#q211 indicates that the estimates for these monthly mean anomalies come with an error bar of +-0.15 deg C, which is about 10 times larger than the differences you spotted, i.e. these changes are insignificant.

This still leaves the question why those estimates change. There are several potential reasons:

I very much appreciate Dr. Reto’s response.  So, there are some reasons the data changes slightly as it is updated, but it appears to be well within the error of 0.15 °C.  So, it is part of the noise.  I am still not sure about historical data that changes over time – no matter how slight the change.

But since the data had changed, the data were re-downloaded and the updated data was used for this analysis.  The data are now in deviations and you don’t have to divide by 100 as we did in January 2016.

Figure 1 is a plot the global temperature deviation as run chart over time from 1880 using the current data as deviations from the baseline period. 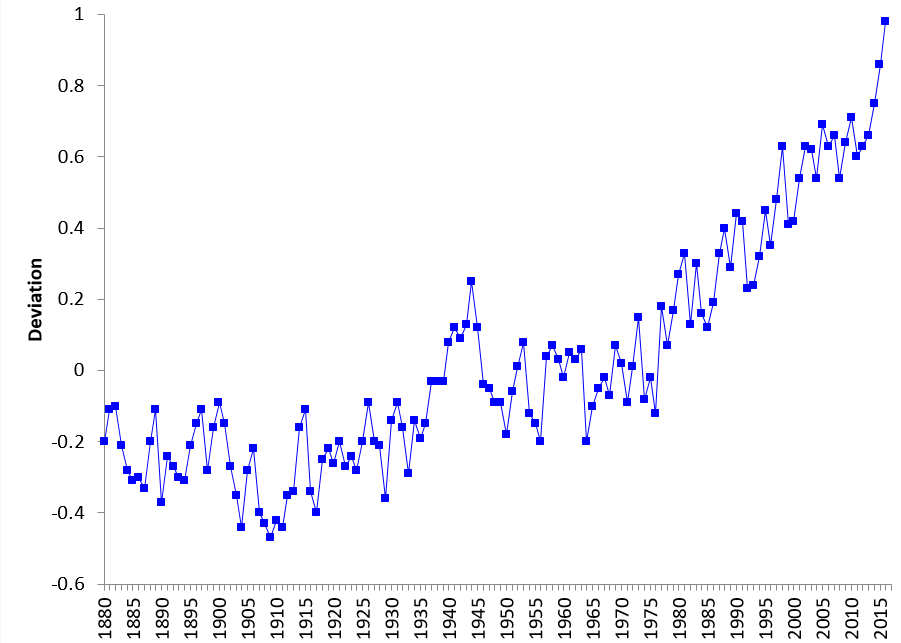 These data show patterns like the dTs data from December 2015.  There are periods of “constant” temperature that is followed by step change – upward through most of the chart.

Trend Control Chart Approach from 1997 On 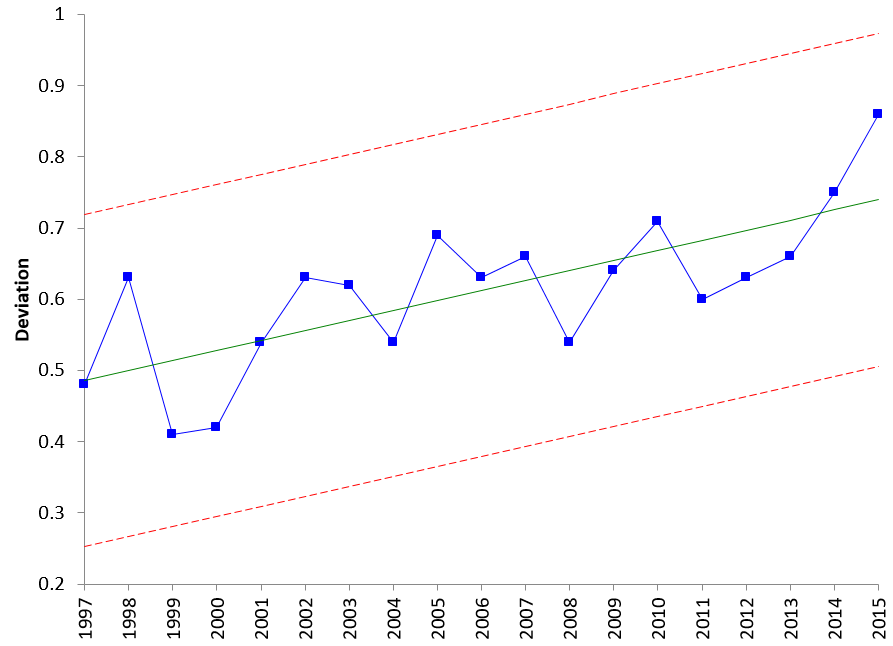 A little review on trend control charts.  The trend control chart handles situations where the data are increasing or decreasing in a predictable fashion.  The first step is to determine the best-fit line of the data.  This equation has the following form:

where (for our example) Xt is yearly global temperature deviation, t is the year, m is the slope of the line and b is the y-intercept.  You then substitute this equation for the average in the control limit equations.  So, the control limits for the trend control chart are given by:

where R  is the average moving range between consecutive points (0.0878 in this example).

You can now use the trend control chart to predict, within a range, what the deviation in the global temperature will be in 2016. 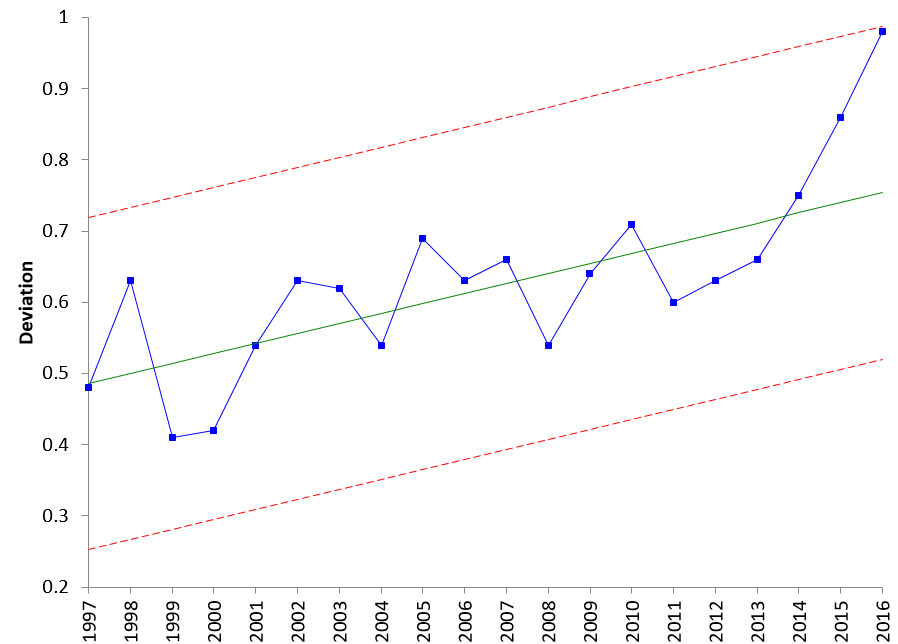 This month’s publication updated our two previous publications on global warming.  Our last publication on global warming had predicted an increase in 2016 of 0.764 °C.  The data had changed somewhat and were re-analyzed in this publication. The predicted increase in 2016 was 0.746.  How was our prediction?  Not too good.  The deviation in 2016 was 0.98 °C – the largest ever seen so far.  The 2016 point is right at the UCL on the trend control chart with limits based on 1997 to 2015 data.  And the last four years have set up a new trend most likely with a much higher slope for increasing deviations each year.  The results suggest that we will be getting hotter for a while.