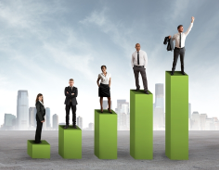 You may download a pdf version of this publication at this link.  Please feel free to leave a comment at the end of this page. 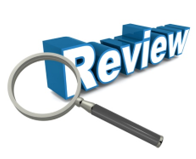 where b0 is the y-intercept and b1 and b2 are the coefficients for the predictor variables x1 and x2.

If a predictor variable (e.g., x1) does not impact Y, we would expect the coefficient (e.g., b1) to be zero.  However, there is variation in our processes and, when you run a regression, the coefficients that do not impact Y are not zero.  We need a method of determining if a coefficient is sufficiently close to zero to be called zero or is far enough away from zero to be considered significant.  We do this through the p value associated with a t-test.

For example, consider the dataset in Table 1.  We have collected data on x1, x2 and Y.  We want to use regression analysis to build a model for Y.

Part of the output from the regression analysis using SPC for Excel is shown in Table 2.  The table is described below.

From Table 2, it can be seen that x1 appears to be significant (p value < 0.05 and interval does not contain 0), while x2 is not (p value > 0.05 and interval contains zero).  The regression could be re-run with just x1 in the model to create the final model.

As we will see, stepwise regression uses the p value to add or remove predictor variables from the model.

A process flow diagram for stepwise regression is shown in Figure 1. 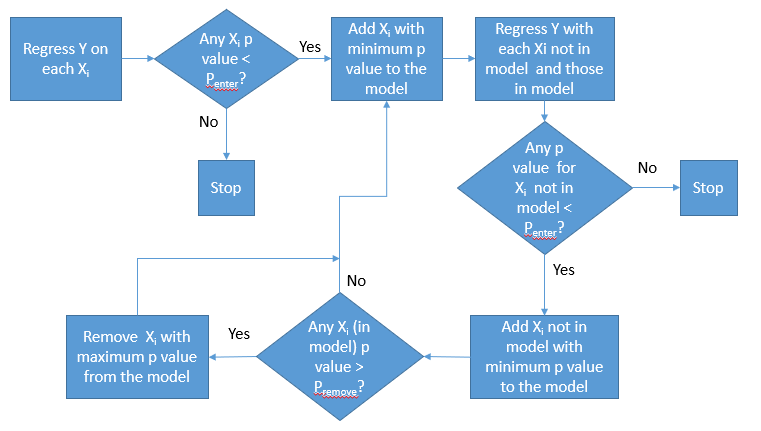 You are a VP of sales and have responsibility for 41 stores.  You have collected data from the stores on advertising costs, store size in square feet, % employee retention, customer satisfaction score, whether a promotion was run or not and sales.  You want to build a model that can predict sales based on these five variables.  The data are shown in Table 3.

A stepwise regression was done on these data using the SPC for Excel software.  The p values to add and remove were both set at 0.15.

After a variable has been added, you check to see if any of the predictor variables in the model now have a p value greater than 0.15 (the p value to remove).  This is not the case, so the model now has two terms: store size and promotion.

The process repeats again using this model that now contains customer satisfaction score and promotion.   Advertising costs has the lowest p value under 0.15 and is added to the model.

You can easily run a full regression analysis that includes only these variables to complete the analysis.

However, if you search the internet about potential problems with stepwise regression, you will get quite a few hits.  To me, the biggest problem (not unique to stepwise regression) is that encourages us not to think.  Here is the model.  You are done.  The problem is that the process is automated.  It can’t contain the knowledge of the subject expert.  You need to look at the model generated by stepwise regression from a practical point of view – does it make sense to the people who are the experts?

Another concern is, if there is excessive linear dependence (called multicollinearity), the procedure can end up throwing most of the variables in the model.  This can also occur if the number of variables to be tested in the model is large compared to the number of samples in your data.  Stepwise regression may not give you the model with highest R2 value (measure of how well the model explains the variation in the data).  Some even say that stepwise regression usually doesn’t pick the best model.

But, in reality, you have to use your knowledge of the process to decide if the model makes sense.  And you can always run validation experiments to confirm the model.

The month’s publication introduced stepwise regression.  This is an automated technique for building a model from a larger number of predictor variables.  The procedure is based on adding or removing predictor variables from a model based on p values.  This procedure, like any automated procedure, cannot take into account your knowledge of the process.  When you have your final model from stepwise regression, you should ensure that it makes sense to you, the subject expert.  And, you should also run confirmation runs to ensure that the model is valid.