You have a set of data. You want to analyze it using a control chart. What do you do? Many of us simply put the data into a software package and select the control chart we want to use – and, presto, we have our control chart. Wonderful, isn't it? So simple. No thinking required.

To explore this concept, two control charts will be examined and compared in this publication: the individuals (X-mR) control chart and the X-R control chart. The X-R chart, at one time, was the most used control chart. It has probably given way to the X-mR chart as the use of SPC spread beyond manufacturing into other areas and "frequent" data became less frequent. If you have infrequent data (like monthly), you don't have many options beyond the X-mR chart. Some say the X-mR chart is the only chart you need to know because it always works. Yes, it usually works – but is it the best choice always?

This publication compares the X-R chart with the X-mR chart to better understand the differences – and to show that the X-mR chart actually can give more false signals than the X-R control chart. A simulation is used to show why this is true. In this issue:

Please feel free to leave a comment at the end of this publication.  You can download a pdf copy of the publication at this link.

Understanding the Variation Being Monitored

Control charts, when properly designed, monitor variation over time. Consider the following scenario. You are in charge of a line that loads a product into bags. The weight in the bags is critical. Too much and you are giving away product; too little and you may get customer complaints that the bag is not full enough.

You want to take four samples per hour to monitor the variation. There are numerous ways you could do this including taking four consecutive samples at the top of each hour (Plan A). In this case, the X-R chart is the best option. Do you know why the X-mR chart is not good for this sampling plan?

Another option is to take a sample every 15 minutes (Plan B). In this case, either the X-R chart or the X-mR chart will work. But is one better than the other? We will see. First, the variation examined on each chart is discussed.

The two sampling plans are shown in Figure 1.

Variation and the X-R chart

What is the X chart monitoring in Plan A for the bag weight example?

The X chart monitors the variation in the average bag weight from hour to hour.

The range chart monitors the variation between results within a subgroup (often called the within-subgroup variation). Each subgroup range is compared to the average range to determine if a significant change has occurred. If a subgroup range is beyond the control limits, it is a signal that something has changed for that subgroup range. This is shown in the figure below.

D4 and D3 are control chart constants that depend on subgroup size.

What is the range chart monitoring in Plan A for the bag weight example?

The range chart monitors the variation in the four bag weights within a subgroup from hour to hour.

What is the difference between Plans A and B? In plan A, four consecutive bags are measured in a row, while with Plan B, four bags are measured at 15 minute intervals. What do you think will be the differences in the X-R charts for Plan A and Plan B? The average range will probably be smaller for Plan A than Plan B. This is because Plan A selects four bags in a row, while Plan B selects one every 15 minutes. Plan A is better than Plan B because of this. It represents one of the tenets of rational subgrouping:

Select the subgroups so the chance for variation within a subgroup is minimized. This forces the X chart to do the work of finding the special causes.

Variation and the X-mR Chart

The mR chart monitors the variation in the range between consecutive X values over time. You can refer to this as the short-term variation for the X-mR chart. Each moving range value is compared to the average moving range to see if it is significantly different. If a moving range is beyond the control limits, a significant difference exists. This is shown in the figure below.

Why shouldn't you use the X-mR chart for Plan A? Plan A collects four consecutive bag weights at the start of each hour. If at all possible, you want to minimize the variation in the mR chart, so the X chart does the work in finding out of control points. You attempt to do this with the X-mR chart by ensuring that the time between the samples is the same. The first three moving ranges represent these differences: |X1 – X2|, |X2 – X3|, and |X3 – X4|. What is the fourth moving range? It is between X4 and X1 for the start of the next hour. A large time difference compared to the first three samples. The odds of these moving ranges being homogeneous is lower due to the sampling. Applying the X-mR chart with Plan A will probably lead to problems – most likely missed signals.

Plan B will work with the X-mR chart. The time period between samples is the same so the short-term variation between consecutive samples will probably be more homogeneous.

What variation is the X chart monitoring in Plan B for the bag weight example?

The X chart is monitoring the variation in bag weights every 15 minutes.

What variation is the mR chart monitoring in Plan B for the bag weight example?

The mR chart is monitoring the variation in consecutive bag weights every 15 minutes.

Notice in the descriptions of what the X-R and X-mR charts are measuring, there is always time mentioned. Time is always a part of the variation a control chart is monitoring.

A simulation was created to compare the X-mR chart and the X-R chart. The objective is to compare the two charts for monitoring a process. Our process for the simulation has an average of 100 and a standard deviation of 10. We will assume that our process is normally distributed. A random number generator was used to generate 10,000 points for a normal distribution.

These 10,000 points represent our "population." This is all possible outcomes from the process. A histogram of the 10,000 points is shown in Figure 2. 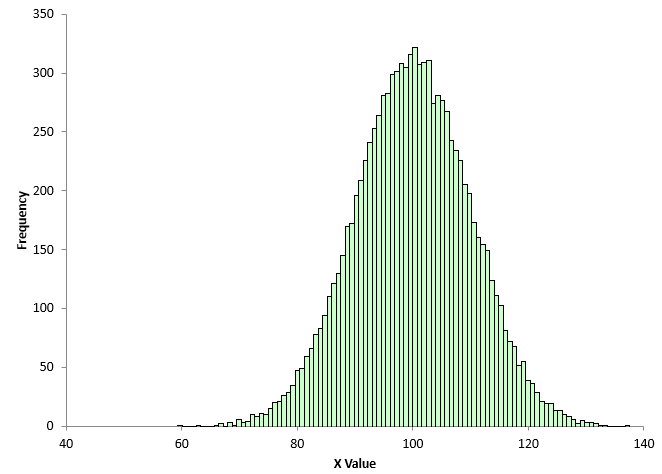 The average of the 10,000 point is 99.999 with a standard deviation of 9.931. This population is randomly sampled to obtain the X values. Since these 10,000 values don't change and the samples are randomly selected, you would expect the process to be in statistical control.

The simulation (created in Excel) is run the following way:

You might ask why this simulation is repeated 1000 times. It is called variation. The simulation could be run 1 time and the results for the two control charts compared. But will you get the same result the second time you run the simulation? Most likely not.

Figures 3 and 4 show the results for the X-mR chart from one run of the simulation. 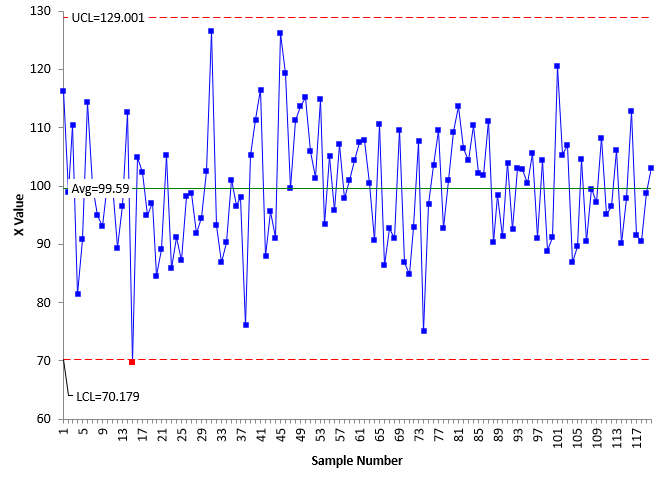 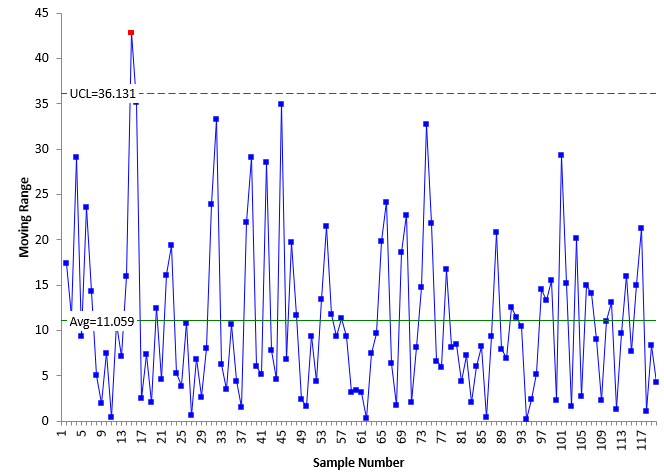 There is one out of control point on each of the X chart and the X-mR chart. Are these true signals that the process has changed? No, they are not. The process doesn't change, and the X values were drawn at random from the process. These are false signals.

The fraction of area beyond +/- 3 standard deviations for a true normal distribution (doesn't exist) is 0.0027 – which means you would expect 2.7 false signals per 1000 points you plot.

Figures 5 and 6 show the results for the X-R chart using the same data as in Figures 3 and 4 but with a subgroup size of 4. 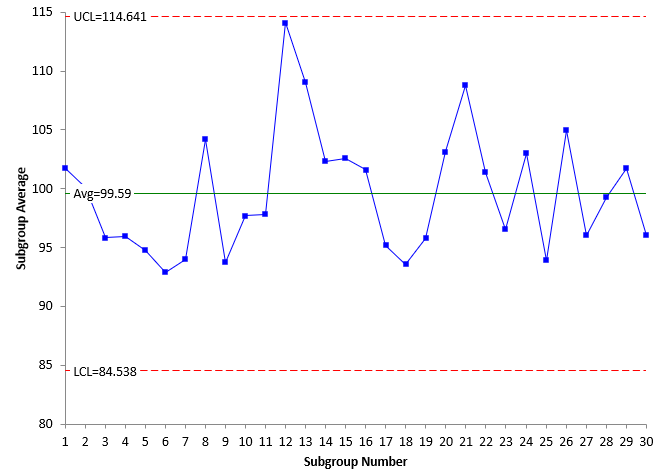 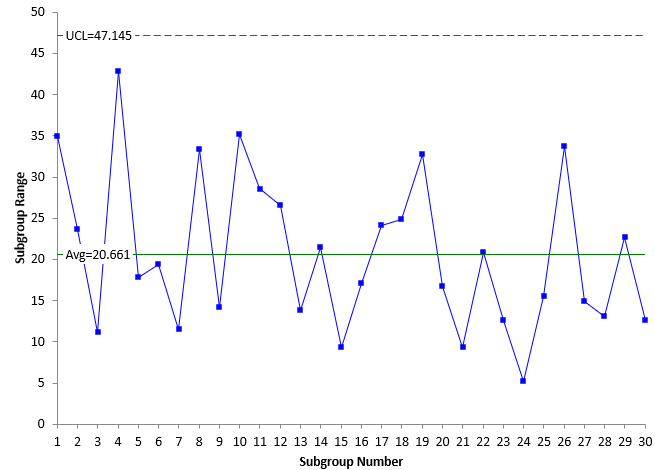 Now, let's see the results from running the simulation 1000 times.

The simulation was run 1000 times. The calculations were done for each control chart. The results are summarized in the table below.

The results look at two items primarily: the % of charts out of the 1000 that had at least one point beyond a control limit and the % of points beyond the control limits. Remember, the process is stable, so theoretically, these are false signals. When an X-mR chart is used, 24% of the time the X chart had an out of control point. 65% of mR charts had at least one out of control point. Both these are larger than the corresponding numbers for the X-R chart, at 7% and 11%.

This implies that the X-mR produces more false signals than the X-R chart. Part of the reason for this is that the X-mR plots each individual value while the X-R plots subgroup averages – fewer points when the same data set is used in each chart. The points plotted on the X chart for 1000 charts at 120 points a chart is 120,000. The X chart has 30 subgroup averages on each chart or 30,000 total points plotted (1/4 of the X chart points since using a subgroup size of 4).

The % of points beyond the limits for the X and X chart is essentially the same at 0.24%. You would expect this since they both follow the normal distribution. The mR chart though has 0.85% points out of control compared to 0.38% for the range chart.

Figures 9 and 10 show the histograms for the moving range values and the subgroup range values. 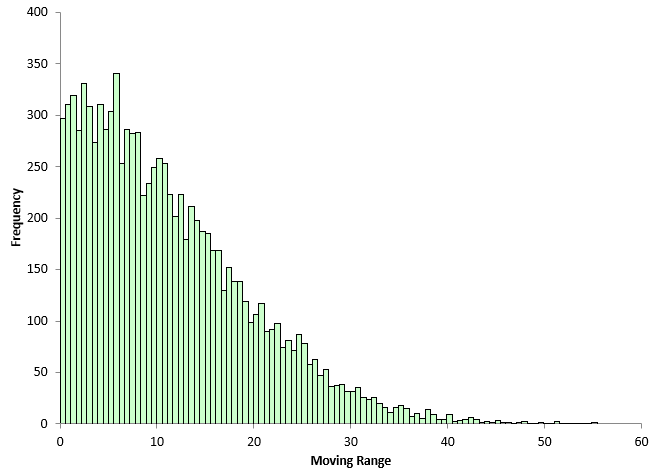 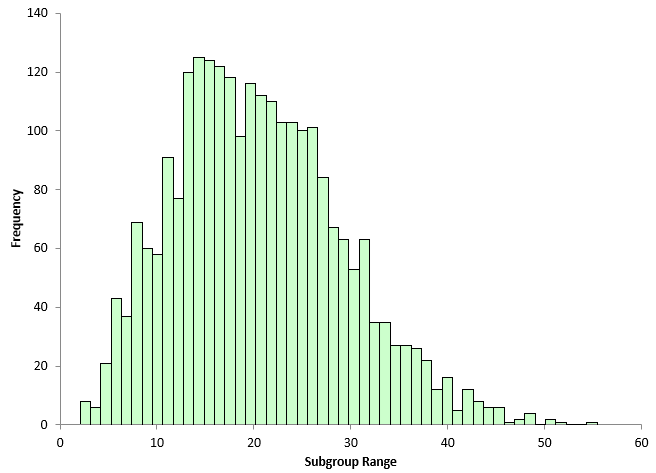 If you are faced with a situation where you can use the X-R chart or the X-mR chart, the X-R chart is probably the better choice. The subgrouping of data allows you to specifically look at the variation you are interested in monitoring. In addition, for the same amount of data, the X-R control chart gives less false signals than the X-mR chart.

This publication compared the differences in the X-mR and X-R charts in terms of the variation they monitor and in the number of false signals that can occur. In situations where either can be used, it is probably best to use the X-R control chart. You plot fewer points because you are subgrouping the data and this leads to fewer false signals.