Understanding variation is the key to successfully using control charts and quality improvement techniques. To effectively use SPC, you must understand the concept of variation, and, in particular, the difference between common and special causes of variation. This will be the sixth time we have visited variation over the past five years of newsletters.

We will focus on using the red bead experiment to demonstrate an in-depth understanding of variation. Have you been trained to use control charts? Did your instructor use the red bead experiment to demonstrate variation? If not, your instructor missed a great way of demonstrating what common and special causes are, how control charts separate the two, and what needs to be done to improve a process.

We will start this newsletter by talking about spilling milk, an example I have used several times in the past to introduce the concept of variation. My mother always used to get upset when I (or my siblings) spilled our milk. Did your mother get upset? Was it your fault?  Then, we will introduce common and special causes using the time it takes you to get to work.

Next we will introduce and describe the red bead experiment. We will include several links where you can purchase a bead bowl and supplies (Note: we have no affiliation with these companies). We will also provide a link where you can download a free red bead simulator that runs in

I used to, now and then, spill a glass of milk when I was young. Our table slanted towards where my mother sat. So, the milk always headed in her direction. And she usually had some choice words when this happened. Of course, I was at fault. I needed to be more careful. Or was that really true? If you understand variation, you will realize that most of the problems you face are not due to individual people, but to the process -- the way it was designed and the way it is managed daily.

Variation comes from two sources: common and special causes. Think about how long it takes you to get to work in the morning. Maybe it takes you 30 minutes on average. Some days it may take a little longer; some days a little shorter. But as long as you are within a certain range, you are not concerned. The range may be from 25 to 35 minutes. This variation represents common cause variation - it is the variation that is always present in the process. And this type of variation is consistent and predictable. You don't know how long it will take tomorrow to get to work, but you know that it will be between 25 and 35 minutes as long as the process remains the same.

Now, suppose you have a flat tire when driving to work. How long will it take you to get to work? Definitely longer than the 25 to 35 minutes in your "normal" variation. Maybe it takes you an hour longer. This is a special cause of variation. Something happened that was not supposed to happen. It is not part of the normal process. Special causes are not predictable and are sporadic in nature.

Why is it important to know the type of variation present in your process? Because the action you take to improve your process depends on the type of variation present. If special causes are present, you must find the cause of the problem and then eliminate it from ever coming back if possible. This is usually the responsibility of the person closest to the process. If only common causes are present, you must FUNDAMENTALLY change the process. The key word is 'fundamentally' -- a major change in the process is required to reduce common causes of variation. And management is responsible for changing the process.

It has been estimated that 85 to 94% of the problems a company faces are due to common causes; only 6 to 15% are due to special causes (that may or may not be people related). So, if you always blame problems on people, you will be wrong at least 85% of the time. It is the process most of the time that needs to be changed. Management must set up the system to allow the processes to be changed.

So, Mom, sorry. But most of the time, spilling the milk was not my fault. It was usually yours (management). The glasses were too big for my small hands (no spill-proof cups in those days). When I wanted to put it by the edge of the table to make it easier to reach, you said move it back because I might spill it. And with the meal-time conversation, how could I concentrate on my milk?

The most powerful method I know for developing an understanding of variation is the red bead experiment. Dr. W. Edwards Deming often referred to it as a stupid experiment that you'll never forget. I had the opportunity to see Dr. Deming perform this experiment in a seminar in 1984.

The experiment requires a sampling bowl that contains 80% white and 20% red beads -- hence the name "red bead experiment". You also need a mechanical sampling device such as a paddle containing 50 dimples to hold the beads. You could also use different colored beads as long they make up 20% of the population. Management has developed and purchased this "white bead" process for the working force. There is a major customer that needs white beads and will not accept anything less than 100% white beads. All red beads are considered to be defective. These red beads represent all the things that can go wrong with a process including a mechanical breakdown, a bad design, a poor procedure, an untrained worker, etc.

If you wish to purchase a bead bowl and supplies, below are two websites that sell them (we have no connection with these websites):

If you do not have a sampling bowl, you can use the red bead experiment simulator that runs in Excel. You can download it here. The file contains macros that must be enabled. You will also have to ensure that the Excel add-in Analysis Toolpak-VBA is installed. 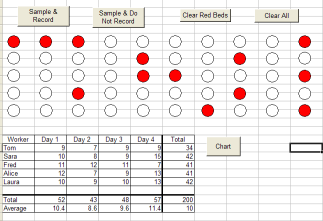 How to Perform the Red Bead Experiment

1. Start by telling the class the following:

2. Then let the class know you have some positions available:

3. You are now ready to train the workers by saying the following:

4. Instruct the inspector and recorder in their jobs.

5. Start the actual experiment following the order of the names listed on the data collection sheet. Note: for 20% red beads with a paddle with 50 indentations, the number of red beads that are drawn each time will be between 1 and 19. You want to have at least 16 to 24 samples so you can make the following points. What points you make will depend on the numbers that the experiment generates.

7. Cover the lessons learned from the red beads as explained in The New Economics by W. Edwards Deming

A Case Study in Variation

To really understand variation, many people have to change their paradigm. The following is a true story. A plant produced a number of different powdered products. Each of these products was run through the same production equipment at different conditions and put into unique silos (one or more for each product type).

To ensure that the product went to the correct silo, an operator had to set up the lines from the process to the correct silo. If product was introduced into the wrong silo, the entire silo had to be sold as off- grade, at a tremendous reduction in price. The cost was typically $30,000 per incident.

The plant leadership had a policy that anyone who cross-contaminated a silo received three days off with no pay. What type of variation did leadership assume was present? Special cause. They assumed that the operators were at fault. One manager said that he was not going to "idiot proof" the plant.

Was leadership correct? The only way to find out is to collect data.

It turns out that anyone who had worked in the unit for more than three months had time off for cross-contaminating a silo. If everyone is doing it, what type of variation is it? Common cause. And the only way to reduce common cause of variation is to change the process.

Leadership put together a team that worked on the problem. The team came up with two simple solutions: label the lines and put better lights out at night. Easy solutions but beyond the authority of the operators to get done by themselves. With the solutions implemented, the problem, which had been occurring almost monthly, went away entirely. So simple if you understand variation.