On January 18, 2018, NASA published the following on their website:

“Earth’s global surface temperatures in 2017 ranked as the second warmest since 1880, according to an analysis by NASA.

Continuing the planet's long-term warming trend, globally averaged temperatures in 2017 were 1.62 degrees Fahrenheit (0.90 degrees Celsius) warmer than the 1951 to 1980 mean, according to scientists at NASA’s Goddard Institute for Space Studies (GISS) in New York. That is second only to global temperatures in 2016.”

The good news in this was that 2017 was cooler than 2016.  The bad news was it is still the second warmest year since 1880, behind 2016.  So, are we getting cooler?  Probably not.  One data point does not make a trend.  Over the past few years, we have examined global temperature data.  We began our look at this back in December 2015 by looking at global temperature changes over time using a control chart.

You may download a pdf version of this publication at this link.  Please feel free to leave a comment at the end of the newsletter

We have three previous publications on using control charts to analyze global temperature.  These are briefly described below.  The data used in all our publications so far were downloaded from the Goddard Institute for Space Studies (GISS) website at this link.  GISS is part of the National Aeronautics and Space Administration (NASA).  The data are now given as a deviation from the baseline period from 1951 – 1980.  For example, the temperature deviation for 2017 is 0.9 °C.  This means that 2017 was 0.9 °C higher than the baseline mean from 1951 to 1980.

The Historical Data Changes Over Time

In our last publication, I assumed that I would simply take the temperature deviation for 2016 and add it to my dataset and update the control chart to see how 2016 played out.  I decided to re-download the data and was surprised to see that the data changed somewhat.  I contacted the person who oversees the data and he explained some reasons why the data changes over time.  Those reasons are in the last publication.

This year, I decided to take a closer look at how the historical data changed from February 2017 to March 2018, when I download the data for the last and this publication.  The changes are small – usually .01 to .03.  So, the changes are not really that significant in the analysis of the data.  However, I always have a little concern when historical data changes. Here is a link to the data used in this publication

Figure 1 shows the change in data that was downloaded in March 2018 to that downloaded in February 2017 from the website for 1997 to 2016.  The changes appear to have slightly reduced the global temperatures for each year since 1997 except for the last two that saw a slight increase.  But again, the differences do not impact the analysis overall. 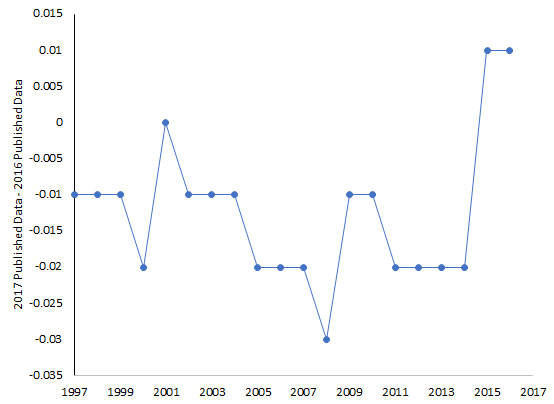 Figure 2 is a plot the global temperature deviation as run chart over time from 1880 to 2017 using the current data as deviations in °C from the baseline period. 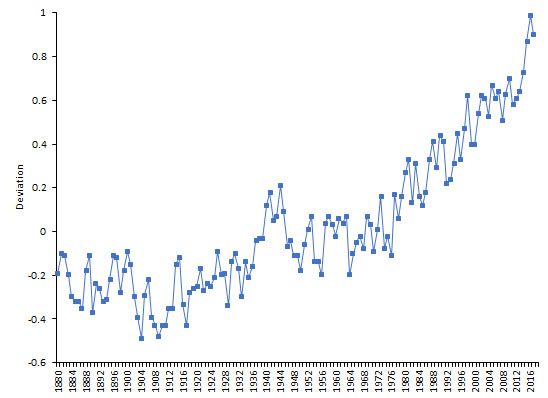 As discussed in previous publications, there are periods of “constant” temperature that is followed by a step change upward through most of the chart.  Figure 1 shows the decrease in global temperature for 2017.  But there does appear to be the same general trend upward. 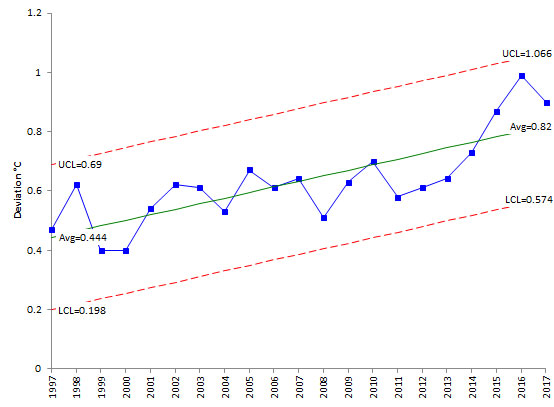 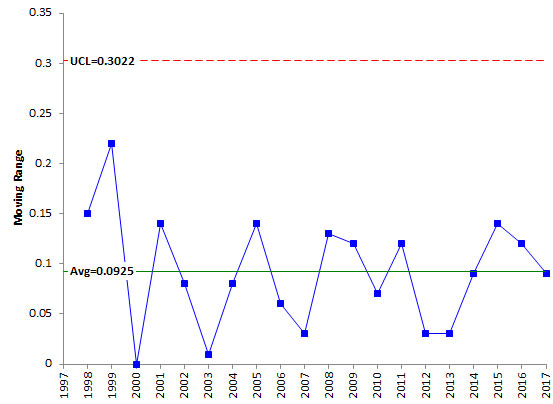 The best fit line for the global temperature deviations from 1997 to 2017 is given by:

The differences with the control limits in Figure 3 are simply due to rounding.  You can now use the trend control chart to predict, within a range, what the deviation in the global temperature will be for this year (2018).

This “model” predicts that the 2018 results would be 0.849 and in between 0.594 and 1.086.  Remember that the control limits are set at +/- three standard deviations, so there is a “wide”” range of possible results.  But it does appear that the global temperature continues to be in an upward trend.

This month’s publication updated our three previous publications on global warming.  The trend continues to be upward in terms of global temperature since 1997.  The predicted temperature rise for this year is 0.849.  Stay cool!