(Note: all the previous publications in the process capability category are listed on the right-hand side. Select "Return to Categories" to go to the page with all publications sorted by category. Select this link for information on the SPC for Excel software. SPC for Excel does perform Poisson Capability Analysis.)

You have a process that produces defects from time to time. A defect does not mean that the item containing the defect is defective. It is possible for an item to have more than one defect and still be good. For example, suppose you are producing plastic film. Every now and then, the plastic film has a blemish – a defect. Your test involves examining a given area of the film and counting the number of blemishes in that area. What is this plastic film process capable of producing?

Please feel free to leave a comment at the end of the publication.  Aslo, you may download a pdf copy of this publication at this link.

Sometimes rating items as defective or not defective is not especially useful, particularly if the item is continuous, like our example of the plastic film. The fact that the sheet has a small defect, such as a blemish on it, does not make it defective. However, if there are too many blemishes, the plastic film may not be useful for its intended purpose.

A defect occurs when something does not meet a preset specification. Again, it does not mean that the item itself is defective. When looking at counting data, you have whole numbers such as 0, 1, 2, 3; you cannot have half of a defect. With the plastic film example, you will have 1 blemish, 2 blemishes, etc.

Assumptions to Use the Distribution

There are four conditions that must be met to use the Poisson distribution. These are listed in Advanced Topics in Statistical Process Control (Dr. Wheeler, www.spcpress.com) as follows:

If these conditions are met, then the Poisson distribution can be used to model the process.

The specification for the plastic film is 0.8 or less blemishes per cm2 area. We will use the Poisson Process Capability technique to answer the question of how capable the process is.

Definition of the Poisson Process Capability

The definition of the Poisson Process Capability is simple. It is the average defects per unit (DPU) over time. Straightforward and simple. Well, almost.

"Is this a good average for the process?"

So, a better definition of Poisson Process Capability is the average defects per unit over time that is valid. To be a valid average, the answer to the following three questions must be yes:

Below we show how to answer these questions.

The Issue of Stability: The u Control Chart

The average and control limits (based on the Poisson distribution) are then calculated and plotted on the u control chart. If there are no points beyond the control limits or patterns, the process is said to be in statistical control. If a process is in statistical control, there are only common causes of variation present and no special causes present. Figure 1 is the u control chart for the number of blemishes. The dotted line is the upper control limit.

Figure 1: u Control Chart for Blemishes 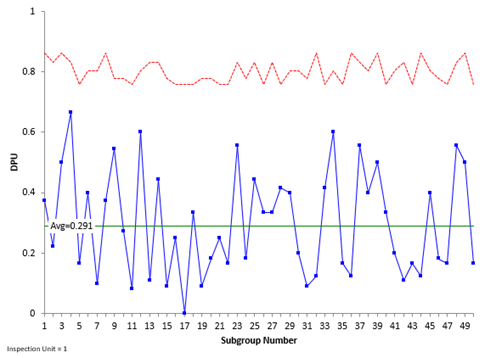 There are no points beyond the control limits and no patterns in the data. The process is in statistical control.

The Issue of Enough Data: The Cumulative Defects per Unit Chart

Your control chart needs to have enough data to be sure that the average is valid. For example, you may have an in-control process after five data points. Would you be comfortable that these five data points would give you a valid average for the process? They might, but probably they are going to be off from the true average. The cumulative DPU chart addresses this issue. 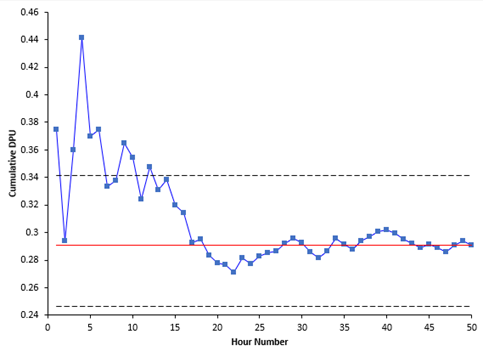 You want the cumulative DPU average to flatten out along u. It should cross the centerline several times as it flattens out. If this occurs, you have enough samples. This does occur in this example, so you have enough data. The answer to the second question above is yes.

The Issue of Following a Poisson Distribution

This chart plots the DPU for each sample versus the sample size. The chart is shown in Figure 3. 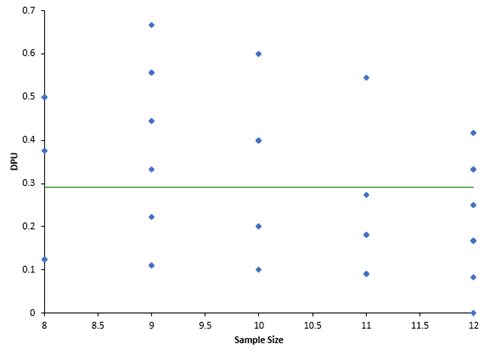 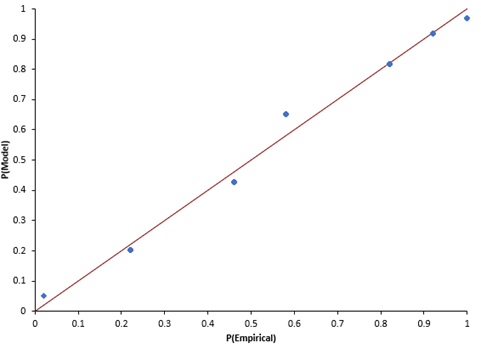 The points fall about the straight line so you can assume that the data comes from a Poisson distribution.

The histogram can be used to see what the distribution of DPU values looks like as shown in Figure 5. 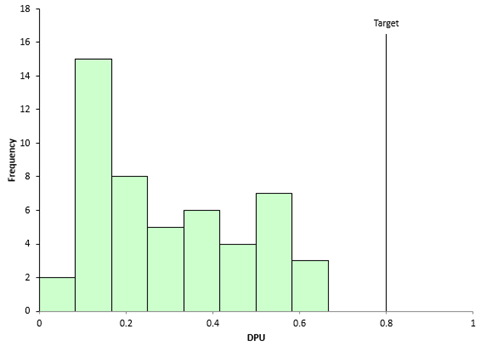 Does this look like a Poisson distribution? It is hard to tell sometimes when looking at DPU. But it does show you the distribution of values and the relationship of the DPU values to the target or specification. All samples have met the target – and since the process is in statistical control, it should continue to meet the target into the future.

This publication examined Poisson Process Capability. This is the average defects per unit as long as the four criteria for using a Poisson distribution are satisfied and the answers to the following three questions are yes: