Creating Cause and Effect Diagrams

Introduction to Cause and Effect Diagrams

The causes are most commonly categorized as machines, methods, environment, materials, measurement, and people (the 4 M's, a P and an E). This is particularly true for manufacturing applications. You can pick your own categories.

The cause and effect diagram is one of many root cause analysis tools. Root cause analysis should be thorough enough to "root" out the deep and hidden causes that are often missed with quick fixes to problems. It provides a method of taking all the jumbled-up ideas we have and arranging them so we can use a systematic approach to improvement.

Cause and Effect Diagrams Organize

Creating a Cause and Effect Diagram

An example of a cause and effect diagram on reasons for downtime is shown in the figure above. The steps to create this diagram are given below.

2. Write the problem or goal (effect) on the right hand side of a large sheet of paper taped to the wall and draw a horizontal line to the left.

3. Select the categories for the causes of the problem or for what needs to be done to reach the goal. These categories will be the main factors of the cause and effect diagram. Each main factor forms a branch off the horizontal line.

5. Always try to branch further by continuously asking, "What causes variation in this branch?" In this way, you can add to the cause and effect diagram until it fully shows all the possible causes of variation.

A summary of the general rules for constructing a cause and effect diagram is given below. 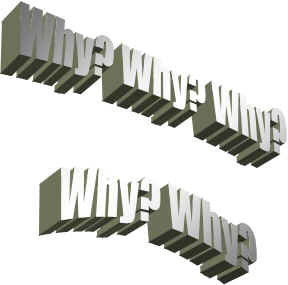 Another useful tool to use in conjunction with cause and effect diagrams is called the 5 Whys. This technique involves asking "Why?" five times to help get to the root cause. An example of the 5 Whys is given below.

The process of continually asking "why?" helps drill down to the root cause. It also helps fill out the branches on a cause and effect diagram.