This month's newsletter examines Box and Whisker plots. A Box and Whisker plot provides a quick method of examining the variation in a process, determining if outliers are present in the data, and comparing processes. Instead of plotting the actual values, it plots a summary of the distribution.

A Box and Whisker plot is a picture of how a set of data is spread out and how much variation there is. It is sometimes called a boxplot. It does not show all the data. Instead, it highlights a few of the important features in the data. These important features are the median, the upper (75th) quartile, the highest value, the lower (25th) quartile and the smallest value. Box and Whisker plots are ideal for comparing multiple processes because the center, the spread and overall range are immediately apparent from the chart. A diagram of a Box and Whisker plot is shown below.

Constructing a Box and Whisker Chart

Suppose we have the set of data below. It is arranged from the minimum value to the maximum value.

We will use the method developed by Emil Gumbel for determining quartiles. This is also the method used by Excel. The first quartile is the kth observation when the data is arranged in ascending order and k = (n+3)/4. n is the number of data points. Linear interpolation is used if k is not an integer. In this example, there are 15 data points. Thus for Q1:

This means that Q3 lies between the eleventh and twelfth data points. These two data points are 105 and 107. So, Q3 is 106. The Box and Whisker chart now be drawn. The chart is shown in the figure above.

This box and whisker plot provides a 5 point summary of the data. These are:

Note: the Quartile function in Excel can be used to find Q1 and Q3.  The earlier versions of the SPC for Excel software did this; later versions use the calculations at this link.

The resulting Box and Whisker plot for these data is shown below. 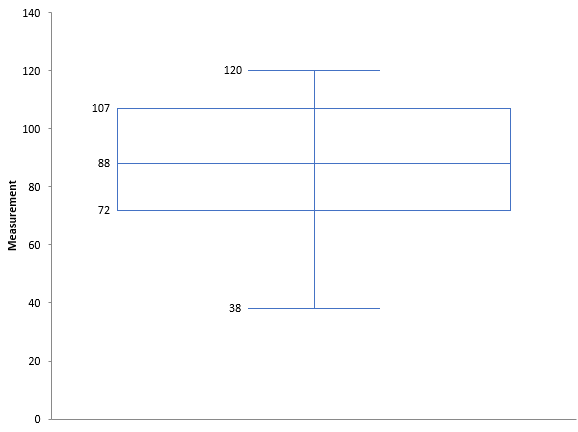 You can use a Box and Whisker plot to compare the variation and medians in multiple processes. For example, the data below shows the average monthly temperature in three cities.

You can make a Box and Whisker chart for each of these cities as was done in the chart above. It is easy to see that New York City has more variation in temperature than the other two cities. San Francisco has the least variation. Houston is the hottest on average; New York City the coldest, though it does get hotter at times than San Francisco.

The Box and Whisker charts are a great tool for a quick look at how several processes compare.

Box and Whisker charts can also be used to identify outliers. Let's return to our original data set.

Suppose we add one more value to that data set: 220. Then we make a Box and Whisker plot based on that data. The chart is shown below.

The outlier is easily seen. 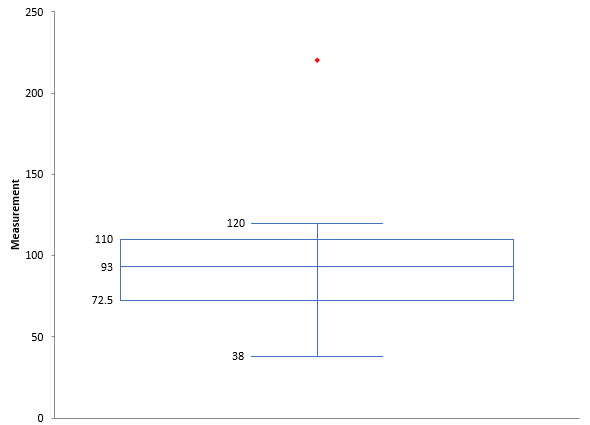 The Box and Whisker plot provides a lot of information despite being a simple tool. The length of the box provides an indication of the spread or variation in your data.