A rather odd combination in the title, wouldn’t you say? What on earth does horse racing have to do with listening to control charts?  Let’s start with the horse racing.  You might know that there was a Triple Crown winner this year in horse racing – something that had not happened for the past 35 years.  The horse’s name is American Pharoah.

What is the probability of a horse beating Secretariat’s record?

The statistical analysis in this series of posts included a control chart, normal probability plots, Johnson transformations, Box-Cox plots, the two sample t-test, the Mood Median test, and several process capability analyses.  A lot of statistical techniques for sure – and some pretty advanced ones.

The series of posts started because an earlier post had an error in it (a transformation was not done).  “Stats gone wrong” was a phrase used and the series of posts explained what had happened and then re-analyzed the data with the techniques listed above.  The author is to be commended for admitting a mistake and trying to address what should have happened.

But in reality, the stats had not gone wrong.  What went wrong is something we all do too often.  We don’t “listen” to what the control chart is telling us.  If we did, we would sometimes discover that we shouldn’t be using all those fancy statistical techniques.

Control charts are central to understanding variation – and for allowing a process to communicate with you.  We all know how important communication is.  Lack of communication almost always is detrimental.  One way to think about a control chart is that it is the way your process communicates with you.  If you listen to the control chart, it will usually guide you down the right path.

So, this month’s publication takes a look at horse racing and shows how, if you listen to your control chart, it will usually guide you down the correct path.  Don’t listen and you most likely will be wondering what went wrong.

You can download a pdf copy of this publication at this link.  Please feel free to leave a comment at the end of the publication.

The Triple Crown of horseracing consists of these three races for three-year-old Thoroughbred horses:

In 1973, Secretariat won the Triple Crown.  In addition, he set records in all three races - records that still stand today and give credence to him being the best Thoroughbred horse ever.  Secretariat is the “standard” or “specification” we will use our analysis.

The three-part post appears on Quality Digest’s website.  The link to the first post is here.  The approach was to start with a control chart on the Belmont Stakes winning times – just exactly where you should start.  Then a normal probability plot was used to determine if the data were normally distributed.

If the data are normally distributed, a process capability analysis (Cpk) using Secretariat’s winning time as the lower specification limit could be done.  This would allow you to determine the probability of a horse having a lower winning time than Secretariat.

If the data were not normally distributed, you would have to either find a distribution to fit the data or transform the data to a normal distribution.  Then you can do the process capability analysis.

There is nothing wrong with this approach.  It is what you should do in this analysis.  You can look at the link above to see how the analysis unfolded.  There was a problem with the rounding of the data to start with – and this causes some problems in the analysis. Excessive rounding contributed to the data not appearing to be normally distributed.  Data without excessive rounding was used in the third post.  The issue though was that the control chart does not appear to have been used when the data were re-analyzed.  You can’t listen to a control chart if it is not there. 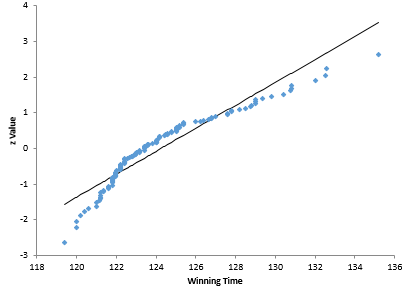 It is easy to see that the winning times do not lie along the straight line.  The p-value for this normal probability plot is less than 0.05.  So, it was concluded that the data are not normally distributed.  This led to using the Johnson transformation to make the data “normal.

A step appears to be missing - and that step is listening to your control chart.  The first step of any analysis like this should be to take a look at the data over time in control chart format.   Figure 2 is an individuals control chart for the Kentucky Derby data. 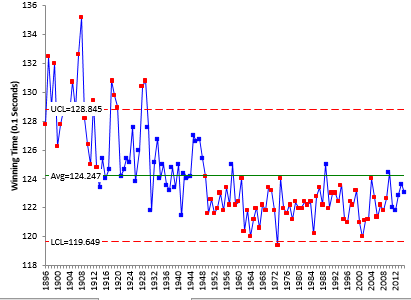 Listen to the control chart.  What is it telling you?  It appears that we have some longer times early in the chart, a little lower times in the middle and even lower times toward the last half of the chart.  The main thing the control chart is telling you is that the process from 1896 to 2015 is not stable.  The data are not homogenous – they do not come from one system.

Does it make sense to perform a normal probability plot on data that are not homogenous?  Would you combine the data from the Kentucky Derby (1.25 miles in length) and the Belmont Stakes (1.5 miles in length) and do a normal probability plot?  You would say of course not.  Those are two separate processes – one is a shorter race with shorter times.  But this is what the control chart in Figure 2 is trying to tell you – the data are not homogenous – there is more than one process in play here. 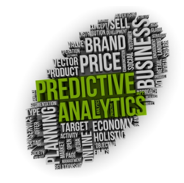 “Analysis of variance, t-test, confidence intervals, and other statistical techniques taught in the books, however interesting, are inappropriate because they provide no basis for prediction and because they bury the information contained in the order of production.”

To be able to predict something, you need to start from a database that is homogenous – i.e., a process that is in statistical control.  There may be small issues, like runs, but the idea is to get as close you can to one system based on what the control chart is telling you.    If the control chart does not show some degree of statistical control, you have no confidence that the process will stay the same in the future.  You can’t predict future performance because the past has not been predictable.

If you look at Figure 2, things appear to be pretty stable since about 1950.  You can check this by constructing a control chart based on the data from 1950 on as shown in Figure 3. 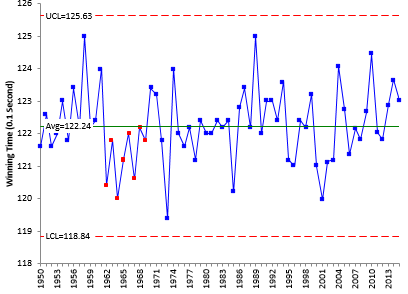 This data looks pretty homogenous.  One run below the average, but it looks a lot more homogeneous than Figure 2.   Note that Secretariat’s winning time in 1973 is not below the lower control limit.  Now you can ask if the data are normally distributed.  Figure 4 is a normal probability plot for the data since 1950. 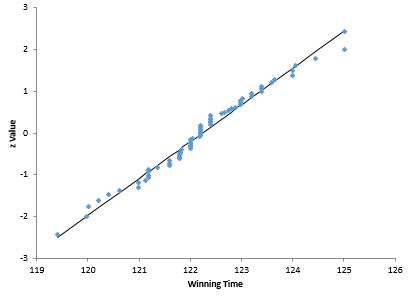 This normal probability plot looks a lot different than the one in Figure 1.  The data now falls close to the straight line.  The p value is 0.19.  You can conclude that the data are normally distributed.  No need to do any data transformation. 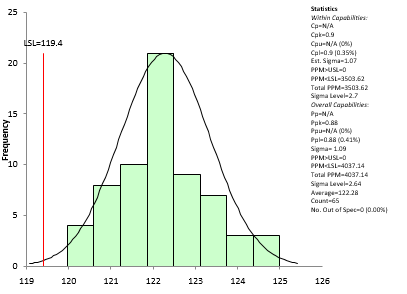 The Cpl value in this case is 0.9, which corresponds to a 0.35% chance of a horse beating Secretariat’s time.  The post, using all the data and the Johnson transformation got a value of 0.32%.  Pretty close.  How come?  Just lucky I would think.  There is not a single distribution present with all the data.

The Belmont Stakes has been 1.5 miles in length since 1926.  We will use the same approach as above and start with listening to the control chart as shown in Figure 6. 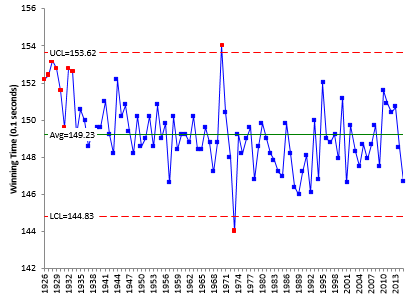 There are two points beyond the control limits.

How do we handle these two out of control points?  One of these is the result for Secretariat.  Again, if the objective is to determine the probability of a horse beating Secretariat’s time, we probably should not include Secretariat in the data (just like we did in the Kentucky Derby analysis).   In addition, there probably was a reason for High Echelon’s 1970 time of 154 seconds (maybe weather?).    So, let’s remove those two points from the control chart calculations.

You can now do the process capability analysis using the data from 1937 on excluding 1970 and 1973.  The results are shown in Figure 8. 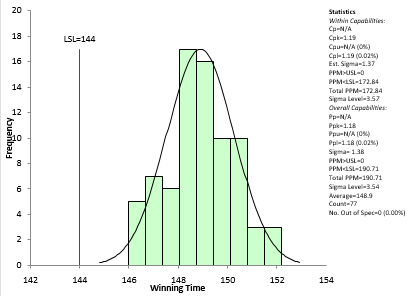 Cpl for this analysis is 1.19, which means that there is a 0.02% probability that a horse will generate a time less than Secretariat’s time of 144.   Pretty small odds of someone beating Secretariat’s record time.

We will let you analyze the Preakness results that are in the workbook you can download.  Try it out.  What is the control chart telling you? The data are homogenous from 1966 on.  Secretariat’s time was not out of control.  American Pharoah’s winning time this year is actually an out of control point on the high side.  The track was very wet – making this year a special cause.  The process capability analysis returned a Cpl of 0.86, which means that there is 0.49% chance of a horse beating Secretariat’s time.

Secretariat is, no doubt, the greatest race horse there has ever been.  The table shows the results of this analysis.  Just not much chance of a horse beating his record times.

The table also implies that the longer the race, the less probability of a horse beating Secretariat’s time.  In fact, if you plot the % probability versus the length, it is just about a straight line.  Interesting.

With analytic studies, simply applying statistical tests to a set of data may or may not be valid.  You have to let the control chart give you that answer.  The past matters when trying to predict the future – and what matters the most is the information contained in variation from the past.  Unless you have a process that is stable, you can make no predictions about the future.

So, start with variation.  Plot the data over time – and then listen to what the control chart is telling you!