Variation, People, and Pay for Performance

When we talk about statistical process control (SPC), we usually do so in terms of manufacturing of products. Of course, some of you have taken SPC to the service industries as well. But even then, it is usually in the context of how to apply control charts in the environment. Sometimes we forget that SPC is based on the profound body of knowledge Dr. W. Edwards Deming called variation. And variation is a mindset - it is about how you approach any issue. And one place we seldom seem to use our knowledge of variation is in designing pay systems - particularly pay for performance systems.

Much has been written over the years about motivation and pay. Many different compensation systems - e.g., bonuses, stock options, gain sharing - have been developed to "help" drive an organization's results. This month's newsletter takes a look at pay for performance systems and how the concept of variation is, more often than not, simply ignored.

Please feel free to leave a comment at the end of the newsletter.

Suppose you work in a factory. Your job is to run a production cell that makes tools. Your pay and benefits are about average for this type of position in the area. A lean project developed the production cell a few years ago. Management wants continuous process improvement in your cell. And they have some concerns about the amount of scrap produced. Management reviewed the data from last year, which is shown below in Table 1. They believe it is increasing over time and want to reverse that trend.

What are management's basic assumptions in setting up this type of system? These are really the same assumptions that management has for the most common example of pay for performance: sales commissions. These assumptions are:

Unfortunately, these assumptions are often not valid. And management has ignored variation and the lessons from the red beads (remember the red beads? See this link for more information on the red bead experiment). We have written quite a few newsletter articles on variation. If you are new to this concept, you might want to start with this newsletter.

Let's take a look at the four assumptions above.

All People Are Motivated by Money

Everything varies - the core concept of variation. So what motivates people varies too. Naturally, some people are more motivated than others by money. But incentive systems assume all people are motivated by money. Under this assumption, it is easy to build a compensation system. Pay people to do what you want them to.

Of course, people are interested in money. They want to be paid fairly for the work they do. But for people with satisfactory salaries, numerous studies have shown that the non-financial motivators are much more effective in motivating employees. There is a lot of data that show what motivates people most are the intangible things -- interesting work, being creative, praise from management, etc. Often, financial reward systems give bursts of energy that result in short-term improvement with long-term negative impacts on the business.

Seldom do people change jobs for increases in pay. People normally change due to the lack of things on the job that make it challenging and rewarding. Dr. W. Edwards Deming said it over and over -- money is not a motivator, it will not bring "joy on the job."

Of course, the less money we make, the more concerned we are about money. We need to be able to buy the things we need to survive. So, one could assume that the "lower" a person is in the organization, the more concern about money he or she will have. Again, however, this not the primary source of motivation for the vast majority of the people.

Money is a motivator for everyone? We know it is not true yet we want to set up systems based on that incorrect assumption. I think Dee Hock, the man who built Visa, said it very well:

"Money motivates neither the best people, nor the best in people. It can move the body and influence the mind, but it cannot touch the heart or move the spirit; that is reserved for belief, principle and morality. As Napoleon observed, "No amount of money will induce someone to lay down their lives, but they will gladly do so for a bit of yellow ribbon."

OK. So maybe money is not a big motivator to everyone. But can't we design an incentive system to get people, particularly those who are lower in the organization, to do what we want them to. So, is it different with people who are "low" in the organization? What about you in your production cell? Will you work harder if we put a "carrot" out there? The following appears to be what management thinks:

Hmm, kind of makes sense, right? After all, they aren't compensated like salespeople or managers, for example. They would like more money, pay off some of their bills. Plus, we can set up the system to get them to focus on what we want them to do - less scrap, more tools, and more uptime. Pay them more, either individually or as a team, when they reach the goal. Let's reward them when they do good work.

Sounds great, but the reasoning continues to be flawed by the underlying assumptions. Alfie Kohn is the author of a book called Punished by Rewards: The Trouble with Gold Starts, Incentive Plans, A's, Praise and Other Bribes. Mr. Kohn takes a different viewpoint on the use of rewards in school, at home and at work. He believes that rewards and punishment are not opposites at all but are "two sides of the same coin." Both are aimed at controlling behavior. There are five major reasons rewards often fail to give the anticipated result.

Can this be true? Unfortunately yes. Rewards are aimed at controlling someone's behavior. If you do this, I will give you something you like. While the reward may be pleasurable, people do not like to be controlled. In addition, we may not get all the reward we think we are due. In this case, the reward becomes a punisher. "Rewards feel punitive because they too amount to an effort to manipulate people's behavior. Moreover, employees may find a bonus or other incentive deliberately withheld or withdrawn from them, or else they may simply fail to obtain it despite their best efforts."  Remember the red beads?  It was impossible to get all white beads - people failed despite their best efforts.

Individual rewards will definitely rupture relationships that exist. It will foster competition, not cooperation. There is only one best -- everyone else is a loser. A sure fire way to destroy teamwork is to make the people compete against each other for a bonus. In addition, it likely to change the relationship between supervisor and employee. If the supervisor determines the bonus, the employee may not tell him/her certain things. Teamwork once again fails.

This is a big one in my opinion. To improve, we must know what causes problems. The use of rewards, even those tied to process improvement, tend to hinder the search for real reasons of problems. In fact, this reward process allows management to ignore their true job of coaching and helping. The assumption is that if we pay them enough, the job will get done. Then we don't have to lead them -- simply offer the carrot.

People will do what it takes to the get reward, but only what it takes. Having a sliding scale does not change that. In addition, people will not take any risks that could affect the reward.

This is the biggest issue here. Intrinsic motivators are more powerful than extrinsic. However, "extrinsic motivators not only are less effective than intrinsic motivation, but actually reduce intrinsic motivation." In other words, rewards, like incentives, can hurt the person's motivation for doing the activity. The focus changes from the activity to the reward.  I am reminded of the story of the boy who began helping his mother do dishes each night.  He loved to help her.  One night, she told him how much she appreciated his help and gave him a quarter.  The next night, the mother started to wash the dishes.  Her son sat at the table.  She asked why he wasn't helping.  His answer: where is my quarter?

OK, so money is not a big motivator and it may be difficult to set up an incentive system that doesn't ultimately demotivate people. But, let's do it anyway. How can we design a system to pay people for the work done -- either individually or as a team?

Suppose Z is 1000 tools produced. What is your contribution to that? The equation above cannot be solved for a unique value of X or Y. It is impossible to separate the two.

So people might say that is not a big deal. Just forget about the system's input. Ever know somebody who did a poor job in one department, then was moved to another and became a great performer? Of course, we all do. The person was the same in this case. Why the difference? The system of course. Maybe it was supervision. What does supervision add to the process?

People Have Control of the System

People do not have control of the system. This is one point that Dr. Deming often spoke of - people work in the system; management works on the system. Once a process is in statistical control, the workers are doing the best they can. Only common causes of variation are present. The only way to improve the process is to fundamentally change the process. This is management's responsibility - even though the workers may have great ideas on what needs to be done. They just don't have the authority to make those changes.

The control chart on the scrap data is shown below. The process is in statistical control. You are doing all you can on scrap. You will hit the first level for the bonus of .77 about half the time. You may also hit the second level of bonus of 0.65 a couple of times during the year. All with the current process. 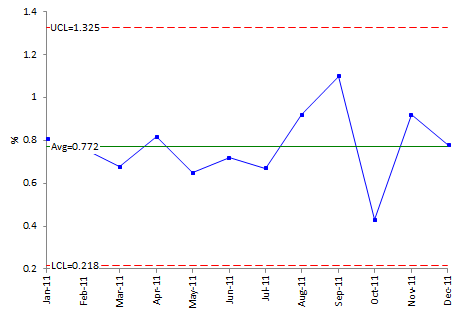 The process has to be fundamentally changed for real improvement to occur. Of course, one way to reduce scrap is to distort the data - simply not scrap tools that need to be scrapped. You wouldn't do that, would you? Just for a few extra dollars? Not quite what management had in mind, is it?

Intrinsic motivation is a far better motivator than rewards such as bonuses and incentives. The key is to make the work the motivator and try to keep the pay from being a demotivator.

Basically, the pay system should be fairly simple. Brian Joiner suggests a simple system in his book Fourth Generation Management. Pay a salary that is in line with the market for the job. You don't want to be below the average, but not too far above it either. This is fair to people. They know you are paying them about what they could make elsewhere. They will not leave due to pay issues if this is the case.

Give the same percentage salary increase to all employees once a year. The increase is to keep people's salaries in line with the market and is not related to how the company is doing.

Some people may require some special adjustments to salary, but the above simple system is fair and people will sense that it is fair to everyone involved - one that takes into account that we are all part of the same system.