I use control charts whenever I want to look at data over time - if a metric is increasing, decreasing or staying the same. At work, for example, I track our software sales and website visits using a control chart. Doing this allows me to determine when something has significantly improved or decreased. It helps me when there are down months to determine if those months are simply part of the normal variation in the process (and I shouldn't be too stressed out). The same is true for the up months as well (and that I shouldn't plan on that extra income each month just due to normal variation).

A little less serious topic this month as you may have discerned already. I am a baseball fan. I grew up in Ponca City, Oklahoma listening to the St. Louis Cardinals on WBBZ radio in the early 1960s. Yes, I am that old. My Cardinals won the World Series this year - a very exciting series. Albert Pujols is the first baseman for the Cardinals. He has been with the Cardinals his entire major league career. He is probably the best baseball player in the world today. He is also a free agent this year. This means he can sign with any team that he wants to, so the Cardinals might lose him. And he is looking for a long-term contract and probably would like to be the best paid player in the game. This past season, Pujols made $16 million.

Which brings in Alex Rodriguez. In December 2007, he signed a $275 million, 10-year agreement with the New York Yankees. Wow! This past season, he made about $31 million, about twice as much as Pujols. And he still has six years left on the contract although his salary drops to a paltry $20 million by the last year of his contract.

So, this month, it is Albert Pujols versus Alex Rodriguez. We will answer the following questions using data:

Let the fun begin!  Your comments are welcomed below.  Our Quick Links are also listed below.

The Triple Crown of Baseball

Three key statistics for baseball players are batting average (BA), home runs (HR) and runs batted in (RBI). If you are the leader in all three at the end of the season, you are the "triple crown" winner. Carl Yastrzemski was the last person to do this - back in 1967 for the Boston. While there are many other statistics, we will focus on these three in this newsletter.

Pujols' statistics for his first 11 years in the majors are given in the table below for homers (HR), runs batted in (RBI) and batting average (BA).  All data is from www.mlb.com.

This past year was a low for Pujols in runs batted in and batting average. He did miss some games due to injury, but that has happened in the past a few times. So, is Pujols' productivity on a decline? The best way to see this is through the use of control charts. The three control charts for Pujols are shown below with the control limits based on 2001 to 2010.  We use the individuals (X-mR) control chart in this newsletter, although we just show the X chart. 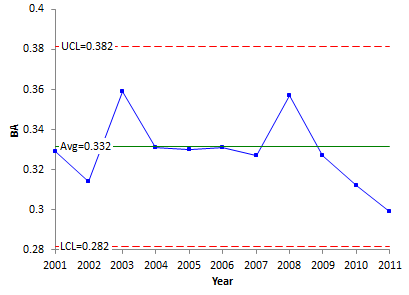 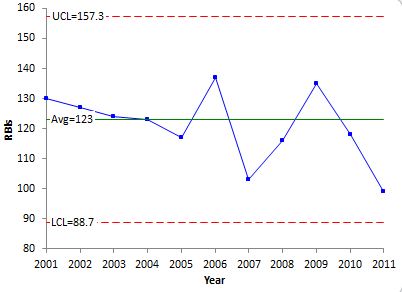 This control chart tells a very similar story to the batting average. His runs batted in for 2011 were the lowest of his career but still within the control limits. His runs batted in are "in control." You can expect him to drive in anywhere from 88 to 157 runs with an average of 123. 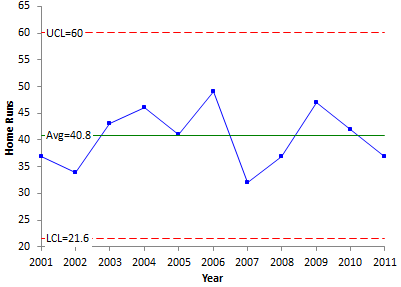 So, Pujols appears pretty much "in control." His productivity is not declining. Now, on to Rodriguez.

Rodriguez has been around since 1994 in the majors, but he didn't play much during those first two years. His statistics from 1996 are shown in the table below.

Rodriguez missed quite a few games in 2011 which impacted his statistics for home runs and runs batted in. The control charts for Rodriguez are given below. The time frame from 1996 to 2005 (first ten full years) were used to set the control limits. 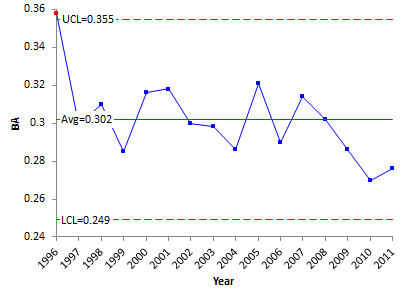 Interesting that in his first full season, Rodriguez hit .358 - out of control on the high side. A special cause of variation! Interesting to guess what caused it to be so high. Any ideas? He has not been close to that average again. Four of his last five years are in a downward trend. But not a signal on the control chart. 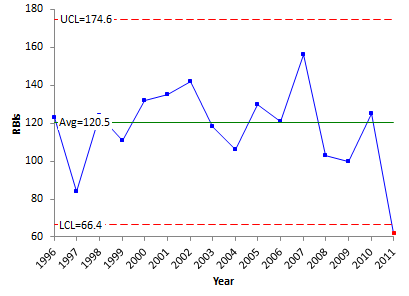 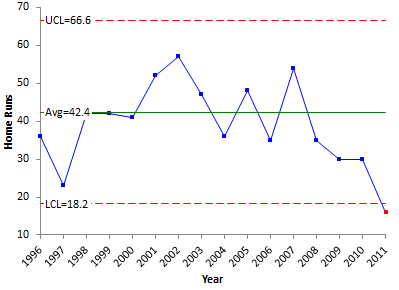 So, Who is Better?

The table below compares the averages from the control charts. Pujols has an edge in batting average and RBIs while Rodriguez has an edge in home runs.

Table 3: Comparison of Averages from Control Charts (Based on 10 Years)

But remember, these averages were based on the first ten years for Pujols and the ten of the first twelve for Rodriguez. One problem is the presence of those special causes - in particular injuries. When a player misses a lot of games, he has fewer opportunities to hit home runs or drive in runs. So, how can we handle this issue?

One method is to look at how many times a player bats before driving in a run or hitting a home run. To calculate this, we simply divide the number of at bats by the runs batted in or by the home runs. The data for both players are given below.

Table 4: Pujols At Bat per Home Run and RBI

Table 5: Rodriguez At Bat per Home Run and RBI

If they both bat 550 times in a typical season, the "expected" home runs and RBIs for each player are given in the table below.

Not much difference that I can see in terms of home runs and RBIs. But Pujols does get the edge on batting average. So, I have to go with Pujols.

Control charts can and should be used whenever you want to look at how data behaves over time.   You can use control charts just about everywhere.  This baseball example demonstrates that by using individual control charts to monitor player performance over time.  Hope you enjoyed it.