How many different approaches do you think there would be?  Ten?  Six?  Five?  All taking the same approach?  What would your approach be?  You don’t need to see the data set to determine what approach to use.  This month’s newsletter discusses an approach to use - an approach that is simple to use but will allow you to interpret data effectively and efficiently.    The approach includes the four lessons of interpreting data presented by Dr. Don Wheeler in his great book Understanding Variation.  We will use a few data sets from the aviation industry to demonstrate this approach to making sense of data – one that so few uses.  Of course, this approach is based on statistical process control (SPC) and control charts.

The Federal Aviation Administration (FAA) and other groups have pages and pages of data related to the airlines and airports – almost always in tables with maybe a pie chart thrown in there somewhere.  Tables and tables of data.  Consider the following questions:

Of course, these questions apply to all industries.  In his great book, Understanding Variation, Dr. Don Wheeler lays out some lessons about data analysis. This month we apply those lessons to the data from the FAA.  We will look at the following data from the FAA and other sources:

The Lessons of Dr. Wheeler

1.     Data have not meaning apart from their context.

This means that you can’t just present a table of numbers.  People looking at the data would have no idea where it came from or how it was collected.  Dr. Wheeler refers back to Dr. Walter Shewhart, the father of SPC, in this principle.  He paraphrases Dr. Shewhart’s two rules for presentation of data:

So, what does this mean?  It means quit presenting data just in tables.  Use a chart to accompany the table.   The charts could be a control chart (time series) chart, a histogram or a Pareto diagram.  The charts provide a visual picture of the data in the table.

Shewhart’s second statement involves averages, ranges, and histograms.  The problem with using these types of techniques is that the time-orderness of the data is lost.  A histogram can show a nice symmetrical curve that can be characterized by an average and a range.  But a control chart of the same data could show a steadily decreasing process – something that cannot be seen with a histogram.  The key point here is that you should be examining data over time to ensure that the context of the data is known.  That means, in most cases, it would be wise to include a time series with a histogram, an average or a range.

2.    Before you can interpret data, you must have a method of analysis.

This is the key to interpreting data.  You must have a method of analysis – and, if we all use the same method, we will generally reach the same conclusions.  The method most commonly used by companies today is to compare a result to a specification (if the product is in spec, ship it!), to a target or goal (we reached our sales budget this month, yes!), or to performance in the past (this month’s sales is less than this month last year, oh no!).  Sometimes we compare a result to an average.  Yes – we are above average!  No – we are below average!  All these approaches ignore the concept of variation and how the process is actually performing.

Control charts separate the noise (common causes) from the signals (special causes) – something the other approaches cannot effectively do.  Dr. W. Edwards Deming used to ask:

Four simple words.  How do you know something has changed?  That the last point is a signal?  The most effective way to do this is through the use of a control chart.

4.    The purpose of analysis is insight.

We will now take a look at some example data from the aviation industry and see how these four lessons - particularly using control charts to separate the noise from the signals -  apply.

The FAA tracks yearly data on unruly passengers.  The data for 1995 – 2011 are shown in the table below.  The data are available at this link.

How does this compare to the four lessons?    The FAA does attempt to provide some context with their notes.  But missing is a method of analysis and determining if the data contains any signals or just noise.  Look at Table 1.  What does the table of numbers tell you?  It is not easy to see.  It is better to put the data in a control chart format as shown in Figure 1.  An individuals control chart (X-mR) is used.  Only the X chart is shown.

Figure 1: Control Chart for the Number of Unruly Passengers per Year 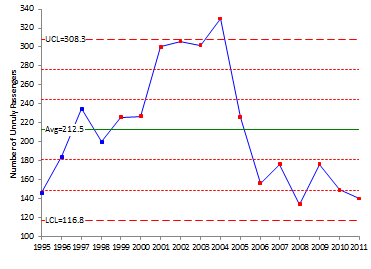 This chart makes the analysis of data much easier.  It provides some insight to the process.  There appear to be signals in the process as evidenced by a run above the average and then a run below the average.  Taking a look at the chart shows a significant increase in the number of unruly passengers starting in 2001 and going through 2005.  It appears that something happened to increase the number of unruly passengers.

Remember, a control chart signals that something has changed.  It does not tell you why it changed.  That is why you must use other techniques (see lesson 4 above) to find out what happened.  That is why it important to understand where the data came from (the context of the data).  Perhaps the increase was due to 9/11 and the crewmembers changed their impression of unruly passengers for a number of years.

Figure 2: Control Chart for the Number of Unruly Passengers per Year (Split Limits) 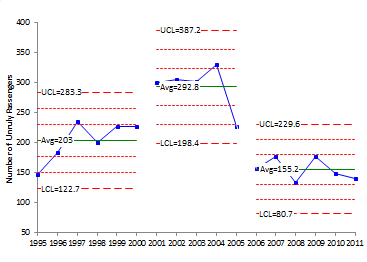 The FAA tracks boardings for each airport in the United States.  Atlanta is the world’s busiest airport.  Unfortunately, the data contained at this link only shows data for two consecutive years.  For example, you can compare 2011 with 2010 or 2010 with 2009 and so on.   All you can really do with this is say something like Atlanta’s boardings increased 2.8% from 2010 to 2011.  Is that significant?  Is it a signal?  What does the data tell you?

This approach really limits your method of analysis (the second lesson above).  It makes much more sense to take a look at data over time – from year to year so you can see what the underlying process is doing.

The year-to-year data are shown in Table 2 (yes, I went through each table and pulled out the data).  To the FAA’s credit, they do have some information on where the data comes from on the webpage – so they are trying to provide some context.

Table 2: Number of Boardings by Year at Atlanta’s Hartsfield Airport

Again, what can you see from the table of numbers?  It does seem that things are getting busier at Atlanta.  But to tell for sure, you should use a control chart.  Figure 3 shows the individuals control chart for these data.

Figure 3: Control Chart for the Number of Boardings in Atlanta Each Year 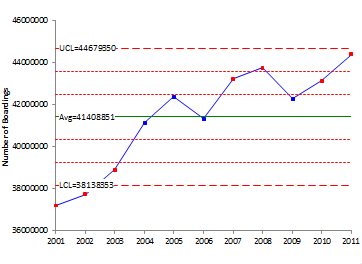 The control chart does show an increasing number of boardings over time in Atlanta.  A much better picture than just the table of numbers.  You would need to take a look at changes to the Atlanta airport (e.g., when new terminals opened, new runways, etc.) to begin to look for the reasons for the increases (beyond just additional travelers).

You could also look at the data with a trend control chart.  This type of chart is used if there is a variable that is moving upward or downward at “predictable” rate.  Figure 4 shows the trend control chart for the boardings data. 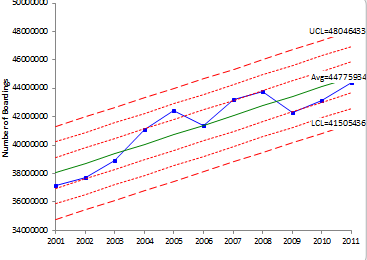 The chart shows an “in control” process for the boardings.  The equation for the center line on this chart is:

So, that must been that the on-time departure performance at Atlanta is decreasing.  Or does it?

The data above shows that the number of boardings in Atlanta is increasing each year on average.  Does that mean that the on-time departure performance is decreasing?  The Bureau of Transportation Statistics tracks these data and can be found at this link. The data are summarized in Table 3. 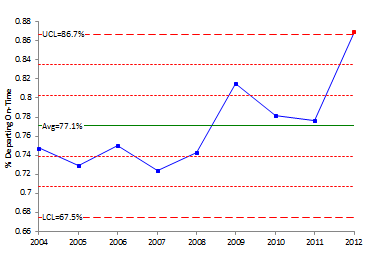 Wow, we do have a signal!  On-time performance is out of control on the good side for 2012 - despite the increase in boardings.  It would be interesting to understand why this occurs – but you would need additional information.  Atlanta opened a new international terminal in 2012 that added 12 gates to the existing 195.  Maybe this was the reason.   But this chart shows how a signal is separated from the noise using a control chart.  Sometime has changed to increase the on-time departure performance at Atlanta’s airport.

Feel like you are paying more to travel on an airline now?  Let’s find out.  The Bureau of Transportation Statistics tracks these data.  The data are shown in Table 4.

“Fares based on domestic itinerary fares. Itinerary fares consist of round-trip fares unless the customer does not purchase a return trip. In that case, the one-way fare is included. Fares are based on the total ticket value which consists of the price charged by the airlines plus any additional taxes and fees levied by an outside entity at the time of purchase. Fares include only the price paid at the time of the ticket purchase and do not include other fees paid at the airport or onboard the aircraft. Averages do not include frequent-flyer or “zero fares” or a few abnormally high reported fares.”

But you are still somewhat lost without looking the data over time.  This is done in Figure 6. 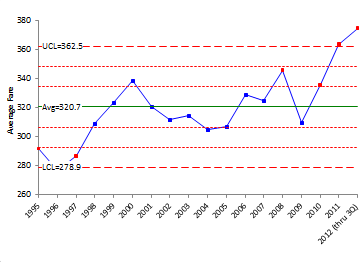 What does the control chart show?  Again, it has separated a signal from the noise.  The signal occurs at the end of the chart where there are four of five points beyond two standard deviations as well as the last two years being above the upper control limit.  There has been a significant increase in the average yearly fare. You are paying more to fly.

This month’s newsletter has reviewed the four lessons in the interpretation of data presented by Dr. Wheeler.  We also looked at examples from the aviation industry.  Like most industries, the data are usually presented  in tables - perhaps with some explanation of the numbers and perhaps with some average statistics.  Also never do you see the data presented to provide the most information – in a control chart format.  A control chart is a simple technique to use.  It is sad that so few understand the power contained in having the knowledge of variation at their fingertips.  Don’t be one of those.