You do not hear too much about global warming right now. Other things are taking the headlines. It has gotten warmer over the years. There are two ways to look at data like global temperature when using a control chart to analyze the data. One is to see if there is a significant trend in the data and then use a trend control chart.

The other is to see if the trend can be explained by step changes in the results and split the control limits to account for the step changes. This publications examines these two approaches using yearly global temperature deviations.

We have four previous publications on using control charts to analyze global temperature changes. The data used in all our publications were downloaded from the Goddard Institute for Space Studies (GISS) website at this link. GISS is part of the National Aeronautics and Space Administration (NASA). The data are now given as a deviation from the baseline period from 1951 – 1980. For example, the temperature deviation for 2017 is 0.9 °C. This means that 2017 was 0.9 °C higher than the baseline mean from 1951 to 1980. Our previous publications on global warming are reviewed briefly below.

The data used in the analysis below can be downloaded in an Excel workbook here. That data gives the monthly deviation in global temperature from 1880 to May 2020. The data also includes the change for the entire year. This annual change is shown in Figure 1 from 1880 to 2019. 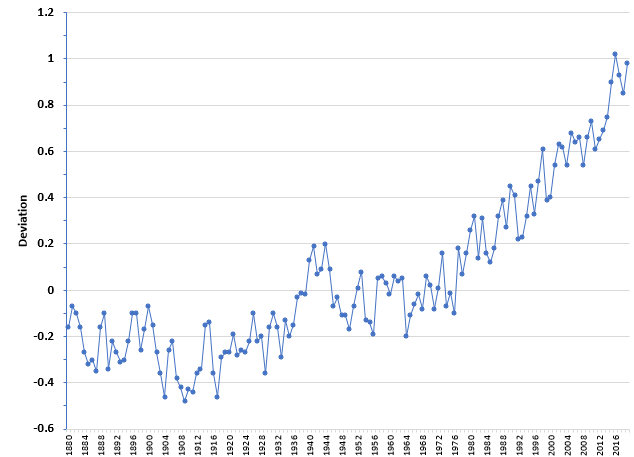 The data, prior to 1997, has been characterized by periods of stability followed by a step-change to new levels (see our first publication on global warming). Since 1997, the data has been trending upward – or has it? With more data now since 1997, there is a case to be made that it is still a series of step changes (like prior to 1997) and not a trend. We look at both cases below. But first a note on trends.

A Trendline Does Not Mean There is a Trend

It seems most of us use Excel. Excel has this interesting feature that misleads many of us. When you plot some data in an Excel chart, you can right-click on it and select the option "Add Trendline" and you have a trendline added to the chart. You can add a trendline to any data. And that line may go up or it may go down. But it does not mean there is a true trend in the data.

Figure 2: A Trendline That Is Not a Trend 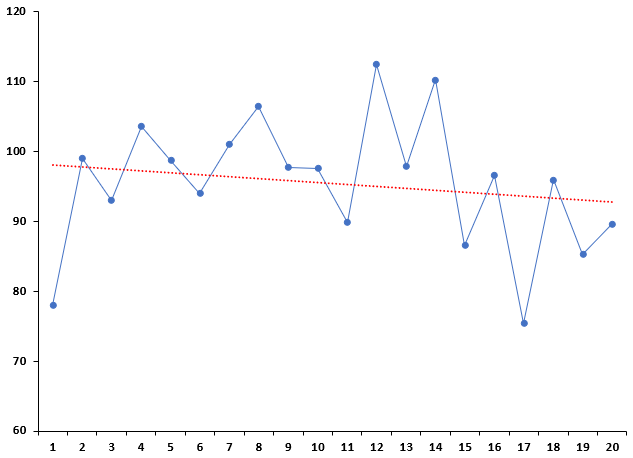 The data used in Figure 2 is included in the workbook with the global temperature deviations, which you can download here. 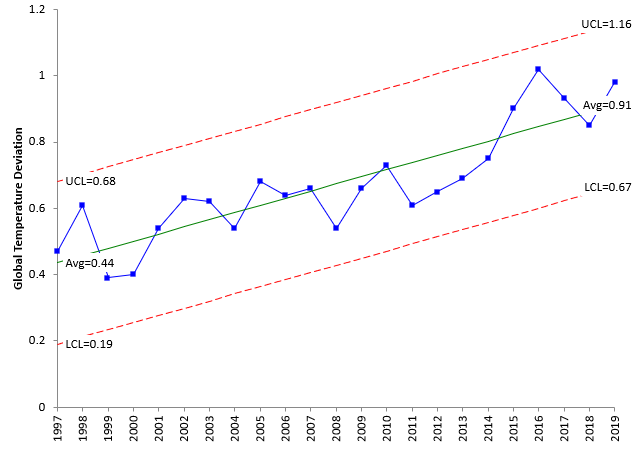 The calculations for the trend line and control limits are covered in the earlier publication Trend Control Charts and Global Warming. This trend chart is in statistical control. The slope of the center line is 0.0216, which means, on average, the temperature deviation increases 0.0216 each year. This is one way to look at the recent changes in global temperatures.

There is a challenge when examining data that is trending upward or downward. Is there an actual trend (like indicated in Figure 3) or can the trend be explained by a series of step changes in the data? This section gives some ideas on how you determine possible step changes in trending data.

The first thing to do is to simply make a control chart with no splits or trend analysis. Figure 4 is the control chart for global temperature deviations from 1997 to 2019. 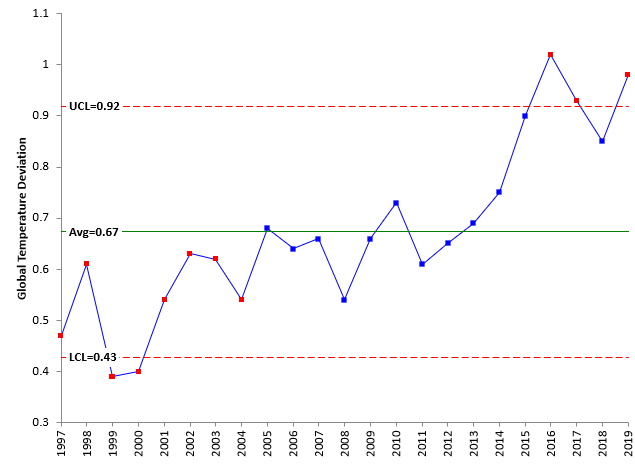 The idea is to look at when there are shifts in the data, usually denoted by out of control points. You can see the first 8 points (from 1997 to 2004) are below the average. This signals it could be a spot to split the control limits. Figure 5 shows the control chart with the control limits split at year 2005. 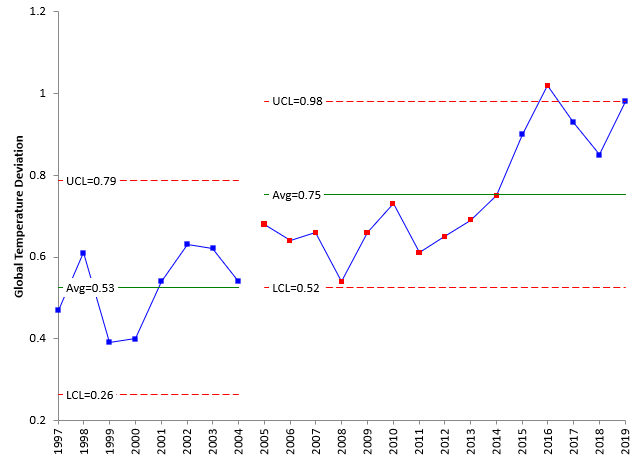 You can see from Figure 5 that the first 8 points now form their own stage – nicely in statistical control. Now there appears to be a second stage. There are 10 points (2005 – 2014) below the average. This suggests another place to split control limits. Figure 6 shows the control chart with control limits split at year 2015. 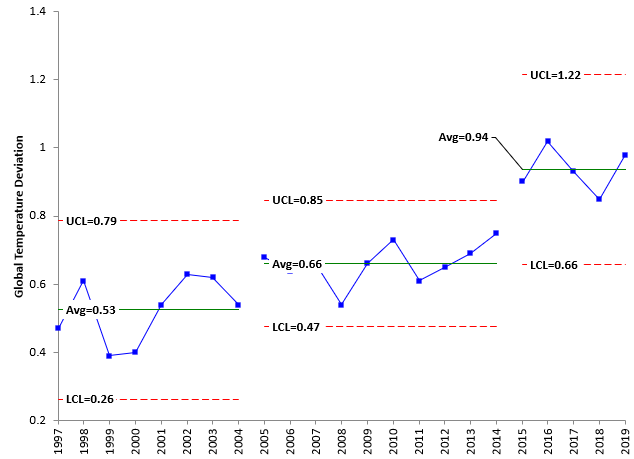 This control chart, with the split limits, is also in statistical control. There appear to be three distinct stages in the last 23 years:

The data for the first 5 months of 2020 shows a temperature deviation of 1.154. If this continues, it will be between the control limits for the last five-year period.

Trend or Split Control Limits – Which is Best?

Compare Figure 3 with the trending control limits, and Figure 6 with the three distinct stages. Which is better? Simple answer, the one you think best describes the process and is plausible to you.

Our first article demonstrated how the data from 1880 to 1996 could be described as a series of step changes over time. Only when you got to 1997 did the data really look like it was beginning to trend up quickly from year-to-year through 2015 – particularly with the upward trend from 2011 to 2015. But with additional years added to 2019, it begins to look more like the previous data – periods of stability leading to a step change in the temperature.

So, with the temperature data, I tend to think the staged approach is best because it is a pattern that has been repeated quite often since 1880. Now the question: what causes those step changes? Good question. Perhaps it is time to study how the greenhouse gasses or other factors have grown over the years and see if there is a similar pattern.

Sometimes data trends up or down. The question with control charts is how to handle this type of data. There are options sometimes. If the trend is close to a straight line going up or down, use a trend control chart. Other times, the data tends to go up or down but bounces around a lot. In that case, you may still want to use a trend control chart. Or you might want to see if the trend is caused by step changes and is really composed of stages with each stage being in control but step changes in between the stages. The global temperature deviations were used to explore these options.