A word of caution to start with: a significant correlation between two variables does not mean that one is the cause of the other. This is the difference between a "correlational" relationship and a "causal" relationship.

Please feel free to leave comments at the end of the newsletter. 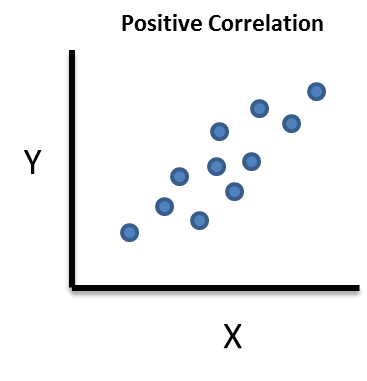 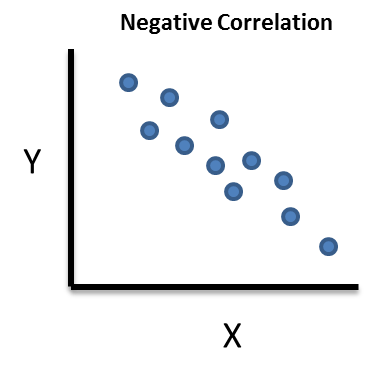 A negative correlation exists between variable X and variable Y if a decrease in X results in an increase in Y (and vice-versa). 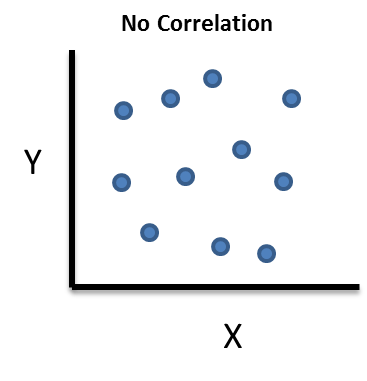 In this case, a change in X has no impact on Y (and vice-versa). There is no relationship between the two variables. For example, the amount of time I spend watching TV has no impact on your heating bill.

But, to complicate things even more, there may be a third, unmeasured variable (Z) that is actually the cause of the change.

Jeffery Ricker has a good discussion of this. I will summarize what he says here. A study was done in 2005 to determine the impact of where students sit in a classroom to the grade they received. The study indicated that students who sat up front received better grades than those who sat in the back of the room. The seats were assigned at random. A follow-up study in 2007 by others offered a different way to interpret the results. This is how Dr. Ricker explains it:

"In the correlation between classroom seat location and course grades, it could be that

The key point is that is impossible just from a correlation analysis to determine what causes what. You don't know the cause and effect relationship between two variables simply because a correlation exists between them. You will need to do more analysis (such as designed experiments) to define the cause and effect relationship.

The example involves a study done in England to look for a correlation between smoking and lung cancer. Twenty-five occupational groups were included in the study. The X variable is the number of cigarettes smoked per day relative to the number smoked by all men of the same age. If X = 100, then the men smoked an average amount; if above 100, the men smoked more than average and if below 100, they smoked less than average. 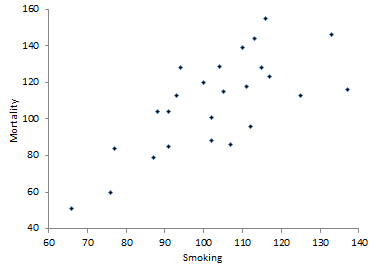 The scatter diagram does appear to show a positive correlation. The mortality rate appears to increase as the smoking ratio increases. In addition to this visual picture, it would be nice to have a numerical measurement of this correlation. This is done by calculating the correlation coefficient.

If R is positive, then there is a positive correlation between X and Y. What makes R positive? Look at the numerator in the R equation:

The calculation of the correlation coefficient is straightforward based on the equation above. The calculations are shown in the table below.

R can now be calculated:

The R value is positive indicating a positive correlation. This confirms what the scatter diagram shows.

When is R Significant?

You have your scatter diagram and the value of R. Is the correlation significant? In other words, does it mean anything to you in the real world? Some people give guidelines for interpreting R. For example:

The author does note that others may question his boundaries. They are somewhat arbitrary. It is much better to determine the "p value" to help you determine if the correlation is significant. A p value is the probability of getting something more extreme than your result, when there is no correlation between the two variables. The p value is calculated using the t distribution where:

You can then use the t distribution to find the probability associated this value of t for 23 degrees of freedom. In Excel, use the TDIST function. The value of p is then:

Outliers in the data (special causes of variation) can sometimes mask the results. That is why it is important to construct a scatter diagram to look for outliers. You can also use a Box-Whisker chart to look for outliers (see our March 2007 newsletter). Suppose you have the data set below and you want to see if there is correlation between X and Y.

You could calculate the correlation coefficient and the p value. If you do that, you get the following results:

Since p is so large, you conclude there is no correlation between X and Y and go happily on your way. The scatter diagram for the two variables is shown below. Note the outlier in the upper right corner. 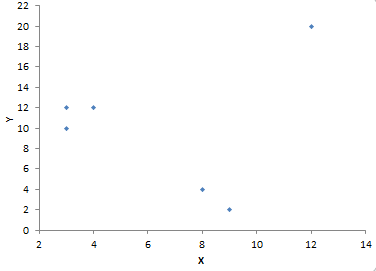 Since this is so far removed from the rest of the data, it may be an outlier. So, do you just toss the point out and redo the calculations? No, you should not just assume that is an outlier. You need to find out if there was a special cause of variation. If you find the reason for the outlier, you may toss the point out. If not, you probably need to consider taking more data. If you deleted the point from the calculations, the results are:

A couple of quick cautions on correlation analysis. A significant correlation does not prove causation. You will need to do more work to prove that in most cases. Correlation is looking only at linear relationship between the variables. And last, your analysis is valid only for the range of data you used. There may be a different result if you use a different range of data.