What is a hypothesis?  According to the Merriam-Webster’s on-line dictionary, a hypothesis is an idea or theory that is not proven but that leads to further study or discussion.  There are many examples of hypothesis.  For example, people who get flu shots are less likely to get the flu.  Or just the opposite hypothesis: getting a flu shot makes no difference in whether someone gets the flu.

So, a hypothesis is just a statement of theory.  It may or may not be true.  A drug company can claim that a new drug is better at decreasing blood pressure.   You may claim that the diet plan you created helps people lose more weight than a nationally known diet plan.  All these things are just statements – just hypotheses.

You can download this publication as a pdf here. 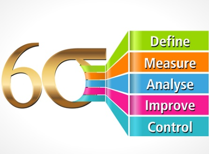 A lean six sigma project team is recommending a change in the coating process you are in charge of to help reduce costs.  The key variable in your process is the thickness of the coating.

The team wants to perform a hypothesis test to prove that the average coating thickness will not change.  The team will go through the basic five steps of hypothesis testing:

The details of the five steps are shown below.  However, before those steps are covered, a review of the standard normal distribution is needed.  This will be required when we do some calculations.

A Brief Pause for the Standard Normal Distribution 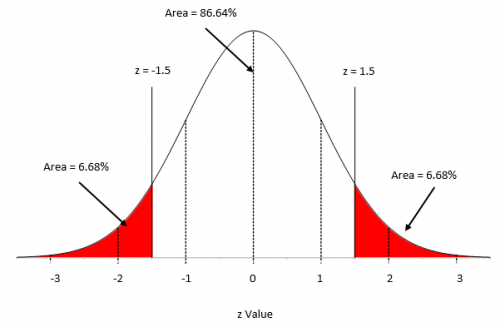 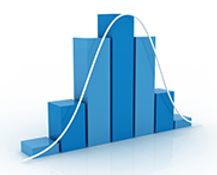 These percentages can also be viewed as probabilities, e.g., the probability of getting a result that is less than -1.5 standard deviations below the average is 0.0668.  We will make use of this knowledge below.  Now back to the steps in hypothesis testing.

This is called a two-sided hypothesis test since you are only interested if the mean is not equal to 5.  You can have one-sided tests where you want the mean to be greater than or less than some value.

Step 3: Collect the Data and Calculate the Sample Statistics

The process change is made and data are collected.  The team recommended collecting 25 samples over time.  (Note: The choice of sample size is very important.  This will be subject of next month’s publication.)  The average coating thickness was measured for each sample.  The following statistics were then calculated: 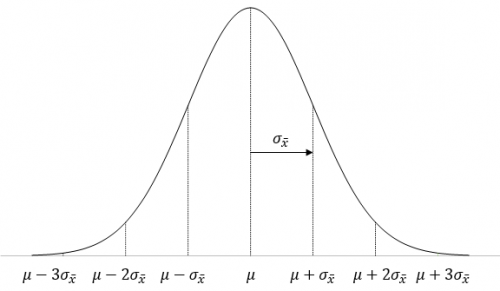 To be able to draw your sampling distribution, you need to know μX  and  σX.  Since you assumed that the null hypothesis is true, μX  = 5.0.  The standard deviation of the sample averages is given by:

where σ is the population standard deviation and n is the sample size.

Now you can draw the sampling distribution and add the sample average as shown in Figure 3. 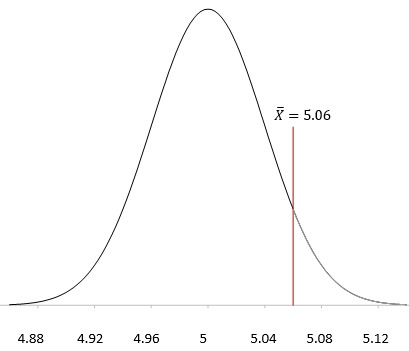 Now we return to the z score.  Remember, the z score is a measure of how many standard deviations the sample average (X )is from the population average (μ).   For this example, the z value is calculated as:

Step 5:  Compare the p value to the Desired Significance Level

In step 2, we set the significance level at 0.05.  Since our p value is greater than this, we conclude that the coating thickness was not impacted by the process change.  We accept the null hypothesis as probably being true.  If the p value had been less than 0.05, we would rejected the null hypothesis and said that the process change did impact the coating thickness.

This newsletter has taken a look at how to perform hypothesis testing.  The five steps are:

The normal distribution was used to demonstrate how hypothesis testing is done.  You will not always be dealing with the normal distribution but the process is essentially the same.  One item that is still to be discussed is how to select the sample size.  This will be the subject of a later publication.