(Note: all the previous publications in the basic statistics  category are listed on the right-hand side.  Select "Return to Categories" to go to the page with all publications sorted by category.  Select this link for information on the SPC for Excel software)

Please feel free to leave a comment at the end of the publication.  You can download a pdf copy of this publication here.

Our SPC Knowledge Base has several publications showing how to analyze sample results. For example, you might want to test out two different supplier’s materials in your process. You take samples using both supplier’s materials and compare the results using a t-test for comparing the means of two processes. This type of test assumes you have a normal distribution.

Most of the time, the normality assumption is probably not thought about. It is simply ignored. There are times when you shouldn’t ignore this assumption. As noted in the last publication, there are lots of data that are not normal including lifetime data, call center waiting times, bacterial growth, or the number of injuries in a plant. You should not be using t-tests with these types of data.

The major difference between nonparametric techniques and those that require a normal distribution is the use of the median (μ ̃) instead of the average. The median provides a better estimate of the center of a non-normal distribution.

The example data and the mathematical equations to do the analysis come from the book “Statistics and Data Analysis: From Elementary to Intermediate” by Ajit Tamhane and Dorothy Dunlop.

where θ1 and θ2 are the location parameters for the two distributions.

The methodology involves comparing each observation from one distribution with each observation from the other distribution. It is easiest to understand this by looking at an example. These data are from the reference above. A company is interested in the failure time of a capacitor. They test 8 capacitors under normal conditions and then 10 capacitors under thermally stressed conditions. They want to find out if the thermally stressed conditions reduce the failure time. The data are shown below.

If you compare each of the values to each other, you get the following:

If the sample size is small, you use the null distribution to determine if u1 is large. You have to refer to a table that gives you the probabilities associated with the values of n1, n2 and u1. There is a table in the reference above. The p value from that table is 0.051.

If the sample size is large, you can approximate the null distribution using with normal distribution. In this case, you can calculate z using the following equation:

The calculated value of z is 1.643. You can use Excel’s NORM.S.DIST function to find the p value. The p value is 0.501, very close to the one from the table in the reference.

The output from the SPC for Excel software for the data in Table 1 is shown below. 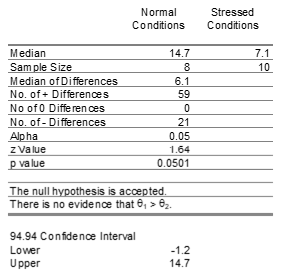 The p value is too close to alpha. So, in this example, there should be no clear conclusion.

This methodology involves ranking all the observations in ascending order. The first observation is ranked 1, the second is ranked 2, etc. Then you sum the ranks by the sample and calculate an average rank for that sample. So, the methodology is looking for differences in the ranks for the various samples. There is a statistic called the Kruskal-Wallis statistic that is calculated. If it is large, then H0 is rejected. We will not show the details of the calculations here.

Consider the example from the reference above. Four different teaching methods are being compared. Test scores were collected for each teaching method. The data are shown in Table 2.

The analysis was performed using the SPC for Excel software. The output is shown below. 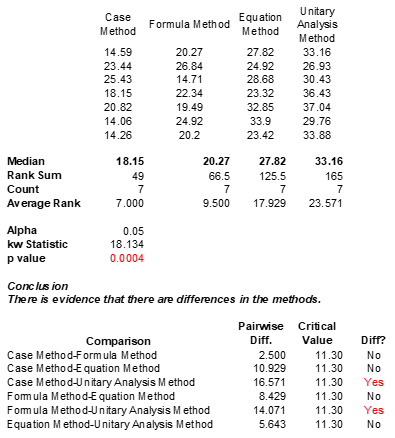 Pairwise comparisons are used to determine which teaching methods are different. That is the bottom part of the output. The pairwise difference is determined and compared to a critical value. Those with a pairwise difference greater than the critical value are significantly different. The “Case Method” and the “Formula Method” are both significant differently than the “Unitary Analysis Method” based on this output.

This publication has provided an overview of two nonparametric techniques. One was the Mann-Whitney test to compare two independent samples to see if one distribution tends to be greater or larger than the other distribution. The other was the Kruskal-Wallis test which looks at two or more distributions to see if any are different. Both methods are distribution-free methods. No assumption is made about the underlying distribution. The median is used as a measure of the center of the distribution.