(Note: all the previous publications in the comparing processes category are listed on the right-hand side.  Select "Return to Categories" to go to the page with all publications sorted by category.  Select this link for information on the SPC for Excel software.)

Several months ago, I ran across a new one to me – the Analysis of Mean Moving Ranges (ANOMmR). This month’s publication explores how this technique is used to look for differences in the average moving ranges between processes. All the ANOM techniques use a chart to easily show when significant differences do or do not exist.

You may download a pdf copy of this publication here.  Please feel free to leave a comment at the end of the publication.

The ANOMmR method was introduced to me in an article published this year by Quality Digest entitled When are Instruments Equivalent? – Part Two. The article was written by Dr. Donald Wheeler and James Beagle III. The two-part series examined how you can tell if measurement instruments are equivalent. Part 1 of the series used the ANOM technique to look for instrument bias. Part 2 introduced the ANOMmR technique to look for differences in measurement error as defined by the average moving ranges.

So, the ANOMmR method is used to find out if a group of “things” have the same or different average moving ranges. The “things” can be measurement instruments, machines, shifts, etc. The following must be true to perform the ANOMmR technique:

There are four machines that make the same product. We want to know if the variation is the same between the four machines. A sample is taken from each machine every 30 minutes and measured for a quality characteristic. The results for the past 15 hours are shown in Table 1 for the four machines.

In this example there are m = 4 processes and each process has k individual values.

Like many things, the first thing to address is consistency. Are the results from each machine consistent? Remember, it makes no sense to compare any processes unless those processes display consistency. The easiest way to demonstrate consistency is by using a consistency chart – in this case an individuals control chart (X-mR).

Figure 1: X Chart for Machine A 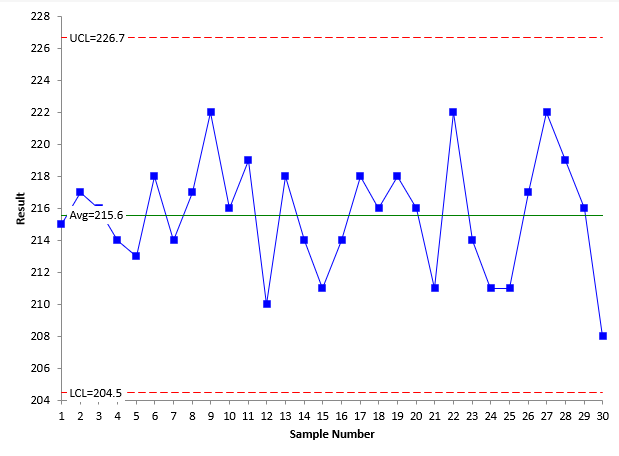 The other two lines are the upper control limit (UCL) and lower control limit (LCL). These limits set the bounds of the normal (common cause) variation for Machine A. If all the points are within the limits and there are no patterns, the process is consistent with respect to the X values. This means the process is in control with respect to the X values. This is the case in Figure 1.

The moving range (mR) chart for Machine A is shown in Figure 2.

Figure 2: mR Chart for Machine A 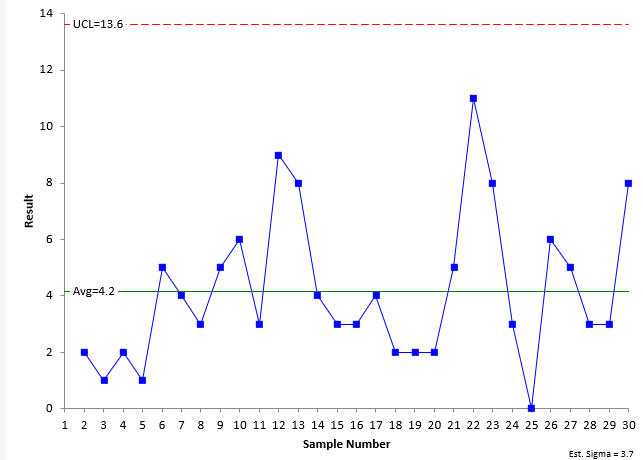 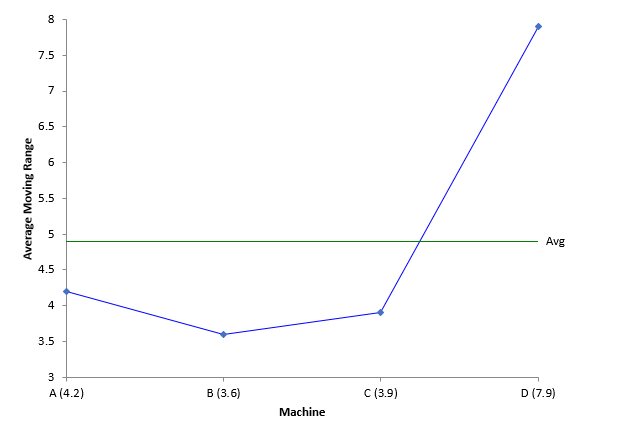 The detection limits are then:

These detection limits are then added to the ANOMmR chart as shown in Figure 4. 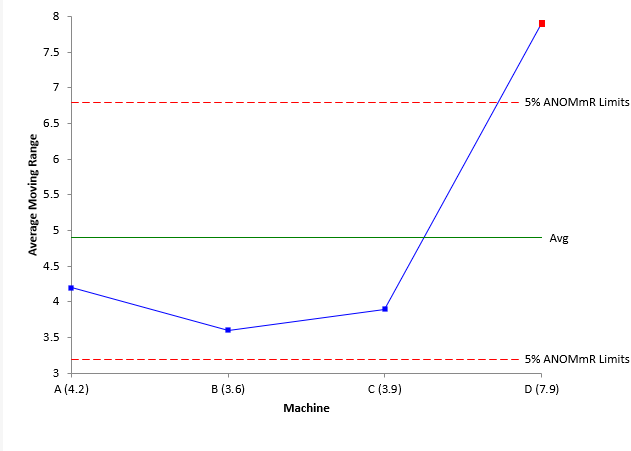 Any point beyond the detection limits indicates that there is a detectable difference in the average moving ranges (variation). You can see from Figure 4, that Machine D has a detectable difference. The other three machines appear to have the same amount of variation. The ANOMmR provides a picture that is easy for everyone to interpret.