Sometimes you will need to compare two processes. For example, you might be comparing the products from two different suppliers or from two sister plants. You might be comparing two ways of processing invoices. The question is, "Are the two processes making the same product?" This month's newsletter demonstrates how to compare the products from two different processes when there is no sufficient data to use control charts.

How can the product from two processes differ? They can differ by the average value and by the amount of variation. For example, suppose you are comparing the purity of a product produced in Process A and in Process B. The calculated average purity from Process A will most likely be different from that calculated for Process B. Is this difference significant? Is there truly a difference in purity between the two processes? The calculated standard deviation (the variation) will also be different. Again, is this difference significant? In this newsletter, you will see how to compare the variances in two processes to see if they are the same. And if the variance is the same, you can construct a confidence interval for the difference in the two averages. This confidence interval will tell you if there is a significant difference in the two averages.

The procedure for comparing two processes is given below. This technique represents a snapshot in time for the two processes. You cannot be sure of obtaining similar results in the future unless the processes are in statistical control.

The approach used below to construct a confidence interval for the difference in two averages assumes that the variation is consistent between the two processes, i.e., each process has the same variance. This must be checked. To determine if two variances are the same, the F distribution is used.

Many statistical books contains the F tables. You can also determine the F value using Microsoft Excel's function FINV. This gives the critical value of F for a given confidence coefficient and the two degrees of freedom.

Once it has been determined that the variation is consistent between the two processes, the confidence interval for the difference between the two averages can be constructed.

The pooled variance is used to help estimate the standard deviation, sdiff, which estimates the variation of differences in two sample averages.

This standard deviation is then used to construct a confidence interval around the difference in the two averages.

where t is the value for the t distribution corresponding to n1 + n2 - 2 degrees of freedom. The value of t can be found in the t tables of many statistics books. It is also available in Microsoft Excel using the TINV function.

If the confidence interval does not contain zero, it is concluded that the two processes are operating at different averages.

If the confidence interval does contain zero, you conclude that there is no evidence that the two processes are operating at different averages. They appear to have the same average.

In a plant, two different reactors are making the same product. The question was asked if the reactors produce the same yield. The data below were collected. Is there a difference in the yield from the two reactors? 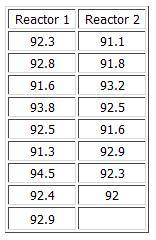 The first step is to calculate the average and variance for each of the reactors. The variance is the square of the standard deviation. The results are:

For α = 0.05, the critical value of F is 3.73 (using the FINV function in Excel). Since the calculated value of F is less than this, we conclude that the variance is consistent between the two reactors.

The pooled variance is then calculated.

The next step is to calculate the sdiff =.

Since the interval contains zero, we conclude that there is no evidence that the two reactors are operating at different yields.

Remember that this technique represents a snapshot in time of the processes. If the processes are not stable, you cannot be sure of getting a similar result in the future.