On January 14, 2021, NASA published the following on their website:

Continuing the planet's long-term warming trend, the year's globally averaged temperature was 1.84 degrees Fahrenheit (1.02 degrees Celsius) warmer than the baseline 1951-1980 mean, according to scientists at NASA's Goddard Institute for Space Studies (GISS) in New York. 2020 edged out 2016 by a very small amount, within the margin of error of the analysis, making the years effectively tied for the warmest year on record.

"The last seven years have been the warmest seven years on record, typifying the ongoing and dramatic warming trend," said GISS Director Gavin Schmidt. "Whether one year is a record or not is not really that important — the important things are long-term trends. With these trends, and as the human impact on the climate increases, we have to expect that records will continue to be broken."

So, it looks like the earth continues to get hotter and hotter. We have looked at global warming before. The last time we took an in-depth look was January of 2018. We did look at trends versus step changes in the data in 2020. We will take another look at the data through the end of 2020. Has anything changed? What can we predict about 2021?

One purpose of a control chart is to determine if a process is in statistical control – if it is consistent and predictable over time. This is accomplished by plotting the data over time and adding the average and control limits. As long as there are no points beyond the control limits or patterns in the data, then the process is in statistical control.

What can control charts tell us about global warming? This publication takes an in-depth look at the global temperature deviations from 1880 through 2020. We first did this in 2015, but the data we are using in this publication is slightly different. It might surprise you that, over the time span from 1880 to 2020, there have only been stable periods. The first five stable periods had consistent, predictable temperatures. The last period has also been consistent – except the global temperature is trending up in a fairly predictable pattern.

The individuals control chart (X-mR) is used to analyze the data in this publication. Only the X chart is shown though. All the control charts were produced using the SPC for Excel software.

We have five previous publications on using control charts to analyze global temperature. These are briefly described below.

2. Trend Control Charts and Global Warming (January 2016): This publication expanded on how to use trend control charts and the calculations involved.

3. SPC and Global Warming Update (February 2017): This publication updated the results with the 2016 data. The data used in this analysis was the LOTI (land-ocean temperature index) data. The LOTI data are considered more accurate than the dTs data used in the first publication listed above. This is also where it was discovered that the historical data had changed somewhat since it was examined in 2015. Our predicted global temperature for 2016 was quite a bit lower than the actual.

5. Global Warming: A Trend or Step Changes? (June 2020): This publication focused on if it was better to use a trend control chart for the period since 1997 or to use a series of step changes in the process.

The data used in all our publications so far were downloaded from the Goddard Institute for Space Studies (GISS) website at this link. GISS is part of the National Aeronautics and Space Administration (NASA). The data are given as a deviation from the baseline period from 1951 – 1980. For example, the temperature deviation for 2020 is 1.02 °C. This means that 2020 was 1.02 °C higher than the baseline mean from 1951 to 1980. You may download the data used at this link.

This current publication is similar to our first one in December 2015. The control charts have been updated to reflect using the LOTI data instead of the dTs data. There are differences between the two datasets, and it does not appear that GISS uses the dTs data anymore. Our current publication has also been updated to include the data since 2015.

Figure 1 is a plot of the global temperature deviation as run chart over time from 1880 to 2020 using the current data as deviations in °C from the baseline period. 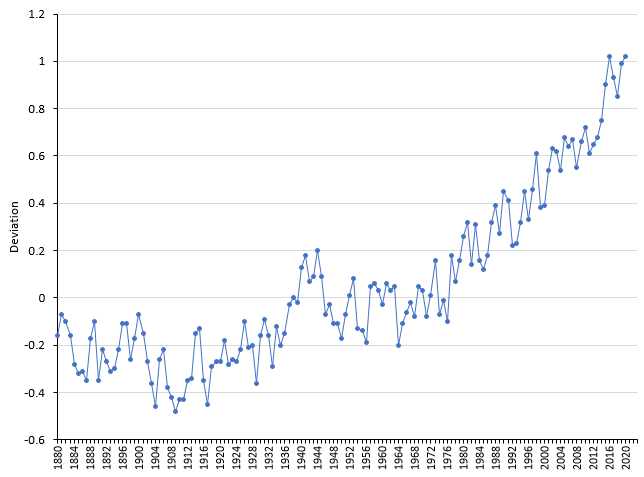 As discussed in previous publications, there are periods of "constant" temperature that is followed by a step change upward through most of the chart. The last part of the chart shows the general upward trend in global temperature.

The challenge in looking at the global temperature data is finding periods of temperature deviations that are consistent and predictable, i.e., in statistical control. During these periods, the temperature is the "same" each year. One way to do that is to simply look at the run chart, starting from the left, and look for periods that are stable. The first stable period appears to be from 1880 to 1902. 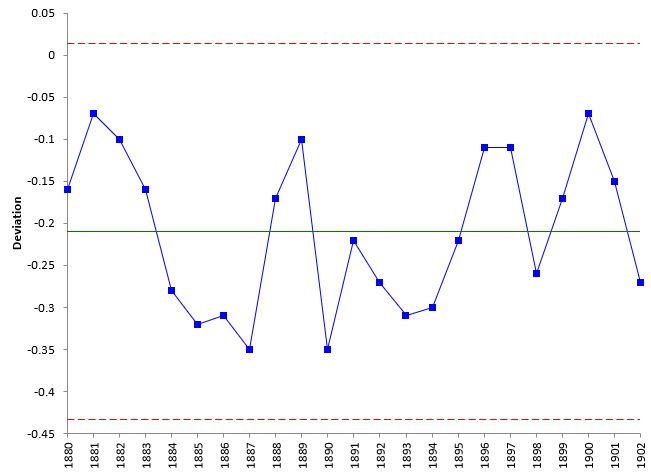 Temperature deviations from 1880 to 1902 are plotted on the chart with the average (the solid line) and control limits added (the dotted lines). Look at this chart. There are no points beyond the control limits and no patterns. The process is in statistical control. The next stable period appears to occur from 1903 to 1912. This can be added to the control chart in Figure 2 to see the impact. 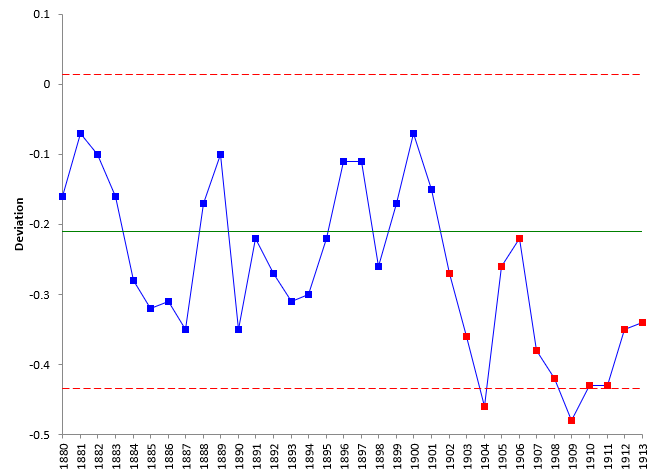 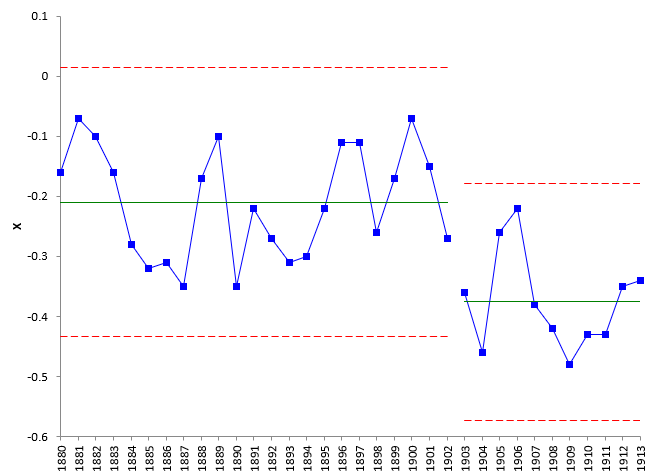 The next stable period is from 1914 to 1936. This time period is just about the same as the first time period from 1880 to 1902 in terms of the average temperature deviation. The control chart with the split control limits for the three periods is shown in Figure 5. 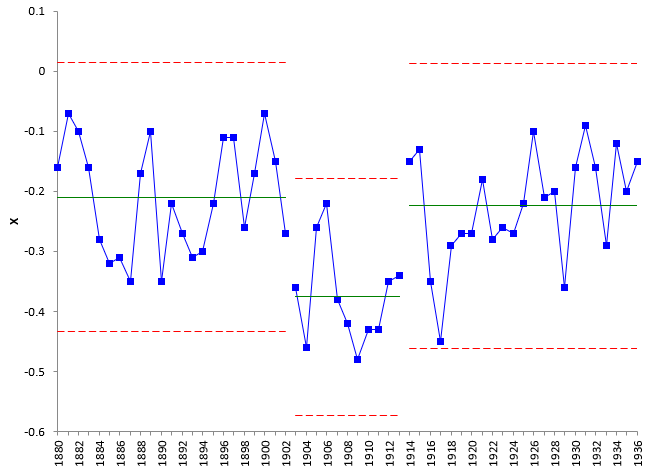 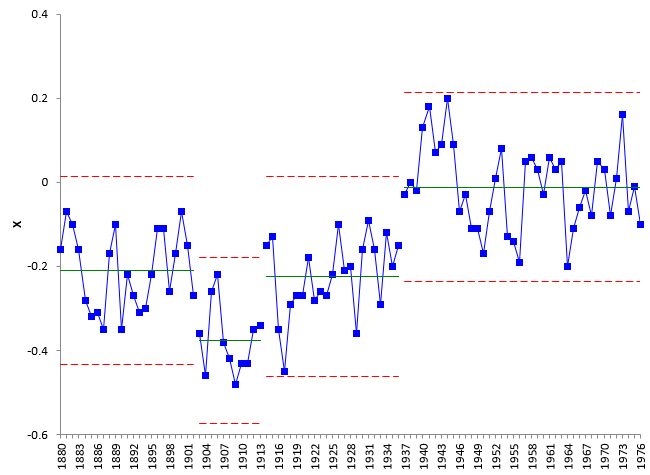 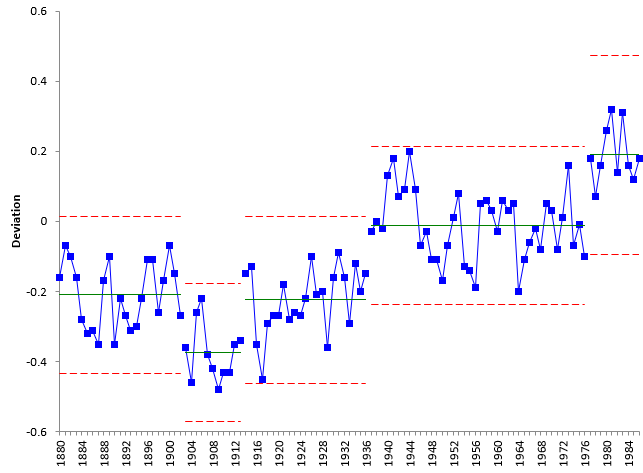 The deviations starting in 1987 show a different pattern than the previous data. There does not seem to be clear periods of stable temperatures. An upward trend has started in 1987 that has continued at least until 2015. Then it looks like another step change in temperature that could represent a leveling out of temperature – perhaps forming a new baseline. But that is not totally clear yet. Figure 8 is a run chart of the data from 1987 through 2020. 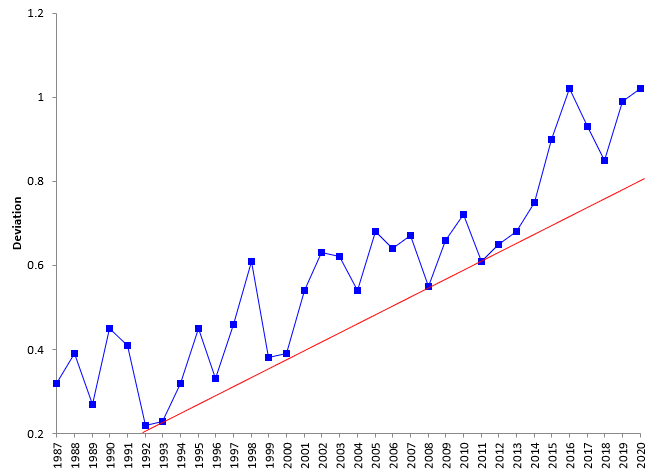 There is a red line plotted in Figure 8. This line has an upward trend. This line shows how the data hits a low point, moves above it, and then returns to it. There is definitely a trend in the data. For this time period, a trend control chart should be used. Figure 9 is the trend control for the data from 1987 through 2020.

Figure 9: Trend Control Chart for Global Temperature Deviations from 1987 to 2020 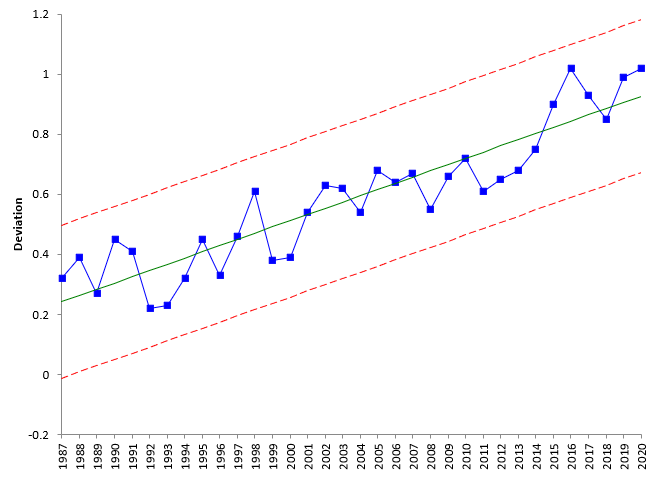 The best fit line for the global temperature deviations from 1987 to 2020 is given by:

Figure 10 shows the control chart using all the data. 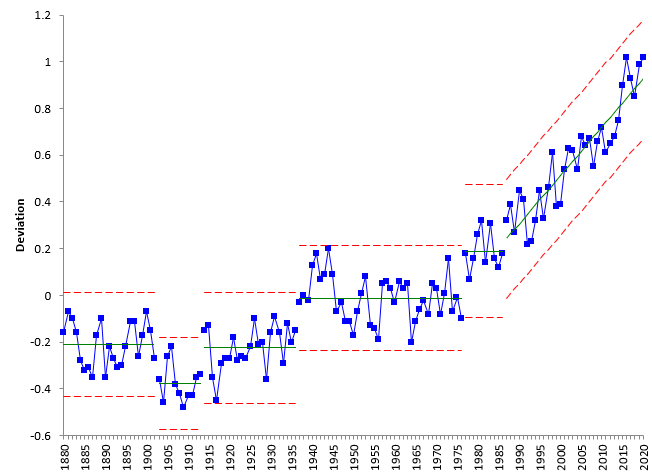 The time period since 1987 is also stable, but the stability is around a trend. Since 1987, the temperature deviation has been increasing at a rate of 0.02 degrees per year.

This month's publication updated our previous publications on global warming. The global temperature deviations based on the baseline period of 1951 – 1980 for the time period from 1880 to 2020 were used in the analysis. The analysis involved examining the data to determine if there were periods of stable temperatures. There were 5 such periods from 1880 to 1986. Each period produces "in control" temperature deviations. Starting in 1987, the data changed. The data began to trend upward, but also in a predictable pattern over the time period of 1987 to 2020. A trend control chart was used to analyze that data. The best fit line can be used to predict the temperature change for 2021. The predicted value for 2021 is 0.948.