You have a destructive test method – one in which the sample is destroyed during testing.  It is also a critical-to-quality variable for a major customer.

But you can’t re-run a “standard” with a destructive test.   The sample is destroyed during testing.  So, what do you do?

You may download a pdf version of this publication here.  Please feel free to leave a comment at the end of the publication below.

The only way to analyze the consistency of a destructive test is to use the concept of “duplicate samples” These are simply two samples that are the “same.”  They are not identical, but they are as close as possible to being alike.  This will require some thought and judgment on your part, but most of the time, you will be able to find “duplicate samples.”

We will use these duplicate samples to get the information the customer wants.

Consistency of the Destructive Test

Duplicate samples are tested and the results analyzed using a range control chart.  For example, suppose we have taken duplicate samples from one steel bar and measured the hardness of both samples.  The two results are 28.0 and 27.9.

We will use hardness as the example here.  Twenty subgroups of “duplicate” samples have been tested for hardness.  The results are shown in Table 1 along with subgroup average and subgroup range results that we will be using in the calculations 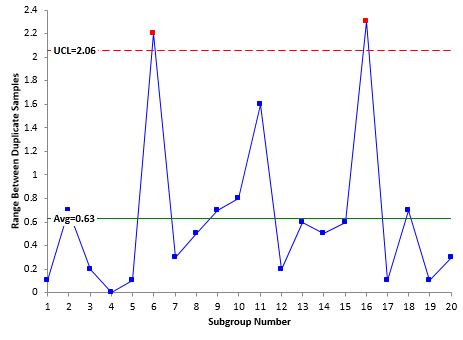 A control chart is in statistical control if there are no points beyond the control limits and no patterns.  Please see our publication on interpreting control charts if you would like more information on the various out of control tests.

Look at Figure 1.  There are two subgroup ranges (subgroups 6 and 16) beyond the UCL.  This means that the test method was not in statistical control for these two subgroup ranges.  Something happened that caused the range between the duplicate samples to be larger for those two subgroups when compared to the rest of the subgroups.  The objective is find out what happened – the special cause of variation – and prevent it from happening again.  This is the only way to ensure that this destructive test method is consistent.

The objective is to remove the special causes of variation so the test method is in statistical control – no points beyond the control limits and no patterns.  This is how you let your customer know that your destructive test method is consistent.

% Variance Due to Destructive Test

The basic equation describing the relationship between the total variance, the product variance and the test method variance is given below.

The % variance due to the test method is then given by:

So, to determine how much of the total variance is due to the test method, we need to determine the two sigma values in the equation above.

The measurement system variance can be determined from the average range using the following equation:

where R is the average range, d2 is a control chart constant that depends on the subgroup size (n).  For a subgroup size of 2, the value of d2 is 1.128. 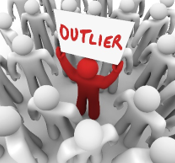 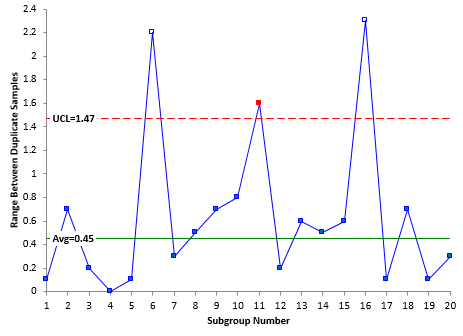 Take another look at Figure 2.  Is this range chart in or out of control?  There is now another point (subgroup 11) above the upper control limit – another special cause of variation.  You continue to remove the out of control points until all the remaining points are in statistical control. Figure 3 shows the range chart with subgroup 11 removed. 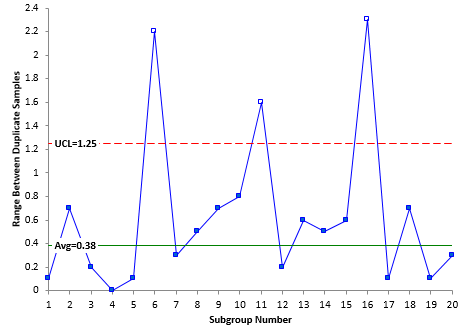 All the points are now in statistical control.  The average range is 0.38 and can now be used to determine the test method variance.

This is the test method variance for the average of the duplicate samples. 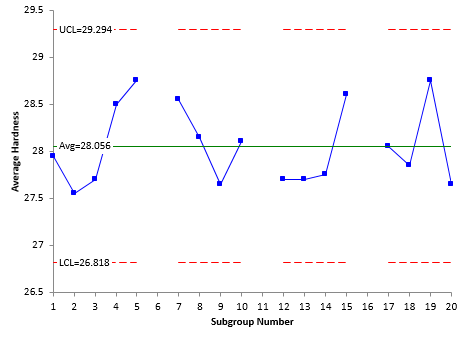 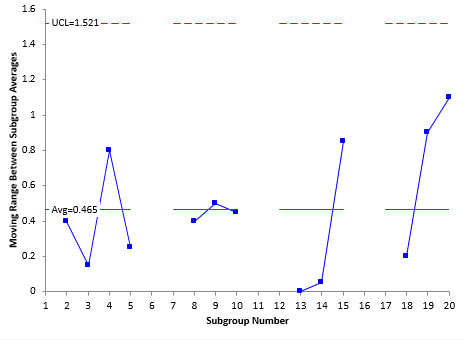 We can now estimate the % variance due to the test method.

This tells us that the test method is responsible for 33.9% of the total variance seen in the process.  This is the second piece of information your customer wanted.  And since the destructive test method is consistent, this will remain true until the test method is improved.  You have now answered the two findings from the audit.

You might say that 33.9% is too large for a test method.  Dr. Donald Wheeler gives an excellent way of defining how good a test method is.  We covered this in a previous publication.  The test method is actually a second class monitor and is still very useful for monitoring the process.