Collecting and analyzing data are a vital part of process improvement. It is important to be sure that the data we are collecting are accurate and precise. If not, we may not be able to see the effect of improvements we are trying to make in the process. In addition, we may be looking for a special cause in an operating unit when the real cause is in the measurement system. 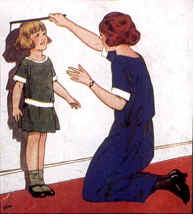 We rely on measurements to tell us when our process is operating correctly, when there is a problem, or when we have made an improvement. When we take a measurement, we often assume that the measurement result is the "true" value of our sample. Unfortunately, this is not true. Measurement systems, like any other process, are subject to variation. You will not always get the same result, for example, when you run a sample again or take another temperature measurement. The following examples illustrate two ways the measurement system can impact a process.

Suppose you are an operator in a processing unit. You have started a control chart on a certain product parameter. This parameter is determined by a lab test method. Suppose the last point you plotted is above the upper control limit. This means there is a special cause present in the process. Your responsibility is to begin looking for the cause. Where do you start? There are many sources of variation present in a process. A control strategy helps you determine what to look for. The cause could be due, for example, to a change in raw materials or a sudden drop in the outside temperature. You begin to look for the cause. This takes time.

Test methods must be accurate and precise. These two terms are defined below.

Accuracy refers to the absolute correctness of the measurement system relative to a standard. There are many standards. For example, one method of checking the accuracy of a laboratory weigh scale is to put a standard 10 gram weight on the scale. On average, the scale should read 10 grams if it is accurate.

The figure labeled 2 above shows a marksman who is accurate but not precise. If you average all his shots, the average would be close to the bull's-eye. However, the difference between shots is very large.

A marksman who is precise but not accurate is shown in the figure (3). His average shot is not near the bull's-eye. However, the difference between consecutive shots is very low.

Last, the figure (4) also shows an example of a marksman who is neither accurate nor precise. There is no telling where the next shot will end up. He is off the bull's-eye and the differences between shots are very large.

PFD for Monitoring a Test Method 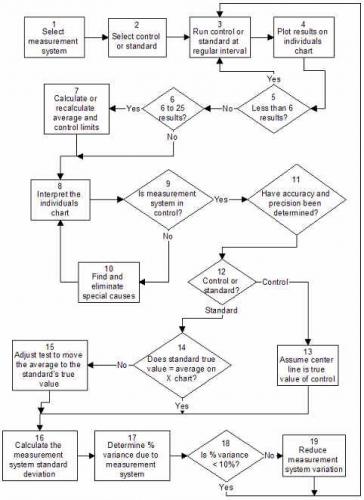 The process for monitoring the accuracy and precision of a test method is given in the process flow diagram above.

As mentioned before, test methods, like all measurement systems, can be viewed as a process. As such, test methods have common and special causes of variation. Control charts can be used to monitor the accuracy and precision of test methods.

The procedure for determining the accuracy and precision of a test method is given below.

An example using this procedure is given below.

To understand the steps in this procedure consider the following example. A test method is used to measure the amount of moisture in a resin. To determine the accuracy and precision of the test method, a control was selected. This control contained about 0.12 wt% water. The true value of the amount of moisture in the control is not known. The steps in the procedure for determining the accuracy and precision of this test method are given below.

Step 1: Run a standard on a regular basis.

The resin control is tested once per shift for moisture content. The results are recorded. The data are given below. 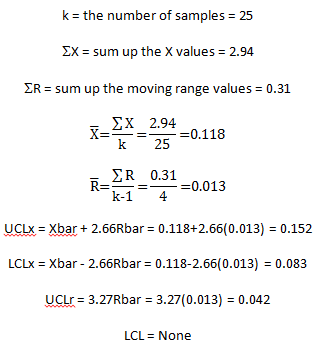 As can be seen in the figure, the range chart is in statistical control. However, the X chart is not in statistical control. The last seven points on the X chart are above the average. This means that there is a special cause present. Something has happened that caused the average to increase. When this occurs, the test method should be treated as if something is mechanically broken. No more samples should be run until the reason for the out-of-control point has been found and eliminated. Control strategies should be used to help find the reasons for out-of-control points. It may be that the instrument needs to be re-calibrated. There are many other reasons that the test method could be out of control.

Step 4: Determine the accuracy of the test method.

In this example, the test method is not in control with respect to X. If it were, the average could be compared to the true value of the standard. However, in this case, the true value of the moisture content of the resin sample is not known. We simply assume that the average is the "true" value and monitor the test method versus this average in the future. Again, the chart must be in control before making this comparison. The following definition for an accurate test method is based on using an individuals control chart.

Step 5: Determine the precision of the test method.

What causes variation between the individual results? The same standard is being used all the time so this does not cause variation, unless the standard changes. The variation is caused by the test method itself (including different technicians). The range chart must be in statistical control before you can calculate this standard deviation.

For this example, the range chart is in control. The estimate of the test method standard deviation is then:

Step 6: Determine the percent of total process variation due to the test method.

To determine this percent, some estimate of the total variance is required. The best estimate would be from a range chart kept on the quality parameter (in this case, moisture content) in the operating unit. If the operating unit is not keeping a chart on the quality parameter, you can take a month's worth of data from the unit and calculate a variance.

Assume that a control chart has been kept in the operating unit. The standard deviation, st, has been calculated from the average range to be 0.025. In this case, the percent of total variance due to the test method is:

A precise test method is defined as a test method that is in statistical control with respect to variation (i.e., the range chart) and that is responsible for less than 10% of the total process variance.

The final judge on what makes a test method precise should be the customer.

Step 7: Continue to monitor the accuracy and precision of the test method over time.

The control limits on the chart should be extended into the future. The standard should be run regularly. If any out-of-control situations occur, the reasons should be found and the cause eliminated. Continuous monitoring of the test method will ensure that results are accurate and precise. After 100 standards have been run, the control limits should be recalculated to give better estimates of the averages.

The X chart for the moisture data is shown above.

The moving range chart for the moisture data is shown above.