Much of the data we deal with, day in and day out, are measurements – things like purity, density, time, speed, width or length.  We can measure these items to any precision – depending on our measurement system of course.  We have many control charts that can handle variables data including the individuals control chart, the X-R control chart and the X-s.  These are called variable control charts and are the most common type of control charts in use.

Sometimes though our data consists of counts – things like the number of invoices with errors, the number of injuries in a plant, or the number of infections in a hospital.  These counts usually represent something that is wrong – a defective item or a defect in something.  There are control charts that are commonly used to handle count data – the p, np, c and u control charts.  These are called attribute control charts.  But, they are used in many situations where they should not be!  It actually gets quite messy to figure out if you're using an attributes control chart is the right thing to do.

You can download a pdf version of this publication here.

If you have yes/no data, you will use either a p control chart or an np control chart to examine the variation in the fraction of items not meeting a preset specification in a group of items.  For example, you might be measuring the fraction of invoices with errors each day.  Your subgroup consists of the invoices and you count the number of invoices with errors.  An invoice either has no errors (good) or one or more errors (bad).  You would use a p control chart if the subgroup size (the number of items examined in a given time period) changes over time. You would use the np control chart if the subgroup size stays the same.

With counting data, you count the number of defects in an area.  A defect occurs when something does not meet a preset specification. It does not mean that the item itself is defective.  When looking at counting data, you end up with whole numbers such as 0, 1, 2, 3; you can't have half of a count.  For example, you might be measuring the number of injuries in a plant each month. 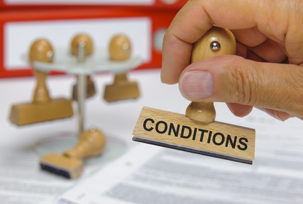 For example, with yes/no data, the following conditions must be met:

For counting data, the following conditions must be met. 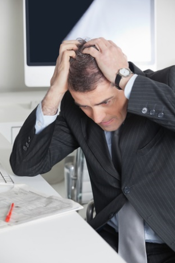 For example, the control limits for the np control chart are given by:

where n = subgroup size, np is the average number defective and p is he average divided by n.

where c is the average number of defects.

where X is the overall average for X and R is the average moving range.

So, wouldn’t it be nice to be able to use the individuals control chart in place of attribute control charts?  Not having to worry if all those conditions are met?  Let’s find out if we can.

Remember the red bead experiment.  The red bead experiment is an example of yes/no data that can be tracked using an np control chart. In this experiment, each worker is given a sampling device that can sample 50 beads from a bowl containing white and red beads. The bowl contains about 80% white beads and 20% red beads.  The objective is to get all white beads. In this case, a bead is "in-spec" if it is white. It is "out of spec" if it is red. So, we have yes/no data - only two possible outcomes. In addition, the subgroup size is the same each time, so we can use an np control chart.

Data from one red bead experiment are shown below in Table 1. The numbers represent the number of red beads each person received in each sample of 50 beads.

Does this situation satisfy the four conditions for using an np control chart? 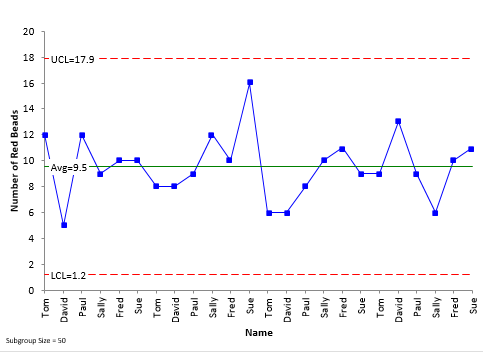 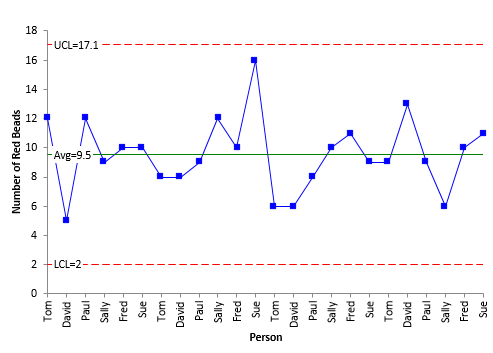 Note that the same points are plotted on each chart and that the average for the X control chart is the same as for the np control chart.  The only difference between these two charts is how the control limits are calculated.

Consider the data in Table 2 for the number of defects.  These data were generated randomly for Poisson distribution with an average of 5. 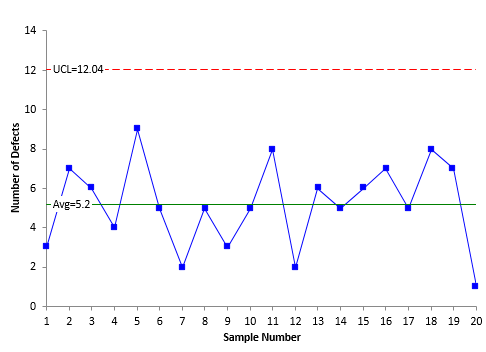 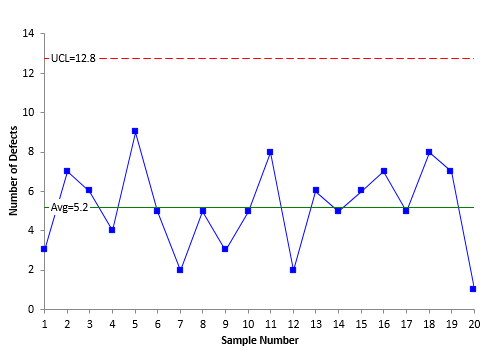 The average in both charts in Figure 3 and 4 is 5.2.  Again, the only difference is the way the control limits are calculated.  The UCL is 12 for the c control chart and 12.8 for the X control chart.  Once again, there is very little difference.