You have a set of data. You would like to know if it fits a certain distribution - for example, the normal distribution. Maybe there are a number of statistical tests you want to apply to the data but those tests assume your data are normally distributed? How can you determine if the data are normally distributed. You can construct a histogram and see if it looks like a normal distribution. You could also make a normal probability plot and see if the data falls in a straight line.  We have past newsletters on histograms and making a normal probability plot.  There is an additional test you can apply. It is called the Anderson-Darling test and is the subject of this month's newsletter.

We have included an Excel workbook that you can download to perform the Anderson-Darling test for up to 200 data points.  It includes a normal probability plot.

You can download the workbook containing the data at this link.

The two hypotheses for the Anderson-Darling test for the normal distribution are given below:

H1: The data do not follow the normal distribution

In many cases (but not all), you can determine a p value for the Anderson-Darling statistic and use that value to help you determine if the test is significant are not. Remember the p ("probability") value is the probability of getting a result that is more extreme if the null hypothesis is true. If the p value is low (e.g., <=0.05), you conclude that the data do not follow the normal distribution. Remember that you chose the significance level even though many people just use 0.05 the vast majority of the time. We will look at two different data sets and apply the Anderson-Darling test to both sets.

The first data set comes from Mater Mother's Hospital in Brisbane, Australia. The data set contains the birth weight, gender, and time of birth of 44 babies born in the 24-hour period of 18 December 1997. The data were explained using four different distributions. We will focus on using the normal distribution, which was applied to the birth weights. The data are shown in the table below.

The second set of data involves measuring the lengths of forearms in adult males. The 140 data values are in inches. The data is given in the table below.

where n = sample size, F(X) = cumulative distribution function for the specified distribution and i = the ith sample when the data is sorted in ascending order.  You will often see this statistic called A2.

To demonstrate the calculation using Microsoft Excel and to introduce the workbook, we will use the first five results from the baby weight data. Those five weights are 3837, 3334, 3554, 3838, and 3625 grams. You definitely want to have more data points than this to determine if your data are normally distributed. We will walk through the steps here.  You can download the Excel workbook which will do this for you automatically here: download workbook. Of course, the Anderson-Darling test is included in the SPC for Excel software.

The data are placed in column E in the workbook. After entering the data, the workbook determines the average, standard deviation and number of data points present The workbook can handle up to 200 data points.

The next step is to number the data from 1 to n as shown below.

To calculate the Anderson-Darling statistic, you need to sort the data in ascending order. This is done in column G using the Excel function SMALL(array, k). This function returns the kth smallest number in the array. The sorted data are placed in column G.

Now we are ready to calculate F(Xi). Remember, this is the cumulative distribution function. In Excel, you can determine this using either the NORMDIST or NORMSDIST functions. They both will give the same result. We will use the NORMDIST function. The workbook places these results in column H.

The formula in cell H2 is "=IF(ISBLANK(E2),"",NORMDIST(G2, $B$3, $B$4, TRUE))". This formula is copied down column H. The average is in cell B3; the standard deviation in cell B4. Using "TRUE" returns the cumulative distribution function.

Take a look again at the Anderson-Darling statistic equation:

We are now ready to calculate the summation portion of the equation. So, define the following for the summation term in the Anderson-Darling equation:

This result is placed in column K in the workbook.

We are now ready to calculate the Anderson-Darling statistic. This is given by:

The value of AD needs to be adjusted for small sample sizes. The adjusted AD value is given by:

For these 5 data points, AD* = .357. The workbook has the following output in columns A and B:

The last entry is the p value.  That depends on the value of AD*.

The p Value for the Adjusted Anderson-Darling Statistic

The calculation of the p value is not straightforward. The reference most people use is R.B. D'Augostino and M.A. Stephens, Eds., 1986, Goodness-of-Fit Techniques, Marcel Dekker. There are different equations depending on the value of AD*. These are given by:

The workbook (and the SPC for Excel software) uses these equations to determine the p value for the Anderson-Darling statistic.

Now let's apply the test to the two sets of data, starting with the baby weight. The question we are asking is - are the baby weight data normally distributed?" The results for that set of data are given below. 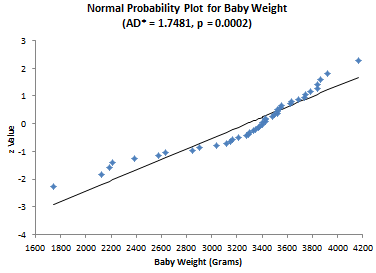 Now consider the forearm length data.  Again, we are asking the question - are the data normally distributed?  The results for the elbow lengths

Since the p value is large, we accept the null hypotheses that the data are from a normal distribution. The normal probability plot shown below confirms this. 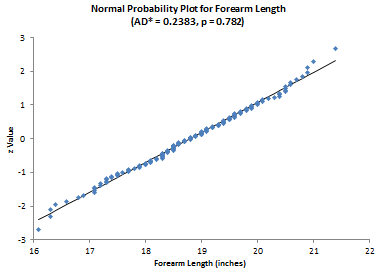 The workbook contains all you need to do the Anderson-Darling test and to see the normal probability plot.