Are the Skewness and Kurtosis Useful Statistics?

Note: This article was originally published in April 2008 and was updated in February 2016.  The original article indicated that kurtosis was a measure of the flatness of the distribution – or peakedness.  This is technically not correct (see below).  Kurtosis is a measure of the combined weight of the tails relative to the rest of the distribution.  This article has been revised to correct that misconception.  New information on both skewness and kurtosis has also been added.

You have a set of samples.  Maybe you took 15 samples from a batch of finished product and measured those samples for density.  Now you are armed with data you can analyze.  And your software package has a feature that will generate the descriptive statistics for these data.  You enter the data into your software package and run the descriptive statistics.  You get a lot of numbers – the sample size, average, standard deviation, range, maximum, minimum and a host of other numbers.  You spy two numbers: the skewness and kurtosis.  What do these two statistics tell you about your sample?

Skewness and kurtosis are two commonly listed values when you run a software’s descriptive statistics function.  Many books say that these two statistics give you insights into the shape of the distribution.

Skewness and kurtosis involve the tails of the distribution.  These are presented in more detail below.

Skewness is usually described as a measure of a dataset’s symmetry – or lack of symmetry.   A perfectly symmetrical data set will have a skewness of 0.   The normal distribution has a skewness of 0.

where n is the sample size, Xi is the ith X value, X is the average and s is the sample standard deviation.  Note the exponent in the summation.  It is “3”.  The skewness is referred to as the “third standardized central moment for the probability model.”

Most software packages use a formula for the skewness that takes into account sample size:

This sample size formula is used here.  It is also what Microsoft Excel uses.  The difference between the two formula results becomes very small as the sample size increases. 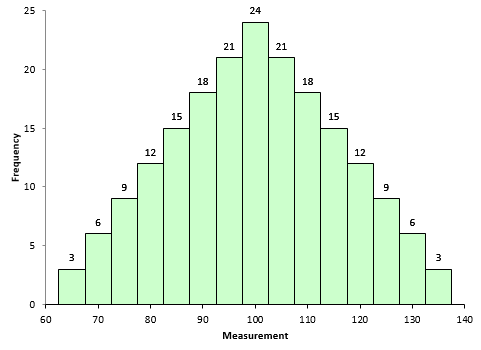 A truly symmetrical data set has a skewness equal to 0.  It is easy to see why this is true from the skewness formula. Look at the term in the numerator after the summation sign.  Each individual X value is subtracted from the average.  So, if a set of data is truly symmetrical, for each point that is a distance “d” above the average, there will be a point that is a distance “-d” below the average.

To explore positive and negative values of skewness, let’s define the following term: 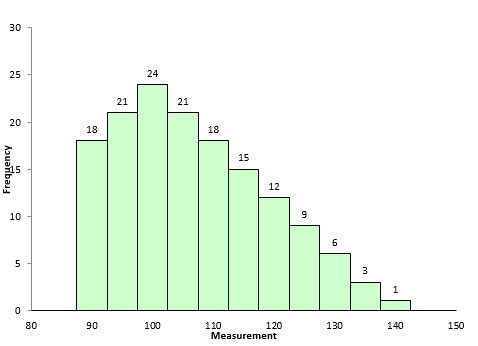 Figure 3 is an example of dataset with negative skewness.  It is the mirror image essentially of Figure 2.  The skewness is -0.514.   In this case, Sbelow is larger than Sabove.  The left-hand tail will typically be longer than the right-hand tail. 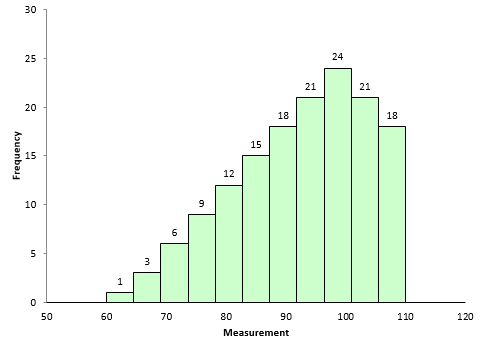 So, when is the skewness too much?  The rule of thumb seems to be:

How to define kurtosis?  This is really the reason this article was updated.  If you search for definitions of kurtosis, you will see some definitions that includes the word “peakedness” or other similar terms.  For example,

You can find other definitions that include peakedness or flatness when you search the web.  The problem is these definitions are not correct.  Dr. Peter Westfall published an article that addresses why kurtosis does not measure peakedness (link to article).  He said:

“Kurtosis tells you virtually nothing about the shape of the peak – its only unambiguous interpretation is in terms of tail extremity.”

Dr. Westfall includes numerous examples of why you cannot relate the peakedness of the distribution to the kurtosis.

Dr. Donald Wheeler also discussed this in his two-part series on skewness and kurtosis.  He said:

“Kurtosis was originally thought to be a measure the “peakedness” of a distribution.  However, since the central portion of the distribution is virtually ignored by this parameter, kurtosis cannot be said to measure peakedness directly.  While there is a correlation between peakedness and kurtosis, the relationship is an indirect and imperfect one at best.”

“The kurtosis parameter is a measure of the combined weight of the tails relative to the rest of the distribution.”

Kurtosis is defined as:

where n is the sample size, Xi is the ith X value, X is the average and s is the sample standard deviation.  Note the exponent in the summation.  It is “4”.  The kurtosis is referred to as the “fourth standardized central moment for the probability model.”

Here is where is gets a little tricky.  If you use the above equation, the kurtosis for a normal distribution is 3.  Most software packages (including Microsoft Excel) use the formula below.

Look back at Figures 2 and 3.  They are essentially mirror images of each other.  The skewness of these datasets is different: 0.514 and -0.514.  But the kurtosis is the same.  Both have a kurtosis of -0.527.  This is because kurtosis looks at the combined size of the tails.

The kurtosis decreases as the tails become lighter.  It increases as the tails become heavier.  Figure 4 shows an extreme case.  In this dataset, each value occurs 10 times.  The values are 65 to 135 in increments of 5.  The kurtosis of this dataset is -1.21.  Since this value is less than 0, it is considered to be a “light-tailed” dataset.  It has as much data in each tail as it does in the peak.  Note that this is a symmetrical distribution, so the skewness is zero. 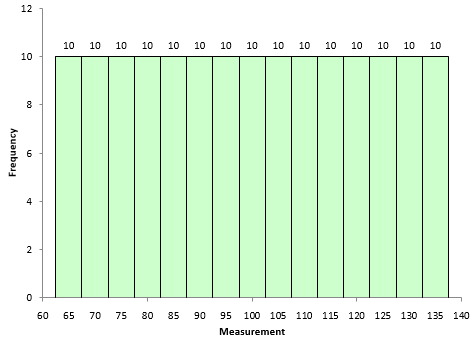 Figure 5 is shows a dataset with more weight in the tails.  The kurtosis of this dataset is 1.86. 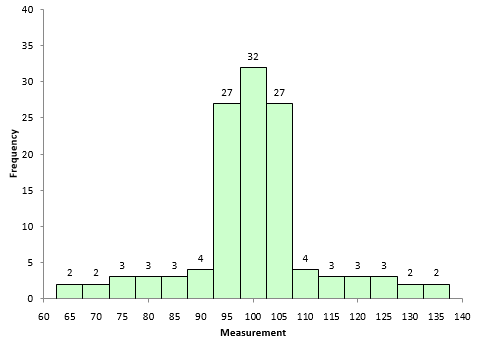 The problem with both skewness and kurtosis is the impact of sample size.  This is described below. 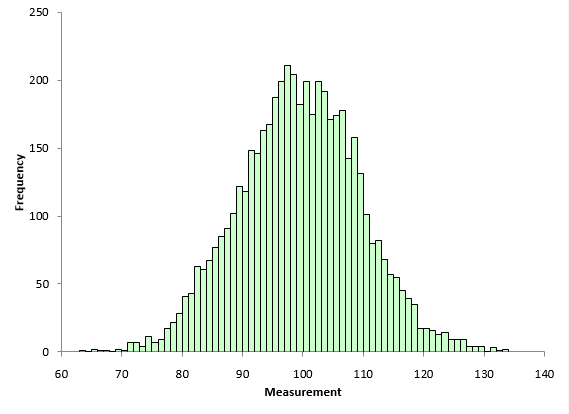 Impact of Sample Size on Skewness and Kurtosis

Table 1: Impact of Sample Size on Skewness and Kurtosis

Notice how much different the results are when the sample size is small compared to the "true" skewness and kurtosis for the 5,000 results. For a sample size of 25, the skewness was -.356 compared to the true value of 0.007 while the kurtosis was -0.025. Both signs are opposite of the true values which would lead to wrong conclusions about the shape of the distribution. There appears to be a lot of variation in the results based on sample size.

Figure 7 shows how the skewness changes with sample size.  Figure 8 is the same but for kurtosis. 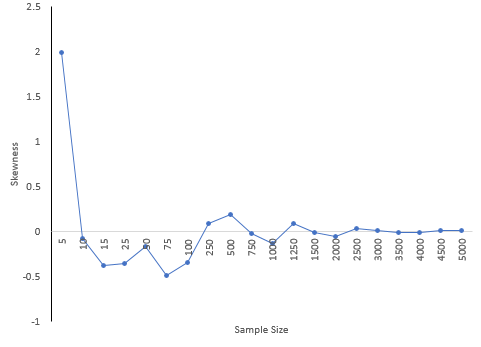 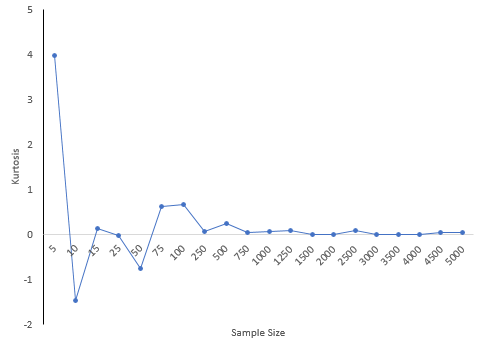 30 is a common number of samples used for process capability studies. A subgroup size of 30 was randomly selected from the data set. This was repeated 100 times. The skewness varied from -1.327 to 1.275 while the kurtosis varied from -1.12 to 2.978. What kind of decisions can you make about the shape of the distribution when the skewness and kurtosis vary so much? Essentially, no decisions.

The skewness and kurtosis statistics appear to be very dependent on the sample size. The table above shows the variation. In fact, even several hundred data points didn't give very good estimates of the true kurtosis and skewness. Smaller sample sizes can give results that are very misleading. Dr Wheeler wrote in his book mentioned above:

Walter Shewhart was the "Father" of SPC. So, don't put much emphasis on skewness and kurtosis values you may see. And remember, the more data you have, the better you can describe the shape of the distribution.  But, in general, it appears there is little reason to pay much attention to skewness and kurtosis statistics.  Just look at the histogram.  It often gives you all the information you need.

To download the workbook containing the macro and results that generated the above tables, please click here.