The Impact of Statistical Control

Statistical control, stability, consistent and predictable. What do these terms mean? Are they really important to us? The answer is yes! And it has an impact on you if you ever do any of the following:

Basically, if you use statistics for analysis, the concepts of statistical control and stability are very important. Many people do these things on a regular basis. But none of the above statistics have any meaning unless the process that generates them is stable - in control. A reader from last month's e-zine on histograms reminded me that I should have emphasized this point. Using a histogram for decision making and data analysis is good - but only if the process that generated the histogram is consistent over time. And how do we know that? Only through control charts.

How do control charts work and why are they important? The answers to these questions really affect how well you use data. This month's e-zine takes an in-depth look at how a control chart works and why the control chart is an invaluable tool.

Suppose you have just been put in charge of a bagging operation. The process involves putting sand into bags. The target for the bag weight is 50 pounds with a tolerance of +/- 2 pounds. You understand that there have been concerns about the variability in the bag weights. You want to understand what this variability is and determine how to reduce it. How would you go about that? What are some of the questions you might want to answer?

The keywords in the questions above are "stay the same over time." You can do any of the calculations above - find the average, the standard deviation, construct a histogram, calculate the Cpk value. But none of these have any meaning unless your process is stable - in statistical control.

You could start by going to the process and weighing one bag. Suppose this bag weighs 50.1 pounds. Is this a good estimate of the population average? You probably will not think taking one sample is a very good method of estimating the average. Obviously, you will need more samples.

You decide to take 5 bags and calculate the average weight of those five bags as shown below.

But suppose you decide to continue this process. Each hour you take 5 bags and weigh them. These 5 bags that are taken each hour are called a subgroup. The average you calculate is called the subgroup average.

The data you have for the first 20 hours are given below. The average is given along with the range, which we will use later when we discuss variation of individual results. 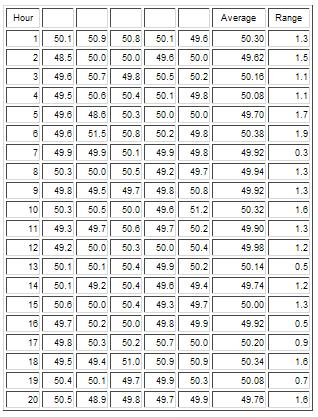 The averages are not the same for each set of 5 bags. The average seems to bounce around. The average of these 100 bag is 50.02. With this many samples, you might feel that this is a good estimate of what the bagging processes produces - that 50.02 is a good estimate of the unknown population average. But, in reality, you don't know this yet because you have not addressed the issue of statistical control. An average has no meaning unless the process is consistent and predictable.

The Average Over Time

In general, if all the results fall between LCL and the UCL and there is no evidence of nonrandom patterns, the process is in statistical control, i.e., only common cause variation is present. This means the bagging process is consistent and predictable. You know what it will do (and not do) in the future. In this example, a bag of sand will weigh between 49.33 and 50.71 with a long term average of 50.02. And since there are only common causes of variation present, this will not change as long as the process stays the same.

So, we have answered question 1 using the Xbar chart. Our estimate of the population average is 50.02. In addition, we have answered part of question 4. This average will not change as long as the process stays the same and there are no special causes of variation. Special causes of variation could include new operators, different sand supplier, etc.

The Variation Around the Average

To determine this, you can use the range values that are given in the table above. For each of the 5 bag weights, you determine the subgroup average. You can also calculate a range value for each subgroup. The range is simply the maximum value - minimum value. For the first subgroup, the range is

This range value is a measure of the variation between individual values - the maximum and the minimum.

The Range Over Time

You can plot the range values over time. The range values are shown in this figure. This chart shows the within subgroup variation and how that varies from subgroup to subgroup. You can enhance this chart by adding the average range (called Rbar) and the control limits.

In this example, the range only has an UCL. Again, since there are no patterns and no points beyond the control limits, the process just has common causes of variation present. It is consistent and predicable. This means the variation in the individual values about the average is the same over time.

So, we have answered question 2 using the range chart. The variation in individual values is 0.512, the estimate of the population standard deviation. We have also answered the last part of question 4. This variation will not change as long as the process stays the same and there are no special causes introduced. Remember, a standard deviation has no meaning unless the process is consistent and predictable (in control).

The Shape and Specs

And finally, questions 3 and 5 - what does the shape of the variation look like and how does it compare to specifications? The shape of the variation comes from the histogram (see our December 2005 and January 2006 e-zines on histograms). Comparing to specification is handled using a process capability analysis (see our three part e-zine starting October 2004). The histogram/process capability analysis for this data is shown in the figure. The process is capable of meeting specifications. And since it is in control, it will continue to do so over time until the process changes.

And remember, like the average and the standard deviation, the histogram and value of Cpk have no meaning unless the process is consistent and predictable.

This is why it is so important to understand control charts and statistical control.

The chart shown above will produce the same average and the same calculated standard deviation as the first Xbar chart shown on bag weight. But doesn't it tell a different story? So simple. Just plot the data over time and you will be amazed at what you learn.