Surveys! Our organizations seem to use surveys quite often to "measure" things - customer service, employee satisfaction, customer satisfaction, etc., etc., etc. And we get surveys all the time! Every day, in my inbox, there is usually at least one survey.

Surveys are all over the place. How does your organization analyze and use the results of surveys? This month's newsletter takes a look at how statistical process control can be used to help analyze survey results.

There are many types of survey. Some include rating performance on different scales, such as 1 to 4 or 1 to 10. Others want you to compare something to something else - like their product to a competitor's product. Others want you to actually write a comment. Many are a combination of the above.

To take a look at how statistical process control (SPC) can be used to help analyze survey results, we will use a simple survey. Suppose we want to measure how "satisfied" our employees are. We develop a survey with 15 different statements that we think will provide us feedback on employee satisfaction.

Now that we have our statements that reflect "satisfied" employees, we are ready to add our "measurement" system. We will ask respondents to rate each statement according to the following:

Now we are ready to send out to our employees. Suppose we randomly select 200 employees to fill out the survey. And to keep things simple, each of these 200 actually get filled out and sent back it to us to analyze. How do we analyze the results?

Our survey results are shown in Table 1 below. These results are from an actual survey but the numbers have been changed a little to give us 200 responses per question.

The table lists of the number of responses for each rating. For example, for the first statement, there were 27 people who rated it as a 1 ("Strongly Disagree"); 22 rated it as a 2 ("Disagree") and so forth. You can scan through the table and get a feel for those statements that have a larger amount of "disagree" ratings and those that have a larger amount of "agree" ratings. But how can we analyze these results statistically using control charts?

Others may analyze the results by calculating an average - the higher the average, the more favorable the response since the ratings increase from 1 to 5. Some say you can't calculate an average for this type of data because they are not continuous. The distance between strongly disagree and disagree is not the same as between disagree and neutral, so an average doesn't mean much. But, some do it anyway.

These two approaches are common. We will compare both approaches and see what the results tell us. We will start with the % unfavorable and % favorable approach.

Statement 15 has the highest unfavorable rating, followed by Statement 1. Should these be worked on? Are they significantly different from the other responses? What about statements 3, 2 and 11, 12? Should they be worked on?

The % unfavorable control chart for the 15 statements is shown in Figure 1. 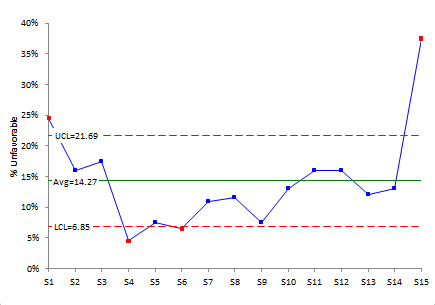 "Are any of the statement ratings significantly different from the other statements?"

Note that there are also two points below the lower control limits - for statements 4 and 6. This means that these two questions were rated significantly less unfavorable than the other questions. Less unfavorable? A little confusing perhaps, but you really don't worry about these. You use the % favorable control chart to see if any statements are rated significantly higher on favorability.

Figure 2 shows the p control chart for % Favorable. There are three questions that rated significantly higher on % Favorable: statements 4, 5 and 6. Whatever you are doing on these, keep doing it! And see if it can be spread to the other statements. 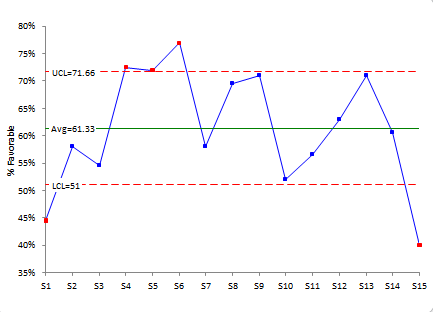 And, for the purists around, the p control chart may not be valid theoretically. To use a p control chart, the probability that each question will be rated favorably must be the same. This is probably not the case. But despite these shortcomings, this approach will be very useful for some in analyzing their surveys. And the control chart as a picture of the results is a great way to view the results.

In this approach, the average and standard deviation for each statement are calculated. The results for the survey data are shown in Table 4. 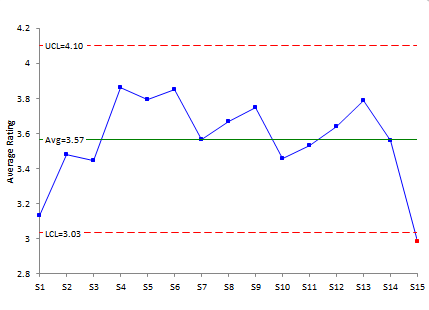 With this approach, only statement 15 is out of control. It is below the lower control limit. This means that statement 15 has a significantly lower average than the other questions.

So, the individuals control chart did give an indication of differences in the statements - though not as many as the p control chart.  This will vary depending on the number of responses you have.

In general, I like the p control chart approach if it can be used. Most often, this will be determined d by the number of responses you have - normally 50 to 300 is a great range. But sometimes you won't be able to do that. In that case, try the average approach. The average and % favorable are usually correlated when using the 1 to 5 rating system shown above. Figure 4 shows a scatter diagram for the average and % favorable for these data. 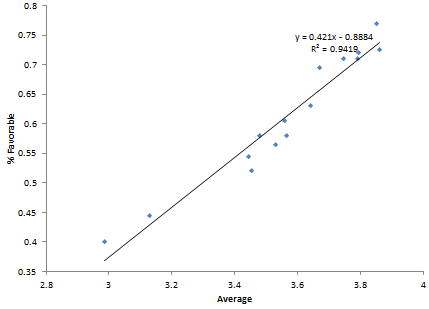 There is a strong correlation between the statement average and the % favorable rating for the statement. This also gives some credence to using the average method.

This newsletter has taken a look at how control charts can be used to analyze survey results. The basic premise is to find a tool that can separate the signals in the survey from the noise. Control charts can do that under certain situations. Two approaches were analyzed: the p control chart approach using % favorable or % unfavorable and the individuals control chart using the average rating. Both approaches can give insight into the survey results. One of the biggest advantages is simply plotting the results and taking a look at them.